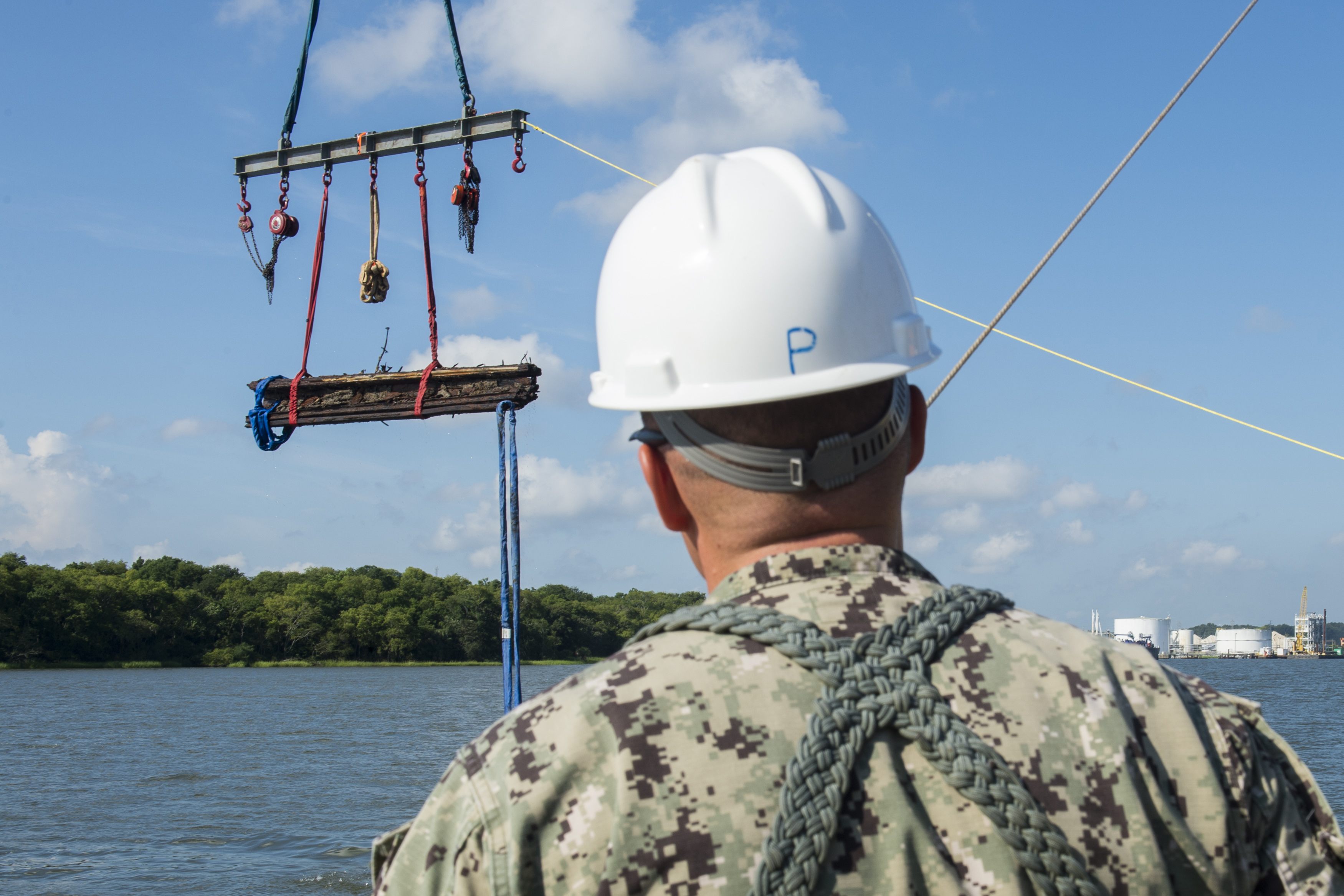 SAVANNAH, Georgia -- After 150 years at the bottom of the Savannah River, the armored skeleton of the Confederate warship CSS Georgia is being raised to the surface one 5-ton chunk at a time.

Navy divers who began working in late June to recover cannons, unexploded shells and other artifacts from the riverbed finally started midweek on their last major task - retrieving an estimated 250,000 pounds of the Civil War ironclad's armored siding.

The CSS Georgia was scuttled by its own crew to prevent Gen. William T. Sherman from capturing the massive gunship when his Union troops took Savannah in December 1864 from forces supporting the secessionist Confederacy of pro-slavery southern states. Still classified as a captured enemy vessel by the Navy, the remains of the Confederate ironclad are being salvaged as part of a $703 million deepening of the Savannah harbor for cargo ships.

"The historical significance is evident in everything we do," Chief Warrant Officer 3 Jason Potts, the Navy's on-scene commander, said Wednesday as his crew prepared to start raising the first of three giant slabs of armor.

The CSS Georgia was a crude example of the first armored warships designed during the Civil War to stand up to cannon and artillery fire. Its 1,200-ton frame was built using three layers of timber topped with 24-foot strips of railroad iron.

Having sections of the Georgia's armor for study should reveal more about how the Confederacy compensated for the South's lack of an industrial base when it came to building ships and other war machines.

"A lot of these ironclads are built by house carpenters, they're not built by shipwrights," said Jeff Seymour, historian and curator for the National Civil War Naval Museum in Columbus. "So what are the construction techniques? They vary from ship-to-ship."

The Georgia proved so bulky its own engines were too weak to propel it against the Savannah River's currents. The Confederates anchored the ironclad off Old Fort Jackson as a floating gun battery. It was sunk without ever firing a shot in combat.

Their first task was to raise 132 unexploded shells - both cannonballs and rifle shells shaped like large bullets - found scattered across the wreckage site. Using a crane mounted on a barge, they also pulled up four cannons.

Other artifacts soon emerged from 40 feet or more of water: a flywheel, a pump and sections of the steamship's boiler. Perhaps most impressive, the Georgia's propeller was recovered intact and still attached to the long shaft that turned it.

"We don't just simply want to bring it all back to the surface," Potts said. "We want to bring it back intact. So we go to the maximum effort to make sure we don't rip these things apart on the way up."

The three large sections of the Georgia's armored casemate, however, proved too heavy to raise without cutting them down into smaller pieces. They're being separated into about 20 total chunks, each measuring about 4 feet by 24 feet and weighing roughly 5 tons.

After a century and a half, Potts said, most of the ship's wooden hull has rotted away. But the railroad iron remains essentially glued together by mud and silt from the riverbed. The crew uses a crane-held tool with a long, flat blade to slide between the iron strips and pry apart chunks of the armor.

A web of slings is then attached to the slab of armor to ensure its weight is evenly distributed as the crane lifts it from the river.

With river currents typically limiting divers to less than three hours underwater each day, Potts estimates it will take his team nearly a month to raise all of the armored siding. That's at a rate of roughly one 5-ton chunk per day.

All artifacts from the CSS Georgia are being sent to the Conservation Research Laboratory at Texas A&M University in College Station, Texas, for cataloging and preservation. The Navy hasn't said where those artifacts will ultimately reside.

According to CBS affiliate WTOC, once the ship is gone, crews will start deepening the river as part of the Savannah Harbor Expansion Project.