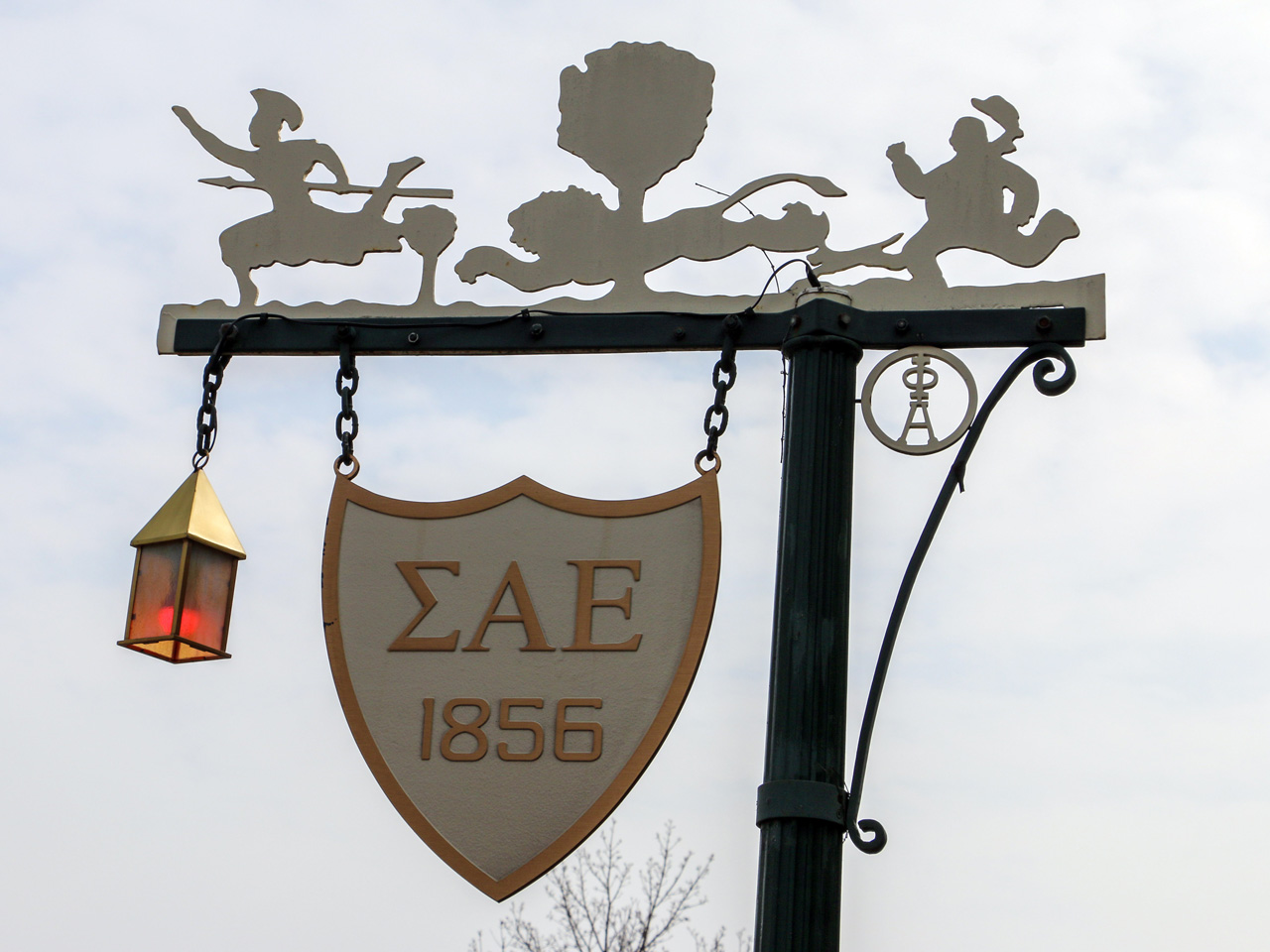 Sigma Alpha Epsilon's international headquarters may be in Illinois, but the fraternity's roots are firmly planted in the antebellum South. "We came up from Dixie land," says a ditty from an old songbook, boasting about SAE's success.

Now, nearly 160 years after its founding at the University of Alabama, another song - this one chanted by members of the frat's University of Oklahoma chapter and containing racial slurs and lynching references - hearkens back to the bad old times in the land of cotton and puts a new spotlight on the group's activities over the years.

SAE began on the Tuscaloosa campus on March 9, 1856, a few months after Noble Leslie DeVotie outlined his vision to a close circle of friends during a stroll along the banks of the Black Warrior River.

The initial members visualized "a bond which would hold them together for all time," William C. Levere wrote in a 1916 history of the fraternity. "So it came about that in the late hours of a stormy night, the friends met in the old southern mansion and by the flicker of dripping candles organized Sigma Alpha Epsilon."

More chapters were soon launched in Tennessee, North Carolina and even Washington, D.C., at what is now George Washington University. But the founders weren't interested in a national presence.

According to Levere, it was their intention "to confine the fraternity to the southern states." When a North Carolina chapter member raised the topic of a "Northern Extension," charter member Thomas Chappell Cook - who later served as a surgeon in the Confederate army - responded that "the constant agitation of the slavery question was a barrier to northern chapters, as it would preclude the possibility of harmony."

The Civil War soon put an end to the internal debate.

The fraternity's charter was surrendered in 1861 because of the fighting. The Washington City Rho chapter was the only one to emerge from the war intact. SAE would not return to its birthplace until 1886, after the Reconstruction-era ban on "secret societies" was relaxed and the school's trustees, in the words of Levere, repealed "its obnoxious anti-fraternity laws."

In the meantime, the fraternity had granted its first Northern charter in 1883 to, of all schools, Pennsylvania College - the abolitionist institution now known as Gettysburg College.

The editors of the New Encyclopedia of Southern Culture call SAE "the first Greek-letter society founded in Dixie to take permanent root ..." Even in those early years, the fraternity sought to prove that it's more than just a provincial organization.

SAE was proud to claim President William McKinley as a member at Ohio's Mount Union College - even though it was an honorary initiation that came long after McKinley's college days. In December 1930, the fraternity dedicated its international headquarters in the Chicago suburb of Evanston.

But, like other fraternities North and South, SAE had not yet embraced racial diversity.

In his 2013 book, "The People's Advocate," attorney Daniel P. Sheehan claims credit for championing the bid of Tommy Williamson, who he wrote was "the first black man to ever receive a nomination for membership in SAE in the entire history of that old, traditional southern fraternity."

According to Sheehan, he was social chairman of SAE's Harvard chapter in 1966. He and Williamson, a defensive lineman on the Crimson football team, both lived at Kirkland House, and Williamson's was the first name he called when it was time to vote for new members.

Sheehan then announced he would blackball every other nominee until whoever had blocked Williamson "fessed up and gave us their reasons," he wrote. It took six more ballots for a member to admit that he was voting against Williamson because he'd heard that the Piedmont, California, native "dated white women."

Sheehan said Williamson's nomination was approved on the seventh ballot. But when Sheehan told him how the vote had gone down, he wrote, Williamson declined the invitation.

Reached by telephone Tuesday, Williamson, who practices employment law in Washington, D.C., told The Associated Press that he wasn't really all that interested in joining a fraternity, especially if some members didn't want him.

"I didn't want to be the sort of obsessive token negro that, wherever you could be the first black person to do something, you would do that just because you thought white people thought that would help move their organization ahead," he said.

In a phone interview Tuesday, Sheehan, who practices constitutional law and teaches at the University of California, Santa Cruz, said of the Oklahoma video: "That's pretty stunning, actually. I'm glad they shut that chapter down."

Brandon Weghorst, an SAE spokesman, was unable to say whether Williamson was indeed the first black man formally invited to join a chapter. "Only within the last couple of years has the organization started to track the ethnicity of people who join the organization," he said.

SAE has had its share of controversy in more recent years.

In 1988, the founding chapter was suspended again - this time for violations of the university's drug codes. The suspension was lifted two years later, only to be levied again in 1992 when the chapter failed to meet the goals outlined for reinstatement.

Most of the actions taken against SAE in the past have been for infractions of a non-racial nature. But the University of Oklahoma video is not an isolated incident.

-In October 2006, the University of Memphis chapter was investigated after a freshman member complained that his brothers made inappropriate remarks to and about his black girlfriend. Two members were later suspended.

-In February 2013, Washington University in St. Louis suspended its SAE chapter while investigating claims that pledges engaged in racially offensive behavior toward minorities.

-In December 2014, Clemson University suspended the frat after a gang-themed "Cripmas party" at which white members dressed in T-shirts bearing images of handcuffs and the late rapper Tupac Shakur.

"Instead, we have implemented a holistic education known as the True Gentleman Experience," SAE says on its website. "It provides education throughout a member's collegiate tenure and fosters both personal and professional development."

On its website, Sigma Alpha Epsilon says its mission, based on ideals set forth by the founders, is "to promote the highest standards of friendship, scholarship, and service ..." The fraternity's creed, "The True Gentleman," specifies conduct that "proceeds from good will and an acute sense of propriety."

On Monday, the national organization suspended the Oklahoma chapter for failing to live up to that creed.