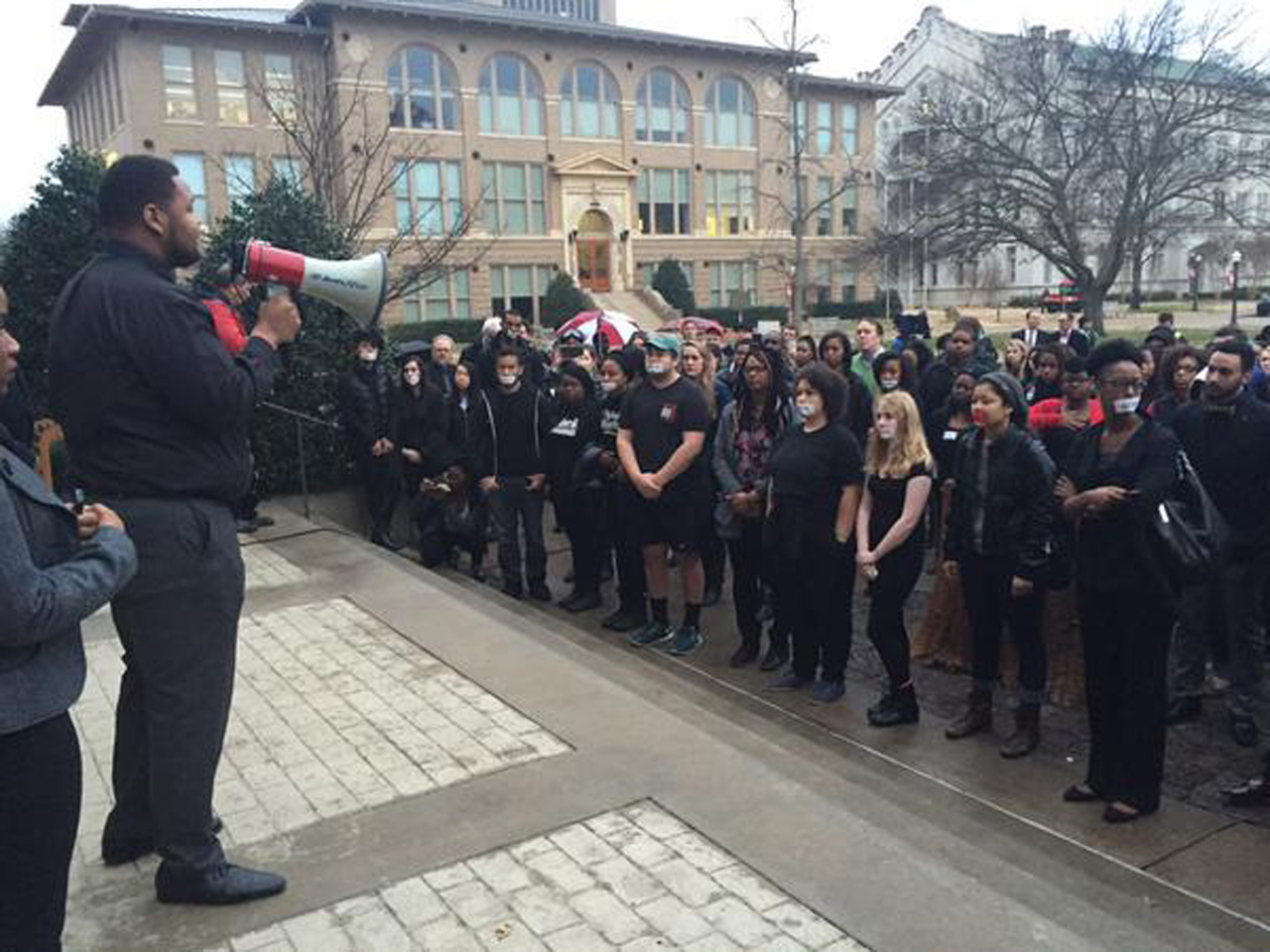 Sigma Alpha Epsilon said Sunday night that an investigation had confirmed the contents of a video showing multiple people chanting a racial slur against blacks and indicating that blacks would never be admitted to the fraternity. The chant also references lynching. The national fraternity said the local chapter would close.

The national fraternity said in a statement that it was "embarrassed" by the "unacceptable and racist" behavior.

President David Boren joined students at a pre-dawn rally on the Norman campus, just hours after the contents of the video were confirmed.

Later, at a press conference, Boren said "one of the things that breaks my heart about this" is that the school is actually a diverse and tolerant community.

"I think the best way for us to send not only a message to this campus but also across the country is (to show) that there's zero tolerance for this kind of racist behavior," Boren said. "Those students (in the video) will be out of that house and that house will be closed and as far as I'm concerned it won't be back, not as long as I'm president of the university."

The video was first posted online by a black student group at OU. It wasn't immediately clear how it was obtained.

Subsequently, a second video surfaced that appears to show someone on the bus waving as if to tell the people doing the recording to stop.

Separately, the Oklahoma State University student newspaper, the O'Colly, reported that, "At OSU's Sigma Alpha Epsilon house, (a) Confederate flag could clearly be seen hanging in a room through an open window on Sunday night. It was plainly visible from the sidewalk across the street."

The O'Colly quotes OSU SAE President Chris Bringaze as confirming that, "A brother who lives in our house displayed the Confederate flag in his personal room. Sigma Alpha Epsilon does not endorse the Confederate flag nationally nor do we endorse it as a chapter. In addition, the flag has never been a symbol of our fraternity. My fellow chapter leaders and I have asked the brother to remove the flag from his room."

Cameron Watkins, president of OSU's chapter of NAACP, told the newspaper the flag being displayed was in poor taste. "It seems foolish and disrespectful to (the) human race," he said.

Samuel Iroanya, a spokesman for the student group "OU Unheard," told CBS affiliate KWTV in Oklahoma City that some aspects of the incident don't make sense.

"If you watch the video, those chants were being chanted very passionately and we just wonder why would you have this much hatred in your heart for someone just based off the color of their skin," Iroanya said.

Ogbo Okoronkwo, a redshirt sophomore linebacker for the school's beloved football team, said on Twitter the behavior displayed in the video didn't match up with what he's experienced.

As for the video from the bus, the national fraternity said in a statement, "We apologize for the unacceptable and racist behavior of the individuals in the video, and we are disgusted that any member would act in such a way. Furthermore, we are embarrassed by this video and offer our empathy not only to anyone outside the organization who is offended but also to our brothers who come from a wide range of backgrounds, cultures and ethnicities."

The video was first posted online by a black student group at OU. It wasn't immediately clear how it was obtained.

KWTV reports the 10-second video clip first surfaced early Sunday afternoon and immediately went viral. The footage appears to have been shot by a passenger on a chartered bus with several members of the fraternity.

The station says the incident apparently happened on Saturday.

A student group has planned a peaceful protest at the University of Oklahoma's campus for Monday morning.

The closure of the local chapter of the Sigma Alpha Epsilon fraternity by the national branch appears to be a sharp fall from grace.

According to the website of the University of Oklahoma chapter, they were given the "John O. Moseley Zeal Award" in 2013, which "recognizes the chapter that best exemplifies a model chapter in Sigma Alpha Epsilon."

The award notification said: "This chapter excels in its operations and brotherhood, fulfilling the vision of our Founding Fathers and its members and by living the life of a true gentleman. This chapter goes above and beyond expectations and demonstrates true zeal and excitement for the Fraternity, exhibiting a strong bond of brotherhood. Oklahoma Mu is proud to be the only Sigma Alpha Chapter to have received our fraternities highest award for the third time."