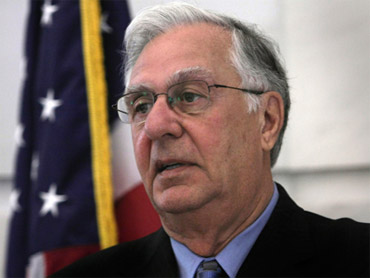 Former Republican House Majority Leader Dick Armey, one of the drivers of the Tea Party movement, is suggesting that Republican political candidates should shy away from the "Tea Party" label to avoid harsher scrutiny.

Armey's conservative nonprofit group FreedomWorks has facilitated Tea Party activists with guidance and resources, allowing for the growth of the movement that supports candidates like Kentucky's GOP Senate candidate Rand Paul and Nevada's GOP Senate candidate Sharron Angle. But Paul's and Angle's association with the Tea Party could be making their campaigns harder, Armey said, according to Politico.

"Don't ask for more of what you really don't want," Armey said Wednesday at an event sponsored by the Christian Science Monitor. "Since the left hates the Tea Party and they hate me, let's see if we can get 'em to double down on me by me claiming to be the leader of the Tea Party."

Democrats have tried to portray Paul and Angle as extreme candidates. Paul, for instance, came under scrutiny for questions about whether he supports the Civil Rights Act. Paul faced a litany of tough questions on the subject on MSNBC's "Rachel Maddow Show" -- going on the show in the first place was another mistake Paul made, Armey reportedly said.

"Rand Paul made an amateur mistake -- a freshman mistake, a rookie mistake," he said. "He thought MSNBC was a legitimate news operation. Bless his heart. If he had called me and said 'should I go on that show?' I would have said 'no, they're political hacks. They will abuse the truth purposefully for a political purpose.'"

Armey, Politico reports, said candidates like Paul should stick to interviews with local media outlets and Fox News, which has several hosts who are friendly to Republicans.

However, Angle has taken heat for largely avoiding reporters, and Democrats are suggesting Angle and Paul cannot survive questions from mainstream media because their ideas are out of the mainstream.

While Armey said Tea Party candidates should avoid the "Tea Party" label to avoid scrutiny from the press, blogger Allahpundit on the conservative blog Hot Air writes that Armey is surely aware of polls showing a downturn in public support for the Tea Party.