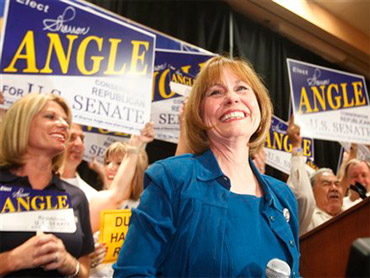 Nevada Republican Senate candidate Sharron Angle arrived in Washington today to meet with GOP officials and other supporters, but she avoided questions from reporters curious to learn more about the Tea Party-backed candidate who is taking on Senate Majority Leader Harry Reid.

Angle attended the Senate Republicans' weekly luncheon today as a guest of Nevada Sen. John Ensign, but she dodged a slew of questions reporters threw at her as she left the meeting. She only responded to one question -- when asked whether she was happy with the reception she received at the luncheon, Angle said, "Yes." (The Washington Post has audio of the questions here.)

Tomorrow, Angle is expected to meet with conservative activists in Washington.

Democrats have criticized the fact that some GOP congressional candidates, like Kentucky Senate candidate Rand Paul, have at times appeared to be avoiding the press.

After Angle defeated the establishment candidate in the Nevada GOP Senate primary, Democrats immediately started attacking some of her more extreme positions, such as her support for abolishing the Department of Education and phasing out Social Security.

One of Angle's goals during her trip to Washington, Politico reports, is to convince the Republican Party that she can shake off Democratic attempts to portray her as an extremist and run a viable campaign against Reid. Several Republicans reportedly told Politico that Angle's decision to only do a few select interviews with conservative media outlets is creating the impression that she is nervous about how her views will be received by the public. A media consultant for Angle reportedly acknowledged that such a perception "has to change."

Recent polls show Angle ahead of Reid, including a Rasmussen poll that puts her ahead 11 points and a Mason-Dixon poll in which she leads by three.

Meanwhile, Reid's office announced today that President Obama would travel to Nevada next month to help the senator campaign.