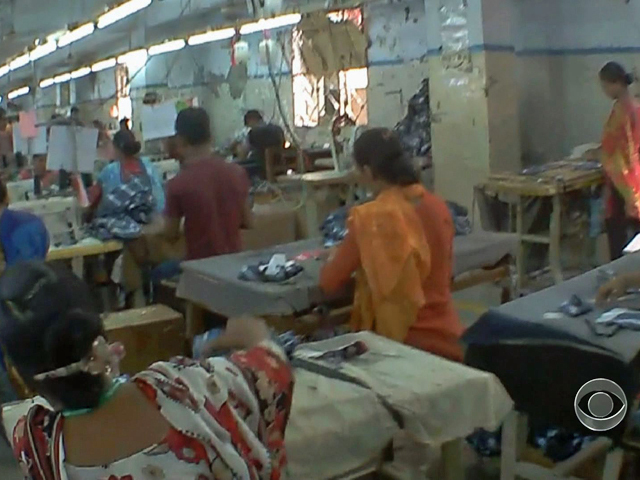 (CBS News) ISTANBUL - The Obama administration is punishing Bangladesh for the appalling conditions in factories that make clothes for America. In April, a factory collapsed killing more than 1,000 workers. A few months before that, more than 100 were killed in a fire.

On Thursday, the U.S. said it is suspending a deal that allows Bangladesh to export to the United States tax free. The safety violations were supposed to have been solved years ago when retailers required higher workplace standards from their suppliers. But look at what we found when we went to one approved factory called Monde Apparels.

The manager, Masudul Haq Chowdhury, assured us his factory was safe.

But we saw missing fire extinguishers and an emergency exit door blocked by boxes.

And though Chowdhury claimed that all of the workers were over 18, we found one who told us she was just twelve-years-old.

She and her mother, who also worked at the factory, asked us not to show their faces, because they feared they'd lose their jobs for speaking out.

After our interview, the mother told us that factory managers discovered her identity and then bullied her until she quit.

As a result of our report, her daughter told us she was fired along with at least nine other child workers at Monde Apparels.

A U.S. non-profit group, the Institute for Global Labor and Human Rights, has stepped in to help the girls financially. They hope many of them will return to school.

We spoke to Asics, Walmart and Wrangler for a response and all of them have now stopped production at Monde Apparels. Walmart didn't know their products were being made at Monde. They suspended their supplier involved and are still investigating what went wrong.

Asics told us the products we saw were counterfeit, but after our report aired, they discovered that one of their suppliers was, in fact, using Monde Apparels.

And Wrangler relied on WRAP, a U.S. standards organization to inspect Monde Apparels for safety. After our report, WRAP went back for another check and eventually stripped Monde Apparels of its safety certificate.