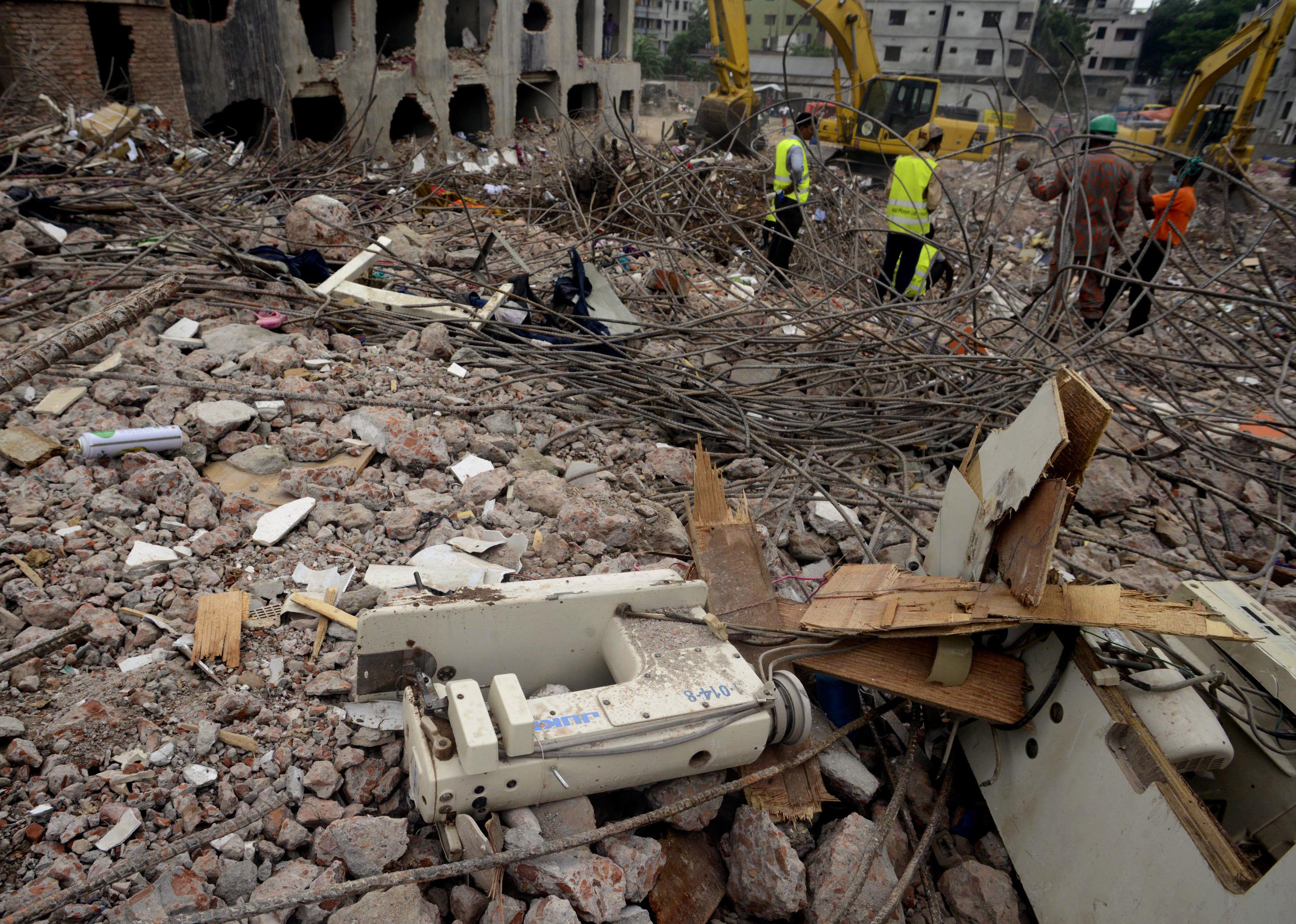 DHAKA, Bangladesh Bangladeshi garment factories are routinely built without consulting engineers. Many are located in commercial or residential buildings not designed to withstand the stress of heavy manufacturing. Some add illegal extra floors atop support columns too weak to hold them, according to a survey of scores of factories by an engineering university that was shown to The Associated Press.

A separate inspection, by the garment industry, of 200 risky factories found that 10 percent of them were so dangerous that they were ordered to shut. The textiles minister said a third inspection, conducted by the government, could show that as many as 300 factories were unsafe.

Taken together, the findings offer the first broad look at just how unsafe the working conditions are for the garment workers who produce clothing for major western brands. And it's more bad news for the $20 billion industry that has been struggling to regain the confidence of Western retailers and consumers following a November fire at the Tazreen Fashions Ltd. factory that killed 112 people and the April collapse of the Rana Plaza building that killed 1,129 people in the worst garment industry tragedy. But the proliferation of inspections could signal the industry is finally taking its workers' safety seriously.

Rana Plaza was "a wakeup call for everybody" to ensure their buildings were structurally sound, said Shahidullah Azim, vice president of the Bangladesh Garment Manufacturers and Exporters Association.

"Earlier it was not in our minds. We never, ever thought of this," he said.

To get a candid view of conditions in Bangladesh's garment factories, CBS News correspondent Holly Williams and her crew posed as garment buyers in Dhaka, telling factory managers they wanted to source clothes as cheaply as possible. Her series of exclusive reports showed dozens of factory workers who appeared to be well below the age of 18, and conditions which posed a significant danger to the staff.

In one four-storey facility, CBS News found hardly any fire extinguishers -- but there were signs on walls marking where they should have been. In another, exporting denim clothes to Europe, Williams saw young workers giving jeans a fashionable "distressed" look by spraying them with potassium permanganate -- a toxic substance that can cause damage to the nervous system. Some of the young workers were wearing no protective clothing.

Nor was the Rana Plaza the first factory building to collapse in Bangladesh. In 2005, the Spectrum sweater factory crumbled on top of workers, killing 64. That building was also found to have illegal additions.

After the Rana collapse, the government and the garment manufacturers asked the Bangladesh University of Engineering and Technology to begin evaluating the buildings. The university formed 15 teams of two engineers each — a structural expert and a foundation expert — to conduct initial inspections, examining a building's support columns, frame, foundation and the soil it was built on, said Mujibur Rahman, head of the university's department of civil engineering.

AP was shown initial results of some of the inspections of about 200 buildings — many of them garment factories — on condition the factories not be identified. The owners volunteered their buildings for inspection — even paying for the surveys — a decision that suggests they are among the more safety conscious in the industry. The remainder of the country's 4,000 garment factories could be worse, said Rahman.

While initial inspections showed that many of the factories appeared safe, some had problems so serious that engineers recommended they be immediately shut down. Others were told to seal off the illegal floors at the tops of their buildings and gingerly remove the heavy equipment stored there.

`'There were buildings that we found that were really critical and we asked them to immediately vacate those buildings," Rahman said.

The engineers found that huge numbers of the factories were housed in commercial or residential buildings not designed to withstand the vibrations and heavy loads of industrial use, Rahman said. Machinery vibrations were blamed as one of the causes along with additional illegal floors as the cause of the Rana collapse.

Most of the examined buildings did not have structural tests dating back to their construction, and it was `'very rare" that an engineer supervised construction, Rahman said.

They found a building approved for only six stories that had been expanded to 10. Support columns that were supposed to have five steel bars inside them had only two. Other columns were too small to support the structures. Some of the buildings had structural cracks that threatened their integrity.

In one report, the engineers found structural cracks on two columns and a heavy power generator located on the roof, where its vibrations could threaten the building's integrity. They recommended sealing all the floors above the ground floor pending a more thorough assessment. Rahman said he told the owners it would be safer just to demolish the building and start over.

A five-story factory had 30-centimeter by 12-inch by-12 inch structural columns that did not appear strong enough to handle the load. The engineers called for sealing the top floor until the building could be strengthened.

Another factory building had seven stories instead of the approved five and was meant for residential use. Its 10-inch by 10-inch columns were too small and the foundation was not wide enough to anchor the building in the red Dhaka clay. The engineers recommended closing the top two stories.

In other cases, the engineers called for the demolition of the illegal top floor of a seven-story building and the closure of several other buildings with structural cracks.

Rahman said some owners begged him to change the recommendations, saying they had three months of back orders to fill and then could address the problems. He refused.

Other owners appeared to think twice about the inspections.

The engineers were initially overwhelmed with requests to examine 400 buildings. But after their work began, some owners stopped answering their phones and engineers were unable to visit half of them, Rahman said.

It was not clear whether all the recommendations were being followed, but there were signs that some risky buildings were being forced into compliance.

Not far from the swampy pit where Rana Plaza once stood in the Dhaka suburb of Savar, a factory was dismantling — on government orders — two illegal floors it had been adding.

Industry and government officials said they were taking the results seriously and have announced a steady stream of factory closures in recent weeks.

"We are very much taking care of this thing, because we know that for one or two buildings, we cannot destroy all the industry," said Azim from the garment manufacturers' group.

The group set up its own engineering team and inspected 200 suspect factories in recent weeks, he said. They found violations so worrisome they shut 20 of them, he said.

Some will be moved to other buildings, others will be strengthened and some will be allowed to reopen after heavy equipment is removed from upper floors, he said. It was not clear if those 20 factories overlapped with those inspected by the university.

The garment association also established rules forcing factories to submit structural plans and soil test reports or risk losing their membership in the organization — and their export licenses, he said.

Textiles Minister Abdul Latif Siddique said the government was conducting its own inspections and expects to close factories as well.

`'I think 200 to 300 factories will be vulnerable, and I think we will identify those buildings very quickly," he said.

In the wake of the Rana Plaza disaster, the country was under extreme pressure from Western brands to improve safety, he said. But he also appealed to those companies to pay higher rates to cover the upgrades.

`'To provide security, better wages and compliance is not cheap," he said.

Swedish retailer H&M, PVH, the parent company of Calvin Klein, and Inditex, which owns Zara, are among companies that signed an agreement to help finance safety improvements in Bangladesh factories. Wal-Mart and the Gap have not.

Experts said the recent disasters were a product of the explosive growth of garment manufacturing here from a cottage industry into a behemoth that employs 4 million people. It began in the 1980s with small factories in residential buildings with no special fire exits, the workers sewing and cutting on the lower floors while the owner lived upstairs. When the business grew, the owner moved out and the factory expanded into the whole building.

Some factories later moved into commercial space. The most successful eventually constructed their own buildings, but even that was unregulated until Bangladesh established its first statutory building code in 2006.

Mubasshar Hussain, president of the Institute of Architects, Bangladesh, said 50 percent of the factories likely have problems, but all of them can be addressed within a year with a coordinated campaign to retrofit those buildings.

But Hussain worried that the burst of activity following the Rana Plaza collapse could dissipate. He pointed to a long-forgotten 2005 garment association report recommending close structural monitoring of factories in the wake of the collapse of the Spectrum sweater factory that killed 64 workers.

Siddique, the textiles minister, said the new disaster was too horrifying to be ignored.

"We are serious now, hopefully it will be better," he said.