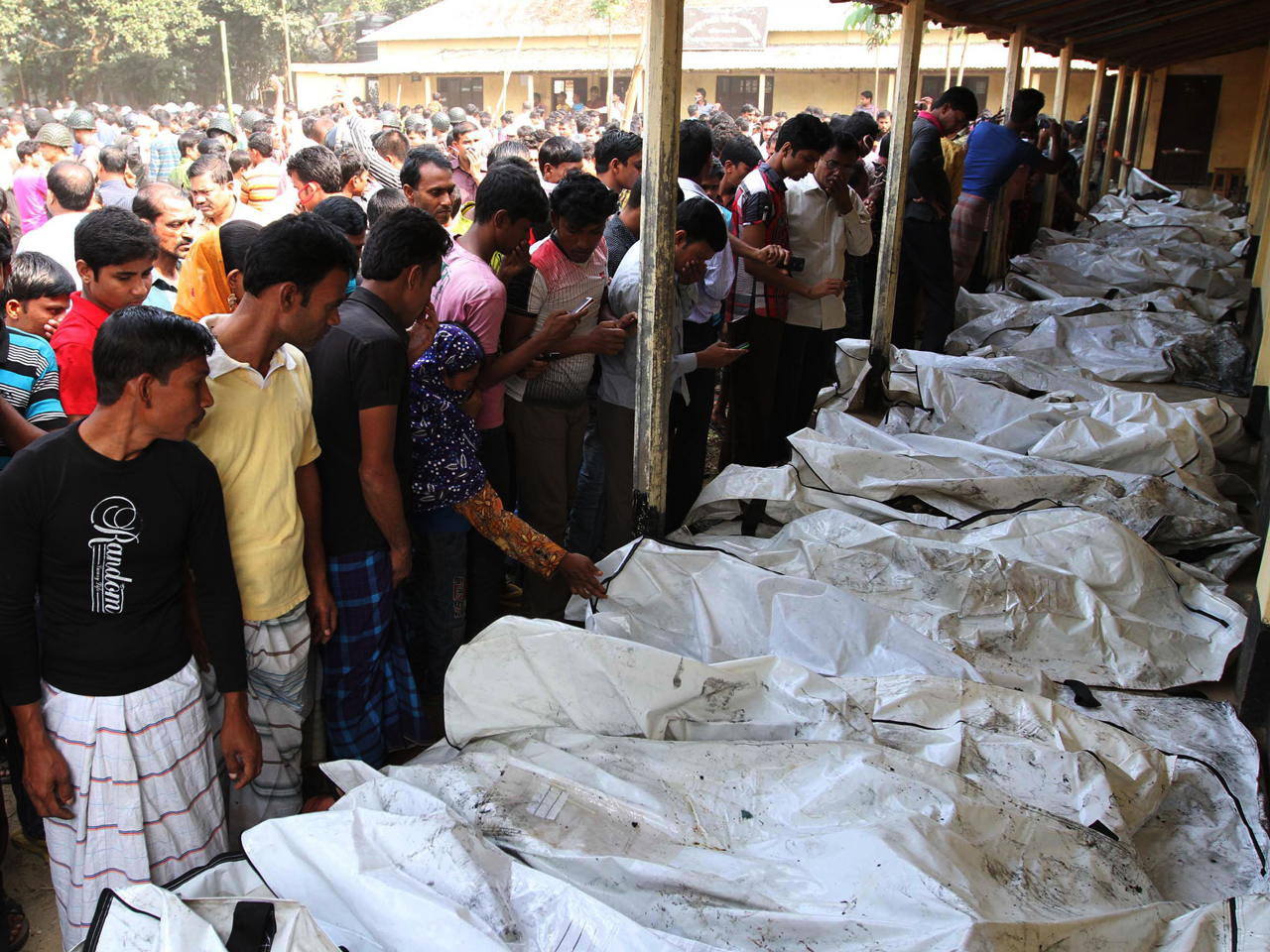 DHAKA, Bangladesh At least 112 people were killed in a fire that raced through a multi-story garment factory just outside of Bangladesh's capital, Dhaka, an official said Sunday.

The blaze broke out late Saturday at the eight-story factory operated by Tazreen Fashions Ltd., a subsidiary of the Tuba Group, which supplies Walmart and other major retailers in the U.S. and Europe.

By Sunday morning, firefighters had recovered 100 bodies, fire department Operations Director Maj. Mohammad Mahbub told The Associated Press. He said another 12 people who had suffered injuries after jumping from the building to escape the fire later died at hospitals. The death toll could rise as the search for victims was continuing, he said.

Local media reported that up to 124 people were killed in the fire. The cause of the blaze was not immediately clear, and authorities have ordered an investigation.

Army soldiers and paramilitary border guards were deployed to help police keep the situation under control as thousands of onlookers and anxious relatives of the factory workers gathered at the scene, Mahbub said. He would not say how many people were still missing.

Tazreen was given a "high risk" safety rating after May 16, 2011, audit conducted by an ethical sourcing assessor for Wal-Mart, according to a document posted on the Tuba Group's website. It did not specify the conditions or violations that led to the rating.

A spokesman for Wal-Mart said online documents indicating that the factory received an orange or "high risk" assessment after the May 2011 inspection and a yellow or "medium risk" report after an inspection in August 2011 appeared to pertain to the factory where the fire occurred.

The August 2011 letter said Wal-Mart would conduct another inspection within one year. Spokesman Kevin Gardner said it was not clear if that inspection had been conducted, or if the factory was still making products for Wal-Mart.

If a factory is rated "orange" three times in a two-year period, Wal-Mart won't place any orders for one year. The May 2011 report was the first orange rating for the factory.

There was no indication whether the violations had been fixed since the May inspection. Neither Tazreen's owner nor Tuba Group officials could be reached for comment.

The Tuba Group is a major Bangladeshi garment exporter whose clients include Walmart, Carrefour and IKEA, according to its website. Its factories export garments to the U.S., Germany, France, Italy and The Netherlands, among other countries. The Tazreen factory, opened in 2009 and employing about 1,700 people, makes polo shirts, fleece jackets and T-shirts.

Bangladesh has some 4,000 garment factories, many without proper safety measures. The country annually earns about $20 billion from exports of garment products, mainly to the United States and Europe.

In its 2012 Global Responsibility report, Walmart said that "fire safety continues to be a key focus for brands and retailers sourcing from Bangladesh." Walmart said it ceased working with 49 factories in Bangladesh in 2011 due to fire safety issues, and was working with its supplier factories to phase out production from buildings deemed high risk.

At the factory scene, relatives of the workers were frantically looking for their loved ones. Sabina Yasmine said she saw the body of her daughter-in-law, who died in the fire, but had no trace of her son, who also worked at the factory.

"Oh, Allah, where's my soul? Where's my son?" wailed Yasmine, who works at another factory in the area. "I want the factory owner to be hanged. For him, many have died, many have gone."

Mahbub said firefighters recovered 69 bodies from the second floor of the factory alone. He said most of the victims had been trapped inside the factory, located just outside of Dhaka, with no emergency exits leading outside the building.

Many workers who had taken shelter on the roof of the factory were rescued, but firefighters were unable to save those who were trapped inside, Mahbub said.

He said the fire broke out on the ground floor, which was used as a warehouse, and spread quickly to the upper floors.

"The factory had three staircases, and all of them were down through the ground floor," Mahbub said. "So the workers could not come out when the fire engulfed the building."

"Had there been at least one emergency exit through outside the factory, the casualties would have been much lower," he said.

Many of the victims were burned beyond recognition. The recovered bodies were kept in rows on the premise of a nearby school.

Meanwhile, many of the bodies were handed over to families but at least 60 bodies remained unidentified till late Sunday, said police official Moshiuddoula, who uses one name. The unclaimed bodies were later taken to Dhaka Medical College where the corpses will be kept until Monday morning for identification.

Otherwise, the bodies will be handed over to a charity organization, Anjuman-e-Mufidul Islam, for burial, said local chief government administrator Sheikh Yusuf Harun. The charity group is a voluntary organization which buries unclaimed bodies.

Prime Minister Sheikh Hasina expressed shock at the loss of so many lives in the blaze and asked authorities to conduct thorough search-and-rescue operations.

The Bangladesh Garment Manufacturers and Exporters Association said it would stand by the victims' families.

Separately, a flyover under construction fell onto a busy market, leaving at least 14 people dead including three construction workers in southeastern city of Chittagong, an official said Sunday.

Local fire official Abdul Mannan said the concrete structure collapsed on Saturday night, and authorities recovered the bodies by Sunday morning from under the debris in the second-largest city after Dhaka.