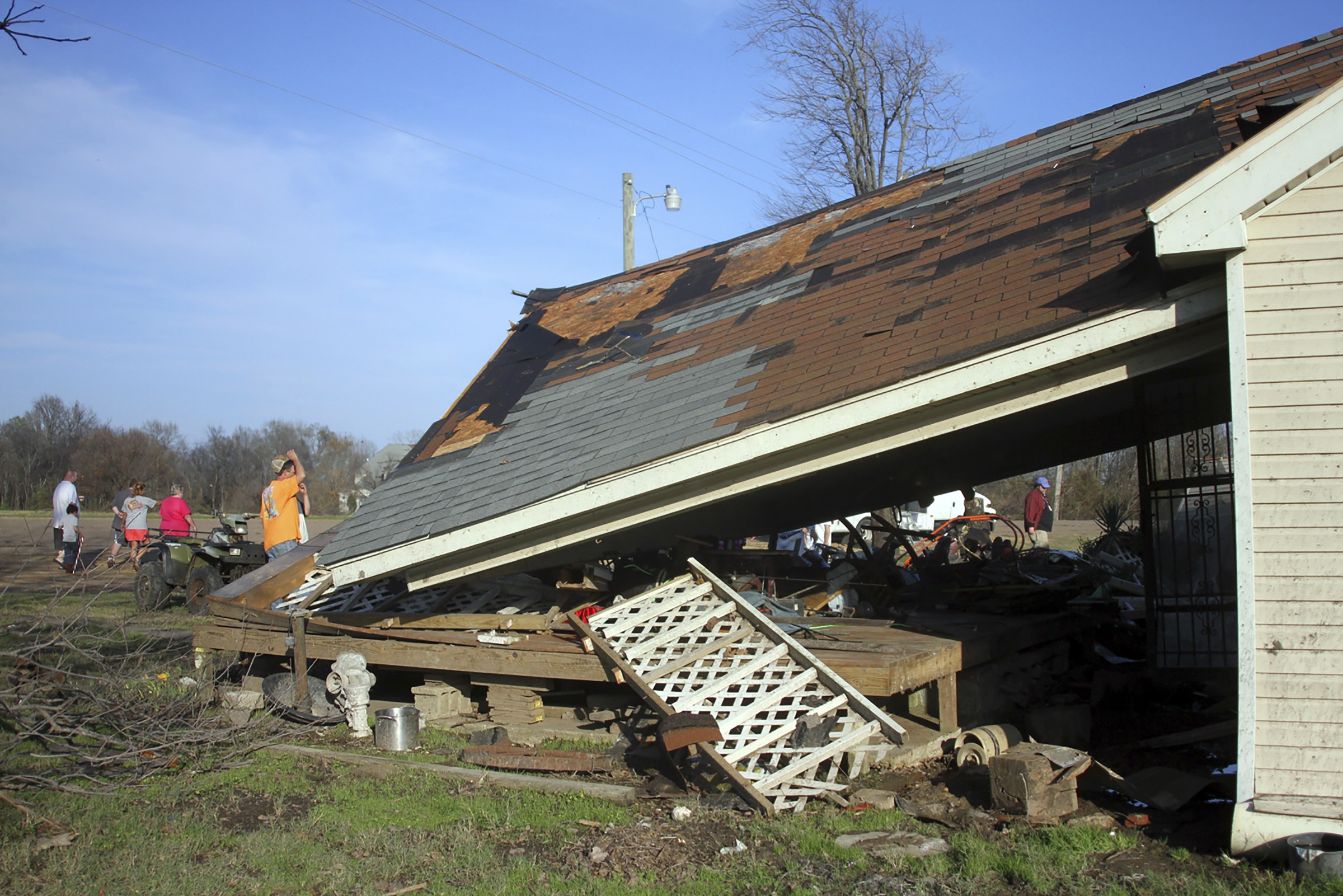 FALKNER, Miss. -- Barbara Perkins and her husband were hunkered down inside a closet when violent winds peeled the roof off their Mississippi home. The storm sucked the central air conditioning unit beside the couple straight up from the floor and into the howling sky.

As the couple surveyed the damage Thursday, broken glass and mud covered most of their home's interior. Many of their belongings had been thrown hundreds of feet away into the woods. A visiting insurance agent told them the house was a total loss.

Newly homeless, Perkins said she was happy just to be alive - especially after learning two of her neighbors had died in the storm.

"You kind of stop and realize what Christmas is all about," Perkins said.

The unseasonably violent weather that spawned deadly tornadoes Wednesday in the Southeast forced families to spend Christmas Eve taking stock of their losses. At least 14 people were confirmed dead - seven of them in Mississippi, including a 7-year-old boy who perished while riding in a car that was swept up and tossed by storm winds. Dozens more people were hurt.

Family members identified the boy as Nikolas Pumroy, reports CBS Memphis, Tennessee affiliate WREG-TV. "He wanted to be an astronaut. Let me tell you, he would have been an astronaut, too," said the boy's grandfather, Johnny Fortenberry.

Mississippi governor Phil Bryant said he would ask the president to declare a disaster area. "It is difficult, particularly this time of year, to see such damage and know the heartbreaks that go along with that damage, that families have lost loved ones," he said.

Six people were killed in Tennessee and one in Arkansas. Dozens of homes were damaged or destroyed.

States of emergency were declared in Mississippi, Georgia and Tennessee. The storm system unleashed at least 34 tornadoes in 8 states.

In Linden, Tennessee, Tony Goodwin ducked into a storm shelter with seven others as the storm passed. He emerged to find his house had been knocked off its foundation and down the hill.

He managed to climb inside and fetch some Christmas gifts that had been under his tree. Goodwin's neighbors weren't so fortunate. Two people in one home were killed.

"It makes you thankful to be alive with your family," he said.

Dozens of people were injured in the storms, some seriously, said Greg Flynn, spokesman for the Mississippi Emergency Management Agency.

Search teams combed damaged homes and businesses for people still missing, a hunt made complicated because so many had left for the holidays.

"Until they know for sure where those folks are, they're going to keep looking, because we've had in some cases houses leveled, and they're just not there anymore," Flynn said.

In Benton County, Mississippi, relatives helped Daisy and Charles Johnson clean up after the storm flattened their house. They carried some of the couple's belongings past a Santa Claus figure on a table.

Daisy Johnson, 68, said she and her husband rushed along with other relatives to their storm shelter across the street after they heard a tornado was headed their way.

"We looked straight west of us, and there it was. It was yellow and it was roaring, lightning just continually, and it was making a terrible noise," she said. "I never want to hear that again for as long as I live."

Mona Ables, 43, was driving home when the storm hit. She abandoned her car, ran to a house and banged on a window, seeking shelter.

The startled man inside couldn't open the door, which appeared to be blocked, Ables said. She huddled next to the house as another stranger pulled up, also looking for shelter.

"He and I just huddled together and saw trees fly past us, and a shipping container flip over," Ables said. "And as the debris started hitting us, he just covered me, and within a minute it was all over and there was destruction all around us and we were fine."

Glenda Hunt, 69, was cooking chicken and making dressing Wednesday night at her Benton County home, where Christmas Eve lunch is a family tradition, when her daughter called to warn her of the approaching storm.

Hunt and her husband ducked into their storm shelter and wrestled the door shut against the wind's powerful suction. She started praying when she heard sheet metal hitting trees.

On Thursday, heavy farm equipment and corn were strewn across the couple's property. Their house sustained heavy structural damage but was still standing.

"We're OK and that's all that matters," Hunt said. "But the Lord did save my furniture."