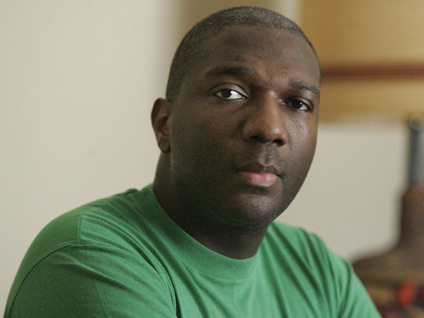 Alvin Greene -- an unknown, 32-year-old, unemployed veteran facing pending felony charges -- shocked the political world when he won Tuesday's Democratic primary. His victory raised questions about how an unknown, unemployed candidate managed to soundly defeat a relatively well-funded opponent, or even pay the $10,400 filing fee to enter the race.

House Democratic whip James Clyburn of South Carolina said Greene is probably a "plant", either from the Republican party or some other group, and that the U.S. Attorney's office should investigate the matter.

But Sen. Robert Menendez (N.J.), chair of the DSCC, said today that it is up to the South Carolina Democratic Party to determine whether there was any interference in the primary from the GOP or anyone else.

"Right now the DSCC is not engaged there," Menendez said, evading questions from reporters about whether the DSCC supports the state party's request for Greene to drop out of the race. So far Greene has said he is staying in the race and has nothing to hide.

The DSCC did not bother investing in the primary since the incumbent, Republican Sen. Jim DeMint, is expected to hold onto his seat.

While Greene's victory was a surprise, Menendez said there have been plenty of surprises on the Republican side so far that improve the Democrats' chances in November -- such as Tea Party favorite Sharron Angle's victory in the GOP Senate primary in Nevada.

Republicans are "in the position now of having to support candidates they didn't want," he said.

In Florida, Menendez said the DSCC is committed to supporting Rep. Kendrick Meek, even though a new Quinnipiac poll shows him in a statistical dead heat with his wealthy primary challenger Jeff Greene among Democratic primary voters.

"We believe [Meek] can win the general election," Menendez said, adding that Meek does not have very much name recognition yet.

Additionally, Menendez said he still expects the support of labor unions this year, even though the party's relationship with the unions has been strained over Arkansas Sen. Blanche Lincoln's campaign.

"I fully expect them to be engaged with us" this election season, he said.