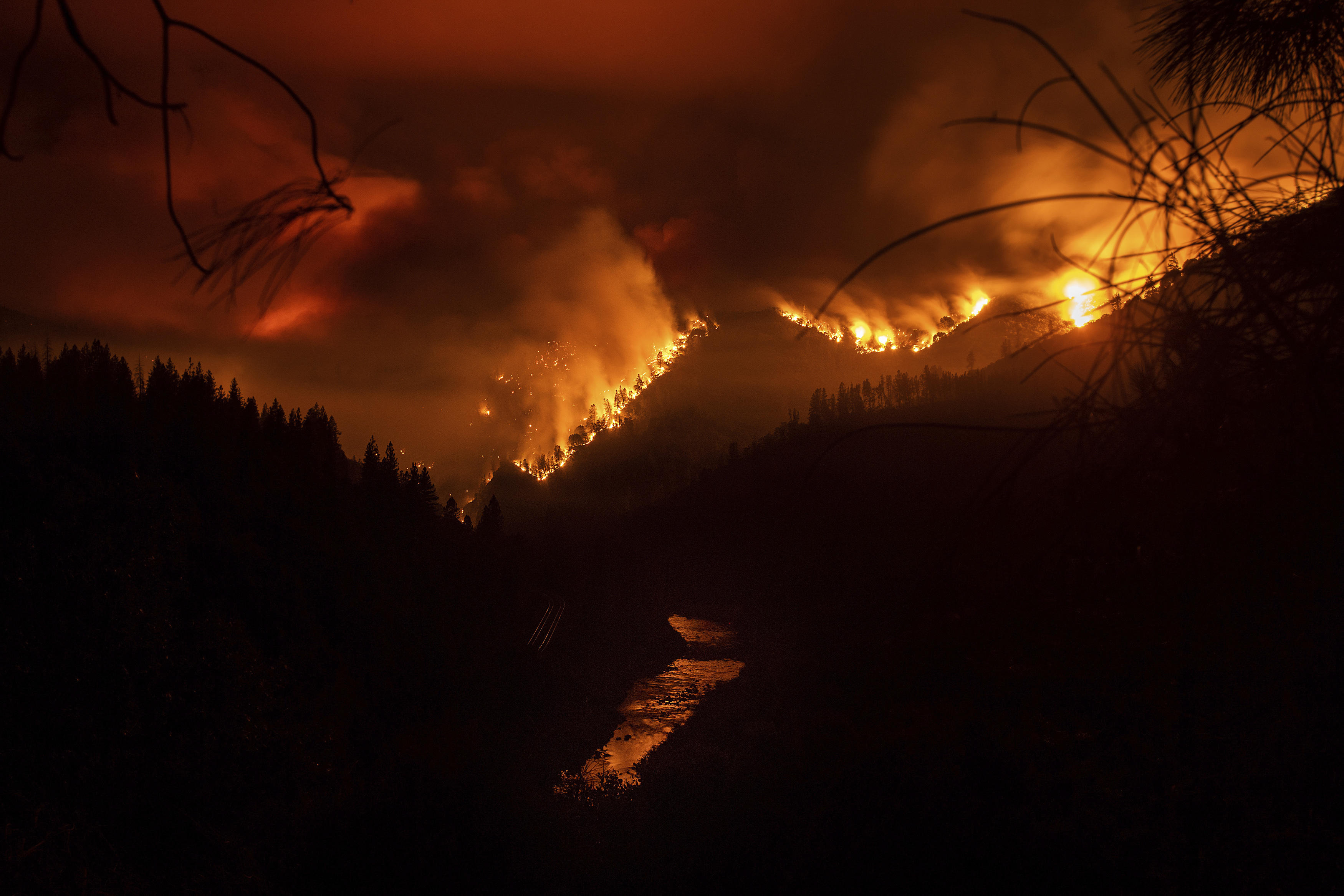 REDDING, Calif. -- An explosive wildfire has nearly tripled in size overnight in Northern California and prompted closure of a major freeway, just weeks after a nearby blaze that left neighborhoods in ruins and killed eight people, officials said Thursday. The fire that erupted Wednesday afternoon and devoured timber and brush on both sides of Interstate 5 near the Oregon state line had expanded to 23 square miles Thursday, prompting mandatory evacuations, the U.S. Forest Service said in a statement. That's up from 8 square miles burning Wednesday.

Authorities said Thursday night that 45 miles of I-5 will remain closed until at least Friday morning. The highway runs north from the Mexico border through California, Oregon and Washington state to the border with Canada.

The California Highway Patrol said the closure in Shasta County has significantly snarled traffic. The agency warns motorists and truckers to avoid the region if possible.

CHP officer Jason Morton said the only alternate route around the closure is taking motorists up to eight hours to navigate. Morton said the 140-mile detour on Highway 299 to Route 89 has been bumper-to-bumper the entire route.

He said the winding, mountain roads funnel to one lane each way at many points, and traffic often slows to 1 mph.

Morton said officials will reassess the safety of reopening Interstate 5 on Friday morning.

The scattered homes and cabins in and around Shasta-Trinity National Forest were under evacuation orders, from the community of Lakehead north to the Siskiyou County line, said Chris Losi, a spokesman for the forest.

Officials said the blaze was human-caused, but they did not indicate whether it was arson or an accident.

Truckers abandoned their vehicles Wednesday as flames roared up hillsides. In a video, a passenger in a vehicle screams: "Oh my God, I want to go!" as trees burst into flames and sheets of fire roiled on the side of the roadway.

CBS Sacramento reports some of the rigs were "barely recognizable."

U.S. Forest Service workers helped the driver of one flaming truck to safety and other truckers, firefighters and others aided other drivers, he said.

"There's vehicles scattered all over," Brandon Vaccaro with the California Department of Forestry and Fire Protection told the Redding Record Searchlight. "Whatever occurred here was probably pretty ugly for a while."

About 45 miles of the I-5 were closed in both directions, said Chris Losi, a spokesman for the Shasta-Trinity National Forest.

A reporter for CBS affiliate KHSL-TV of Chico, California, captured dramatic time-lapse video and posted it to Facebook:

The city of Dunsmuir, with about 1,500 people, was about 15 miles (24 kilometers) from the fire. Residents were issued an evacuation warning, urging them to be prepared to leave if the fire threatened.

A nearby fire in the Redding area burned some 1,100 homes and killed eight people last month. It was only fully contained last week.

California's insurance commissioner said Thursday that victims of that fire and one in the Mendocino area - the two largest blazes in the state so far this year - have filed more than 10,000 claims so far totaling $845 million.

The two fires destroyed or damaged a combined 8,800 homes and 329 businesses.

"The worst may be yet to come," Commissioner David Jones warned at a San Francisco news conference, noting that California wildfires are typically more destructive after Sept. 1.

California's firefighting agency is about to exceed its budget and needs $234 million more, Cal Fire director Ken Pimlott said in a letter to lawmakers Thursday.

The agency spent $432 million through the end of August and had only about $11 million left, Pimlott wrote. Cal Fire would use some of the money to add firefighters and helicopters, he said.

California's legislature budgets for firefighting based on the historical average costs. Cal Fire has requested extra money in seven of the past 10 years, but never this early, according to the Department of Finance.