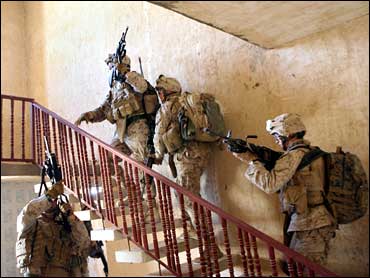 It's been a particularly deadly week for U.S. forces in Iraq, with the military announcing three more deaths on Saturday.

A bomb killed a U.S. soldier on a foot patrol Saturday south of Baghdad, the military said, after a particularly deadly week for U.S. forces in Iraq.

The soldier with the Multi-National Division in Baghdad died at about 7:20 a.m. Saturday due to injuries "suffered from a bomb explosion while on a dismounted patrol south of Baghdad," the military said.

The military also announced the deaths of two other soldiers from the same division Friday.

One soldier was killed in a roadside bomb about 2:45 a.m. Friday in the capital, according to a statement. The attack occurred hours before clashes broke out on a volatile street near the heavily guarded Green Zone, prompting the Iraqi government to impose a curfew.

Another soldier from the same division died in a "non-combat incident" at about 5 p.m. Friday, the military said, adding the incident was under investigation.

The names of the soldiers were not released pending notification of next of kin.

Fifteen U.S. servicemembers have died or been found dead in Iraq this week.

At least 2,520 members of the U.S. military have died since the Iraq war started in March 2003, according to an Associated Press count.