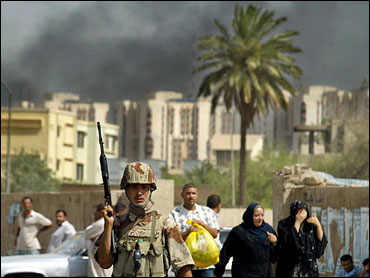 The Iraqi government declared a state of emergency and imposed a curfew Friday after insurgents set up roadblocks in central Baghdad and fired on U.S. and Iraqi troops outside the heavily fortified Green Zone.

With just two hours notice, Prime Minister Nouri al-Maliki ordered everyone off the streets of the capital from 2 p.m. until 5 p.m.

Iraqi and U.S. military forces clashed throughout the morning with attackers carrying rocket-propelled grenades, hand grenades and rifles in busy Haifa Street, which runs into the Green Zone, site of the U.S. and British embassies and the Iraqi government.

The area was sealed and Iraqi and U.S. forces conducted house-to-house searches.

The fighting was unusual in its scope and intensity. There have, however, routinely been clashes along Haifa Street, making it so dangerous that a sign at one Green Zone exit checkpoint warns drivers against using it.

Two U.S. soldiers were killed when a roadside bomb struck their vehicle southeast of the capital, the U.S. military said.

The military also said two U.S. Marines died in combat in volatile Anbar province in separate attacks on Wednesday and Thursday, and a soldier died elsewhere in a non-combat incident on Wednesday.

At least 2,517 members of the U.S. military have died since the Iraq war started in March 2003, according to an Associated Press count.