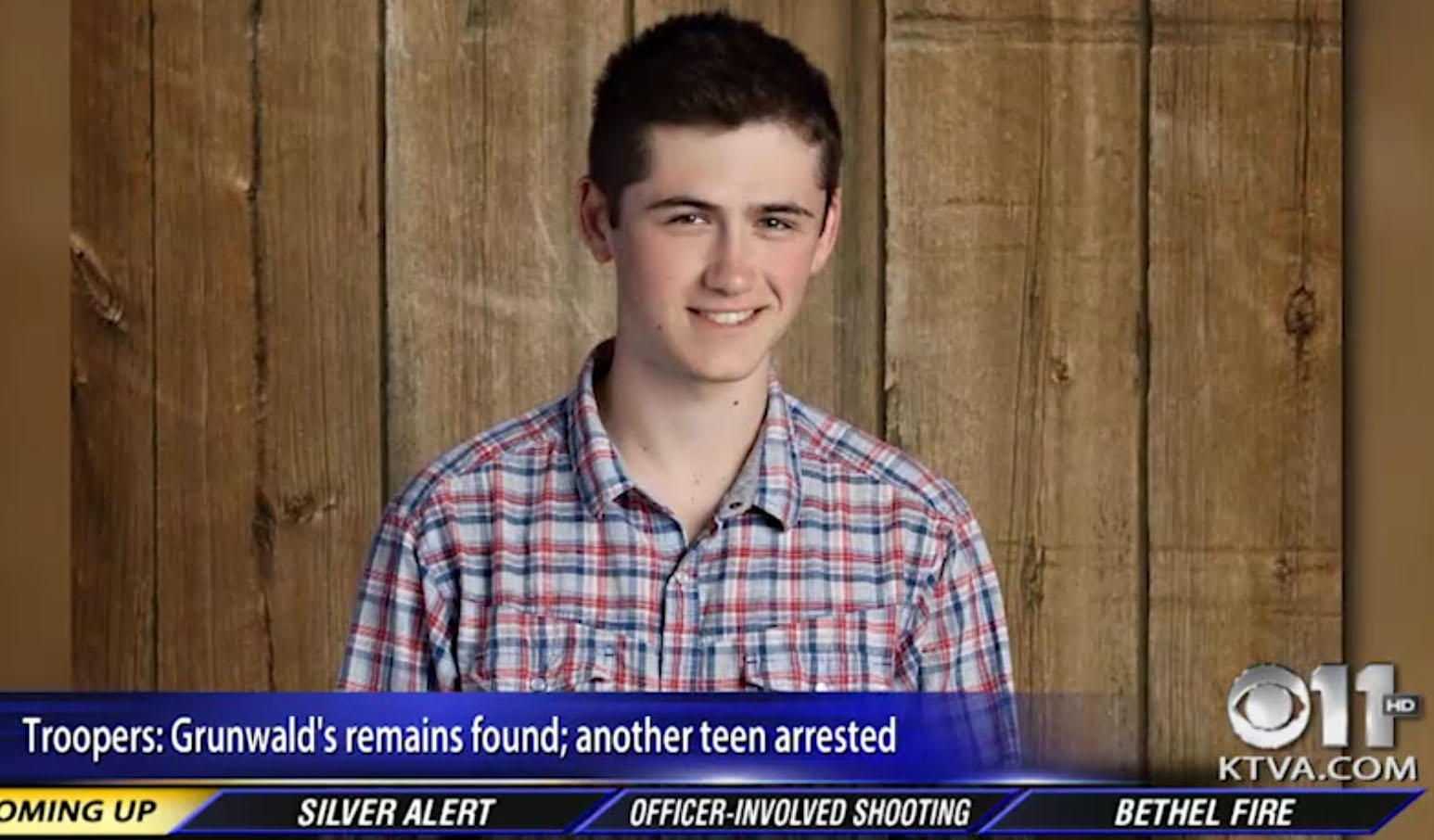 ANCHORAGE, Alaska -- A missing teenager from Palmer, Alaska, was pistol-whipped by an acquaintance, driven to a remote location, walked 200 feet into the woods and fatally shot once in the head, a suspect told Alaska State Troopers in an account outlined in newly-released court documents.

Erick Almandinger, 16, is charged as an adult with first-degree murder and kidnapping in the death of David Grunwald, 16, whose body was found Friday by troopers acting on a tip by another teen. Almandinger, however, denied pulling the trigger and said another teen shot Grunwald, who had begged for his life, reports CBS affiliate KTVA.

Grunwald, a student at Mat-Su Career and Technical High School, failed to return home after dropping off his girlfriend Nov. 13. His father called troopers just before midnight that night and said the boy, driving a 22-year-old Ford Bronco, was three hours overdue. The father described that as “totally unlike” the teen, KTVA reports.

Grunwald’s father reported his son may have met Almandinger to give him a ride to Anchorage.

A passer-by on Nov. 14 found David Grunwald’s burned Bronco west of Wasilla. There was no sign of the driver.

Troopers could not immediately find Almandinger, but they caught up with him Nov. 16. He denied seeing Grunwald the night he disappeared and said he had taken a cab to Anchorage.

Troopers determined he was lying, said Sgt. Tony Wegrzyn in the criminal complaint. Cellular data from Almandinger’s mobile tablet indicated it had been near Grunwald’s SUV the night it burned. Troopers also found a cab driver who had picked up Almandinger and another teen near the SUV.

Wegrzyn on Nov. 29 obtained a search warrant for Almandinger’s home and found a camper trailer with the “overwhelming odor of bleach.” Investigators found blood inside on the floor, walls and toilet.

Wegrzyn later that day interviewed “D.J.” The youth consulted with an attorney and provided directions to Grunwald’s body. The remains were found 200 feet off Knik River Road southeast of Palmer. An investigator found one shell casing nearby.

Wegrzyn then interviewed Almandinger with his father and grandmother present. At first, Wegrzyn said, he again said he knew nothing of Grunwald’s death. When confronted, however, Almandinger said Grunwald had come to his house to drink and smoke pot in the camper. While doing so, he told the investigator, “D.J” texted him to bring a gun to the trailer. He said he handed a .40-caliber handgun to the other youth, who used it to bludgeon Grunwald.

“Almandinger admitted he stood by as this happened and did nothing to stop it,” the complaint says, according to KTVA.

In a second recounting of the incident, Wegrzyn said, Almandinger blamed the shooting on another 16-year-old, “A.B.”

Almandinger acknowledged burning the Bronco miles away, catching a cab ride home, cleaning the trailer and burning a rug from the trailer that was covered in blood.

The only motive Wegrzyn could detect from Almandinger, the investigator said, was that Grunwald “had smoked all of his weed.” Almandinger showed little remorse for his actions, Wegrzyn said, but cried when told his friends had talked to police.

Almandinger was arraigned Saturday. He remained jailed Monday at Mat-Su Pretrial Facility. Assistant public defender Windy Hannaman said she could not comment on an open case.