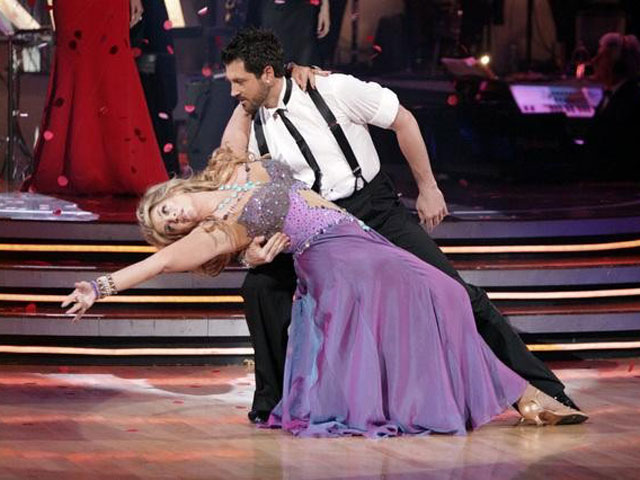 (CBS) Perhaps the only orchestra many of the "Dancing with the Stars" contestants had ever danced to was the Electric Light Orchestra. Even that might not have gone too well.

So last night, their attempts to match the rhythms of a classical orchestra were anticipated with some trepidation.

Here they were in order of performance:

Romeo claimed that he was a Beethoven listener. In his paso doble rehearsals, he was struggling to express aggression. So after a little basketball practice, he was ready. He kept his face straight and mean, just like Ron Artest on one of his better days. He also has the six-pack that every matador craves.

Judge Len Goodman felt he lacked a little finesse. Fellow judge Carrie Ann Inaba suggested he had "swagga." Indeed, he has so much swagga that after a competent performance he was brave enough to advertise his Twitter feed.

Kendra Wilkinson was seen earlier this week allegedly weeping after a particularly strenuous training session. She feared her lack of ladylikeness would, in this waltz, leave her "screwed." She found inspiration, however. "I'm so into the Mafia," she said in rehearsal. This allowed her to forget Austria and the Viennese Waltz and turn it into something Italian. Or New Jerseyan. She wanted to be the Godmother of the Viennese Waltz.

Unfortunately, some of her movements resembled Snooki's on a clubbing Friday night. There was little fluidity and much discomfort. Wilkinson claimed her imperfection was down to a mere four days of rehearsal, which was the sort of excuse Tony Soprano might have used with his shrink.

Sugar Ray Leonard was lucky to avoid elimination last week. Now he had to perform a little Nutcracker. His partner Anna Trebunskaya took him to ballet school, which was something football great Herschel Walker had used to perfect his moves from running back. Leonard seemed to believe that in order to deliver this Viennese Waltz, he should attempt to inject a little Gene Kelly. "Baryshnikov is not going to lose his sleep tonight," offered judge Bruno Tonioli. It was entertaining. So is a roller coaster.

Petra Nemcova was inordinately elegant last week. So Dmitri Chaplin, her professional partner, wanted technique and anger for the paso doble. He threatened to hit Nemcova during rehearsal. Just before the performance Nemcova began to giggle. Still, she reached deep into her model roots and managed to pout through all of her dance. She delivered some pleasingly aggressive arm movements and mean eyebrows. Moreover, she finished on the floor in her underwear. If only men voted in this thing. Perhaps this week they will.

"Karate Kid" actor Ralph Macchio has creepy fingers - at least, according to the judges. However, in this Viennese Waltz, Macchio managed to handle playing the romantic lead. The dance began with his partner, Karina Smiirnoff, playing dead. Macchio brought her to life with some intimacy, some twirling and some facial expressions that suggested he was about to lose his love or, at least, his lunch. Inaba described Macchio as "honest". If he's in this much romantic agony in real life, I wonder how he can ever get through "Dancing with the Stars."

Hines Ward has emerged as the early favorite. How, then, could a chunky, muscular, wide receiver not feel a little elation at the idea of an aggressive paso doble? He strutted. He stomped. He walked his routes just as they had been diagrammed. Ward, of all the amateurs, seems the least intimidated by any new dance. And the audience responds to his ability to control his body and offer a remarkable level of artistic grace. Carrie Ann Inaba was Carrie Ann In-amored in her judge's comments. The audience, however, was unimpressed with scores of a mere 8 from the other two judges. Ward claimed he had never listened to classical music. Last night, it listened to him.

Chelsea Kane also worried about being "screwed" in this new lyricless world. She need not have been concerned. Her Viennese Waltz (dancing to the theme from the "Harry Potter" films) was hauntingly beautiful. It was like watching Tim Burton and Helena Bonham Carter express their feelings for each other in an isolated mansion they had rented for the night.

Kane's partner, Mark Ballas, enjoys inventive choreography, for which he received dribblingly pathetic criticism from judge Len Goodman. Goodman came across as the crusty, wizened old scarecrow in the bar who wants to talk about the war. He accused Ballas of creating distraction (which the media managed this week by linking Ballas to ousted "Idol" contestant Pia Toscano. She contacted him, allegedly). Thankfully, the other two judges appreciated not merely the inventiveness, but the technical excellence of Kane's performance.

You might imagine that a wrestler would enjoy the arrogant kill of the paso doble. He did. But somehow Chris Jericho didn't manage to deliver quite the level of aggression that the dance required. He seemed more concerned with technical precision than offering enough physical posing. Perhaps being dressed in gold meant that Jericho couldn't quite muster sufficient nastiness from his past.

And then there was Kirstie Alley. Alley summed up her falling disaster of last week very pithily: "We came. We fell. We conquered." So nothing could go wrong this week. Nothing. Partner Maksim Chmerkovskiy showed no ill effects from America's most famous thigh injury, but then Alley injured her hip. And this was merely rehearsal.

So nothing more could go wrong, could it? It couldn't. Well, until Alley's shoe began coming off. She sat on the floor (she was supposed to be there) and tried to tie it up, while Chmerkovskiy waltzed around her. The show went on. It was, perhaps, the worst performance Alley has offered so far, but, true to her personality, she survived.

She also referred to herself and Chmerkovskiy as "the freak show." One can only hope the demons will somehow disappear, should she survive this week's voting.