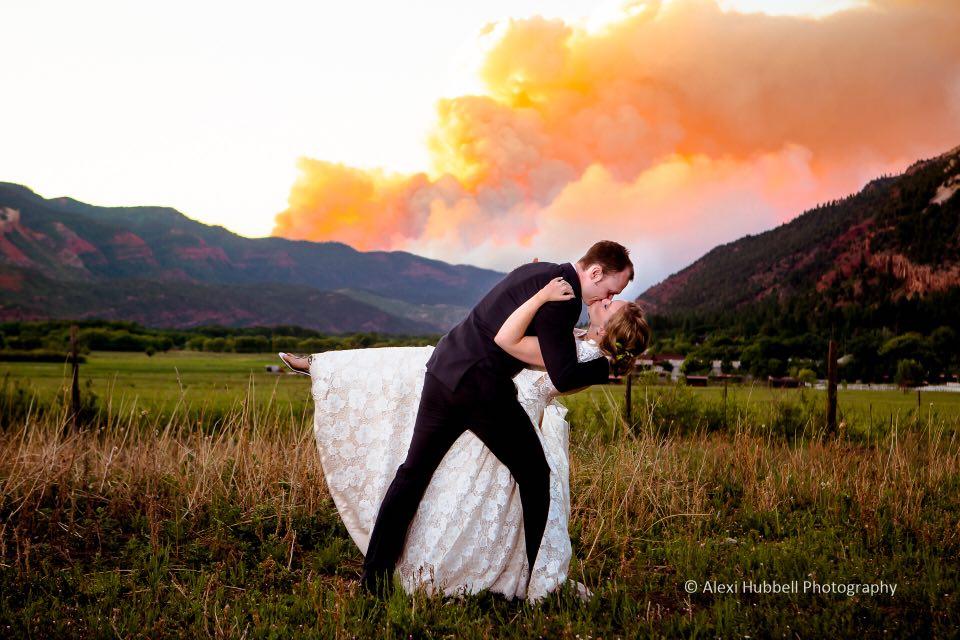 Sara McLaughlin and Michael Kramer were supposed to get married last weekend at Cascade Village, a wedding venue in Durango, Colorado. But mother nature had different plans.

A raging wildfire known as the 416 Fire has forced the evacuation of more than 2,000 homes in the area, CBS Denver reports. Over the weekend, the fire nearly doubled in size to 26 square miles due to hot and windy weather in very dry vegetation, authorities said.

The worsening conditions, however, did not prevent McLaughlin and Kramer from celebrating their wedding.

The couple quickly found a backup plan. At the last minute, they moved their wedding from their original venue, which was closed, and held it in a home instead. The wildfire was visible from the area, near route 250, but McLaughlin and Kramer made the most of it.

They took their wedding photos outside, with the blazing fire in the background sending plumes of bright orange smoke into the sky.

The unconventional wedding portraits captured nature's wrath -- and beauty. Their photographer, Alexi Hubbell, shot the groom dipping the bride, the couple kissing and holding hands against the backdrop of the flames.

The photos went viral online. The stunning images reflected the magnitude of the fire as well as the couple's determination to celebrate their wedding.

"I want to give a huge thank you to the firefighters on the ground trying to contain this thing!" Hubbell wrote in the caption of the photos. "I know the crews out there are working extremely hard to protect this valley and the homes in it, including the one we were at last night."

The photographer asked that anyone who shared the photo consider making a donation to the fire and rescue efforts in Durango and Silverton. Both areas are tourist destinations and the fires could inhibit the towns from making any money this summer, Hubbell wrote.

The wildfire comes amid a severe drought in the Four Corners area, where Colorado, Arizona, New Mexico and Utah meet.