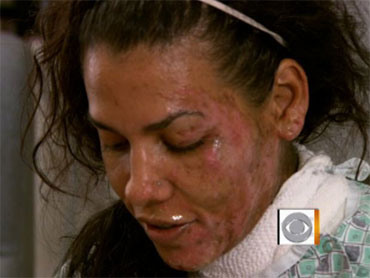 For the second time in a week, a woman has been attacked by an acid-throwing female.

And police and other experts say they suspect the latest assault may be been a case of someone imitating the first.

The victim, Derri Velarde, 41, a mother of five, says it came out of nowhere.

She says she was getting out of her car at home and, "There was a woman walking from the back side of my car. ... She had what I thought was a glass of water in her hand, and then she just stopped abruptly and looked at me and just threw it in my face."

Velarde was splashed with what she originally thought might be water. It turned out to be acid.

"It just instantly was like fire. It started burning intensely, instantly," she told CBS News from her hospital bed.

Velarde was left with severe burns on her face and neck, and along her arms.

The incident, notes CBS News Correspondent Betty Nguyen, was eerily similar to one that occurred Monday in Vancouver, Wash, in which 28-year-old Bethany Storro was also attacked as she left her car. Again it was a female stranger throwing acid.

"It was the most painful thing ever," Storro, her face wrapped with bandages, told a hospital news conference. "My heart stopped, I almost passed out."

"It's absolute hatred of the highest degree," says writer Victoria Schofield, who studies culture and the politics of South Asia, where acid attacks are far more common, and the culprits are usually men. "It is probably in the present day one of the most demeaning forms of punishment you can think of, to destroy someone's face."

And that's why police say it's rare for these kinds of assaults to be random acts. "This type of crime is usually personal in nature, one Mesa police officer says.

Velarde, who is going through a divorce and recently started a new relationship says she doesn't know who her attacker is, speculated that her attacker "wanted to make sure she disfigured me so that no-one would want me."

Paramedics and police say Velarde stopped the burns from getting worse by quickly getting into the shower and rinsing the acid off her body.

On "The Early Show," criminologist Casey Jordan told co-anchor Erica Hill, "The only connection (between the two attacks) is the idea that the Bethany Storro story was in the news so much that it could have actually been inspiration to somebody who already held a vendetta, who got the idea from watching television, if they were jealous, if they were thinking of getting back at somebody. Maybe the idea hatched in this woman's head that this would be the way to actually get retaliation against the woman in Arizona.

Like Schofield, Jordan points out that such assaults happen much more often in other parts of the world. "In international cultures," says Jordan, "it's usually a way of controlling women, especially women who have spurned advances. It's a way of men exerting control and putting women in their place by harming their beauty.

"But that same concept of harming someone's beauty can also be used by other women who are very jealous or upset, because they understand that, in America's culture, a woman's physical, facial beauty is really huge. … So, to get back at somebody, to teach her a lesson, one woman to another, it's usually linked to jealousy or retaliation, almost always over a man or a previous relationship."

Both victims are very pretty, and that likely played a role in both attacks, Jordan says, observing that, "Even though I do believe the attack in Washington was random, don't forget that the attacker there said, 'Hey, pretty girl.' She used the word 'pretty' to describe Bethany before splashing her with the acid. Even though we think, in Arizona, that the woman was targeted, and we don't know who the culprit is, the fact that she is such an attractive woman probably played a role in the choice of attack."

"It's easy to obtain. It's cheap. I mean, as they say, even the smallest child can strike a match. Well, anyone, male, female, can get a caustic substance at a hardware store and actually do incredible damage to somebody with very little effort."

Jordan had a word of caution for the media. "In the United States, even though we've had a number of acid attacks in the last few years, very few have made the news. There's a balance between giving enough media attention to this to show the problem it's becoming but also walking away and understanding that they are isolated incidents. You don't want to make it into a snowball factor where people get the idea."