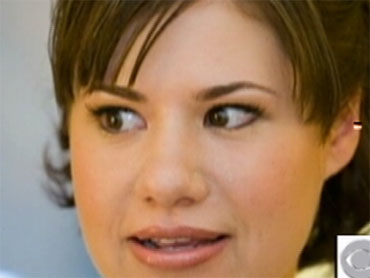 The victim of a vicious attack with acid is telling what happened for the first time.

On Monday, Bethany Storro, 28, was assaulted by a complete stranger.

Police are seeking the culprit.

During a hospital news conference, her parents at her side, her face wrapped in bandages, Storro recalled the violent, random attack that, says CBS News Correspondent Betty Nguyen, may have disfigured her for life.

"It was the most painful thing ever. My heart stopped, I almost passed out," Storro said.

Earlier this week, she was celebrating a new job, when she got out of her car in an upscale neighborhood in Vancouver, Wash.

Out of nowhere, a stranger appeared and, according to Storro's mother, Nancy Neuwelt, said, " 'Hey, pretty girl,' and she turned and said, 'Do you want a drink of this?' And my daughter said, 'No, I'm going to Starbucks. I'm alright.' And the woman threw this acid substance … in her face."

Storro stumbled to the ground as the skin on her face bubbled. She could literally hear it burning.

"It ripped through my clothes the instant it touched my shirt," she told reporters.

"She had," says witness Dwayne Stewart, "her face in her hands (and was) screaming, 'It burned, it burned, it burned." '
Storro described the suspect as an African-American in her mid-twenties. A police spokesperson told CBS News they haven't located anyone who saw the attack.

Storro says she'd like to ask her attacker, "Did you wake up and go, "I'm gonna carry some acid in a cup and throw it on the first person I see?" ' "

The woman who threw the acid ran away as a passerby called 911. Storro was rushed to the hospital, where she's being treated for severe burns on her face.

"The only area that's spared is the eyelids area, where she had apparently sunglasses on when this occurred," says Dr. Nick Eshragi, a burn surgeon.

Storro had purchased sunglasses just hours before the attack -- a decision her mother says saved her from permanently losing her sight.

"The miracle out of all this," says Neuwelt, "is that, … she (had just) decided to buy a pair of sunglasses. She never wears sunglasses, ever."

Storro, who has been almost completely deaf since childhood, said that, despite her ordeal, she's chosen to remain positive. "I have an amazing family and friends who love me, and I'm blessed," she remarked.

Doctors say she'll probably need more surgery, though it's still too soon to say just how much.