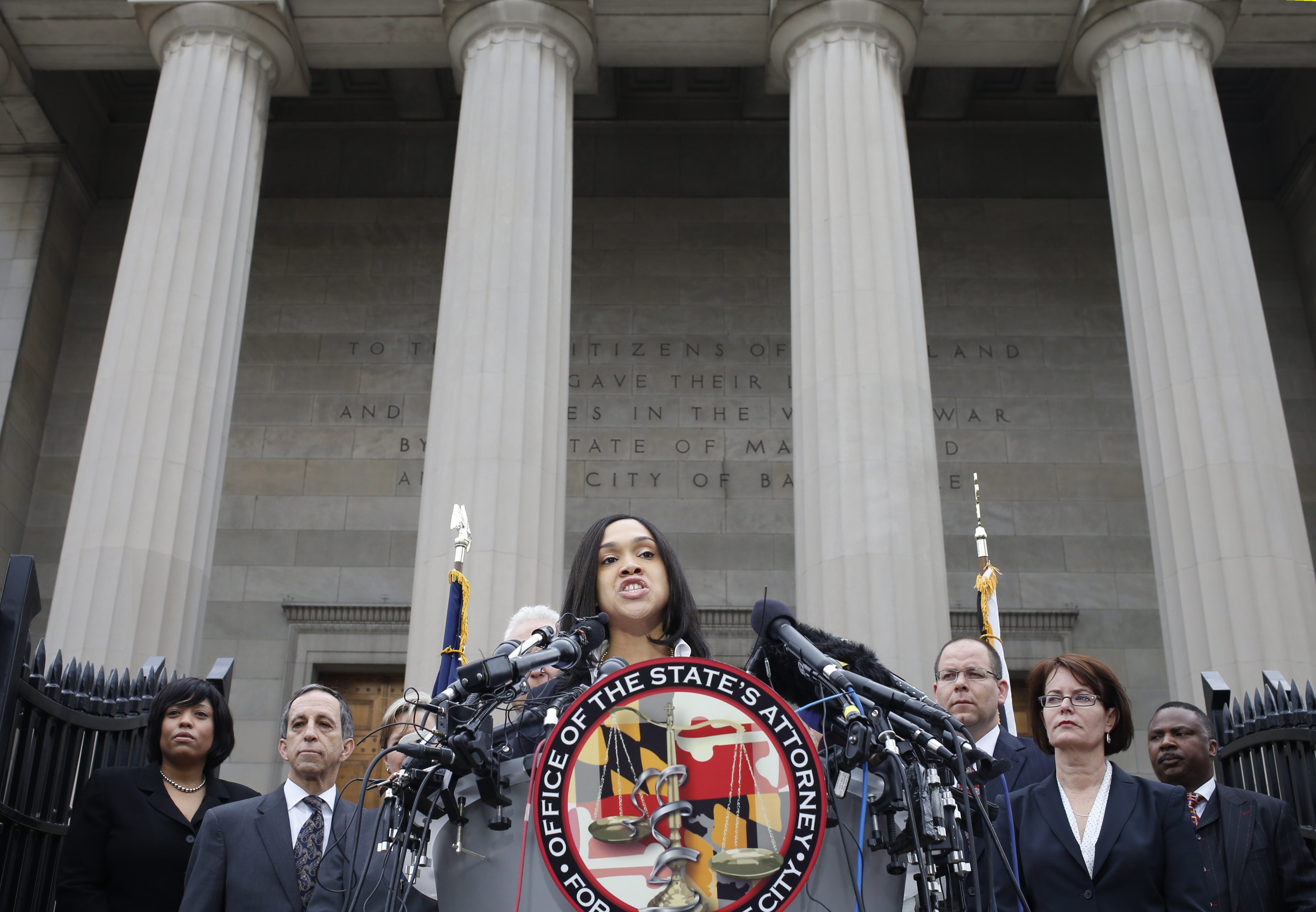 BALTIMORE - Baltimore's top prosecutor acted swiftly in charging six officers in the death of Freddie Gray, who suffered a grave spinal injury as he was arrested and put into a police transport van, handcuffed and without a seat belt.

But getting a jury to convict police officers of murder and manslaughter will be far harder than obtaining arrest warrants.

Legal experts say the case is fraught with challenges. A widely shown video that captured the nation's attention shows Gray, 25, being loaded into the van, but not what happened once he was inside. Other than the accused officers, the only known witness is a convicted criminal later placed in the van's other holding cell, unable to see what was happening with Gray.

State's Attorney Marilyn J. Mosby announced the charges Friday amid a backdrop of a city in turmoil - four days after public anger over Gray's death triggered riots, with heavily armed troops enforcing a nightly curfew, and the day before protest marches that drew thousands.

By bringing charges less than two weeks after Gray's death, Mosby, 35, said her decision showed "no one is above the law."

"At the end of the day this was a thorough investigation to get to the right result and I believe that we did," Mosby told CBS News.

Within hours, the city's police union questioned the prosecutor's impartiality, accusing her of a rush to judgment and demanding she recuse herself from the case.

Mosby's youth and upbringing has drawn national interest. The 35-year-old mother of two is the youngest top prosecutor of a major city. She comes from a five generations of police officers, including her father, mother, aunts and uncles.

"Law enforcement is instilled so I recognize the commitment, the sacrifice that police officers make day in and day out, time away from their families, their daily sacrifice of their lives for the betterment of our communities," said Mosby. "I also recognize that there are individuals who usurp their authority and they avoid the public trust, it's unacceptable. Those individuals who usurp their authority, those individuals do a disservice to the really hard working police officers who risk their lives day in and day out."

Even some of those who support Mosby's stand worry further violence might erupt if she fails to win convictions.

Alan Dershowitz, a well-known criminal lawyer from New York and professor emeritus at Harvard Law School, suggested that Mosby's actions were motivated more by political expediency and short-term public safety than strong evidence. He called the charges "outrageous and irresponsible," especially a second-degree murder count filed against the van's driver under a legal principle known as "depraved heart."

A call Saturday to Mosby's spokeswoman for comment was not answered, and her voicemail box was not accepting messages.

Ben Herbst, a Baltimore defense attorney, told CBS News correspondent Wyatt Andrews the toughest case to prove is against the officer who drove the van. Officer Ceasar Goodson is charged with second degree "depraved heart" murder, a charge that requires the state to show that Goodson injured Gray on purpose, with extreme disregard for his life.

Herbst said the act of slamming on the breaks could be interpreted as meeting the criteria for that charge, but it will still be tough to prove to a jury.

Regardless of the motivation, the announcement of the charges immediately shifted the prevailing mood on the city's streets from one of rage to relief.

To win a conviction, city prosecutors will have to convince a jury that van driver Caesar Goodson acted so recklessly that he knew his actions could take Gray's life. The classic example often taught in law schools is that a person who drops a flower pot off the balcony of a skyscraper onto a busy sidewalk below, or someone who fires a gun into a crowded bus.

Across the nation, it is very rare for law enforcement officers to be charged following fatal encounters with suspects, much less convicted by jurors often predisposed to give extra weight and credibility to the accounts provided by police.

Mosby's speediness in ordering the officers' arrests stands in stark contrast to the slow pace of the investigations that resulted in no criminal charges against the officers involved in the deaths of Michael Brown in Fergusson, Missouri, or Eric Garner in New York City. Mosby also does not have the benefit of a video capturing a decisive moment where lethal force was used, such as a video showing a North Charleston, South Carolina, police officer shooting a fleeing Walter Scott multiple times in the back. Despite initial claims by authorities that the shooting was in self-defense, the officer was quickly charged with murder after the video was provided to the media.

In the Gray case, the video evidence is much murkier, with no visual evidence the officers purposely hurt him. Expert witnesses are likely to disagree on whether Gray was seriously injured when the officers pinned him to the sidewalk and cuffed his hands behind his back. Gray was recorded being hefted toward the waiting van, his feet dragging along the ground.

In her statement of facts, Mosby alleged the officers later also bound Gray's feet together and placed him in the van face-down, rather than buckling him into a seat belt, as required by departmental procedures. That would have left Gray unable to brace himself as he slid around on the floor during the van's travel through Baltimore. She also recounted the multiple stops made by the van, even after it likely became clear Gray was in distress. Nearly an hour passed before Gray received medical attention.

However, the prosecutor steered clear of specifically alleging Goodson took Gray on a "rough ride," a term commonly applied in Baltimore to a practice of the driver making quick stops and sharp turns so as to slam the prisoner around in the back of the van.

Glenn Ivey, a defense attorney and the former chief prosecutor in Prince George's County, Maryland, said Mosby's prosecution would likely be considered successful if she were to secure any felony conviction against the officers that results in lengthy terms in prison. Second-degree assault carries a maximum sentence of 10 years.

"Typically in police cases, if you get a conviction on almost any of the charges, it's viewed as successful, because police cases are hard to win," he said.

Even in Baltimore, where juries tend to be skeptical of police officers, they can still make compelling defendants and persuasive witnesses, said Ivey, who is currently a candidate for Congress in Maryland's Washington suburbs.

During his tenure as a prosecutor, Ivey secured a 45-year sentence against a county homeland security official and former police officer in the shooting of two furniture deliverymen at his home, a rare case in which a law enforcement officer was charged with murder. Keith Washington was convicted of involuntary manslaughter.

Andrew Levy, a longtime Baltimore defense attorney and adjunct professor at the University of Maryland School of Law, said lawyers could argue that their individual clients cannot be held responsible for Gray's death.

"If you dissect this from the initial pursuit to the initial detention to the arrest to the transfer to the vehicle, that's a pretty complicated timeline, and I think we're going to hear lots of defense from individuals basically that will distill down to, 'It wasn't my job. I was just following orders,'" Levy said. "Those are not frivolous defenses in a context like this. Not everybody is necessarily responsible for everything."

Defense attorneys for the officers will likely use Mosby's public statements about the case against her in requests that the venue for the trial be moved outside of Baltimore. Though such changes of venue are relatively rare, there have been several examples of such motions being granted in cases that have garnered intense media coverage or where local officials are deemed to have made public statements that could unfairly influence potential jurors.

An example where that happened was the prosecution of the police officers acquitted in the 1991 video-taped beating of Rodney King. The trial was moved from Los Angeles to a much-less racially diverse suburb, where a jury acquitted the lawmen - triggering violent riots that left wide swaths of the city smoldering.