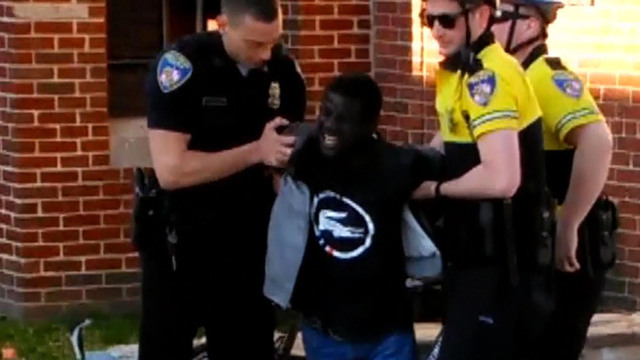 Another cell phone video gives new perspective in the arrest of Freddie Gray, the Baltimore man whose family said suffered a fatal spinal-cord injury after he was handcuffed and put in the back of a police van, reports CBS News correspondent Chip Reid.

The new video, obtained by CBS Baltimore station WJZ, shows the police van, moments later, stopped a little more than a block from the arrest site.

Police say Gray was irate in the back of the van -- so they briefly removed him to put on leg irons.

The man who took the amateur video told police he saw it all.

Baltimore police identified the six officers involved in Gray's arrest. They have been suspended with pay.

There are three parallel investigations going on now, by the local prosecutor's office, the Baltimore police and the federal government.

Gray was arrested after a brief on-foot chase April 12th. At one point, he asked officers for an inhaler and medical attention. He died a week later.

Gray's voice box was crushed and his spine was 80 percent severed, his family said.

Baltimore police said he was "arrested without force or incident."

"The lesson here was that he should have run and he didn't run fast enough," Billy Murphy, who represents the Gray family, said.

He said Baltimore police did not have enough evidence to arrest the 25-year-old.

"We do know that while in police custody this man was grievously catastrophically injured and it caused his death," Murphy said.

Hundreds of people gathered Tuesday night to protest, looking for "justice for Freddie."

"The whole damn system is guilty as hell," protesters shouted.

"We have a police department that have open season on black men in this city," protester Kendrick Scott said.

About a block from where the arrest was made, a man was wearing a black ribbon on his shirt:

"Tied just like just like the breast cancer one, and you put it on your left side or your right side and you're supporting 'Black Lives Matter,"' the man said.

The protests have been peaceful and Murphy has every reason to believe they will continue to be.

"We are urging restraint," Murphy said. "We want everybody to take their time, don't lose your cool, don't destroy property, don't do anything stupid."

An autopsy has been conducted but it is expected to be 10 days until officials release the findings.

For this city that has decades of distrust in police, that's sure to leave Baltimore on edge.