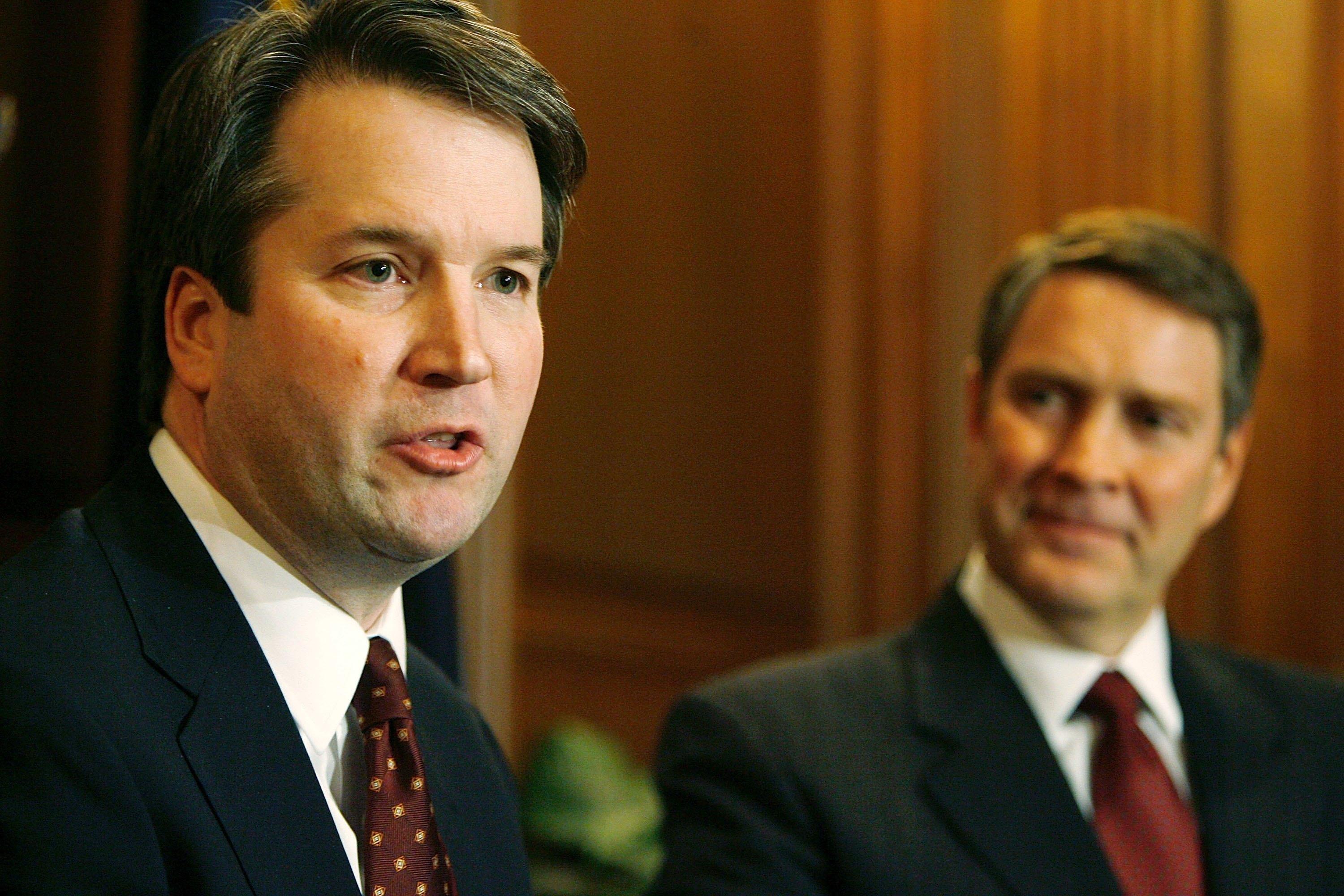 The first text I received after news broke that President Trump had picked D.C. Appeals Court Judge Brett Kavanaugh was from a GOP campaign staffer working in the trenches:

And that may be the biggest appeal of this Bush administration veteran among conservative activists and Trump fans. Not that he's the biggest movement conservative on the list—he wasn't--but that he may well be the most difficult for Democrats to stop.

"He's not the most populist choice, or the most politically provocative. But he's a serious movement conservative, brilliant, universally well-liked, experienced, and independent-minded, and a devoted critic of the administrative state."

"If you're a Federalist Society conservative who wants to win the long-term arguments about how law is made, Brett Kavanaugh is a great choice," McLaughlin said.

Across the political spectrum on the Right, conservatives are praising the Kavanaugh pick. The Independent Women's Forum, a conservative group that argues "all issues are women's issues," released a statement praising Kavanaugh for believing in "judicial humility and the separations of powers." J. Christian Adams of the conservative Public Interest Legal Foundation said, "President Trump has again delivered on his promise to appoint judges who revere the Constitution."

So the Right knows that Kavanaugh is not the "Trumpiest" pick. He's about as "GOPe" (conservative shorthand for the DC Republican establishment) as one can get: Yale grad, two decades as a government lawyer and judge, clerked for Justice Kennedy, worked for the Bush administration. For some pro-Trump conservatives, that's a strike against him.

But he's also got a resume of experience and accomplishment that is virtually unassailable. He's got the credentials, he's got the credibility. Democrats opposing his nomination will not be able do so, many conservatives believe, for any reason other than pure, partisan politics. That's what, they believe, makes him a nightmare for Democrats.

Not that everyone on the Right is on board. Last week at the conservative website Daily Caller, there was some off-the-record grousing about Kavanaugh as the "low-energy Jeb Bush" pick on Trump's list. "We've seen this movie before," Tim Wildemon, president of the America Family Association, said last week. "A conservative president compromises with the left on our nominees. What do we get? A court packed with Kennedy, O'Connor, Souter and Roberts."

And yet his conservative backers are quick to point out his strong support for religious liberty, an important issue to many on the Right. At one point in his career, Kavanaugh ran the Federalist Society's Religious Liberties Practice Group, doing pro bono work for the cause. Russell Moore of the Southern Baptist Convention said that he was confident that Kavanaugh would be a "strong defender of the freedoms guaranteed by the Constitution and Bill of Rights, especially our First Freedom of religious liberty."

There are also some rumblings from the libertarian wing of the GOP about his support for Bush-era policies like mass data collection on citizens, raising questions about whether he'll have the support of Sen. Rand Paul of Kentucky.

"Kavanaugh is not another Gorsuch—not even close," Rep. Justin Amash, a libertarian-leaning Michigan Republican, tweeted Monday night. "Disappointing pick, particularly with respect to his #4thAmendment record. Future decisions on the constitutionality of government surveillance of Americans will be huge. We can't afford a rubber stamp for the executive branch."

But it's hard to believe Sen. Paul would block a SCOTUS pick with an overall track record of limiting government and hewing to the text of the Constitution as extensive as Judge Kavanaugh's. And Paul has promised to "keep an open mind."

Perhaps the most astute take on how conservative activists feel about Kavanaugh comes from National Review's David French, who describes him as "a home run, but not a grand slam."

"The question — given this unique moment in which the Trump administration is listening to the best conservative legal minds, Republicans control the Senate, and the filibuster is a thing of the past — is whether Kavanaugh represents the grand slam," French wrote recently at National Review.

Listening to liberals describe Kavanaugh as some sort of fringe figure from the cult known as the Federalist Society, it may be hard to fathom the notion that there are judges more on the conservative side of jurisprudence than Kavanaugh. There are. But what matters for conservatives who want the court out of the business of crafting legislation and overruling the democratic process isn't that Kavanaugh is the most conservative judge on the list, but that he's definitely to the Right of Justice Kennedy.  And that's he's likely to stay that way.

"Kavanaugh is a strong choice - a sharp, considered thinker who is wise beyond his years," says Steve Hayes, editor of the Weekly Standard and a Fox News regular. "The hysteria from the professional Left and Democrats in Congress says more about their dependence on the courts than it does about what kind of a Justice Kavanaugh will be."