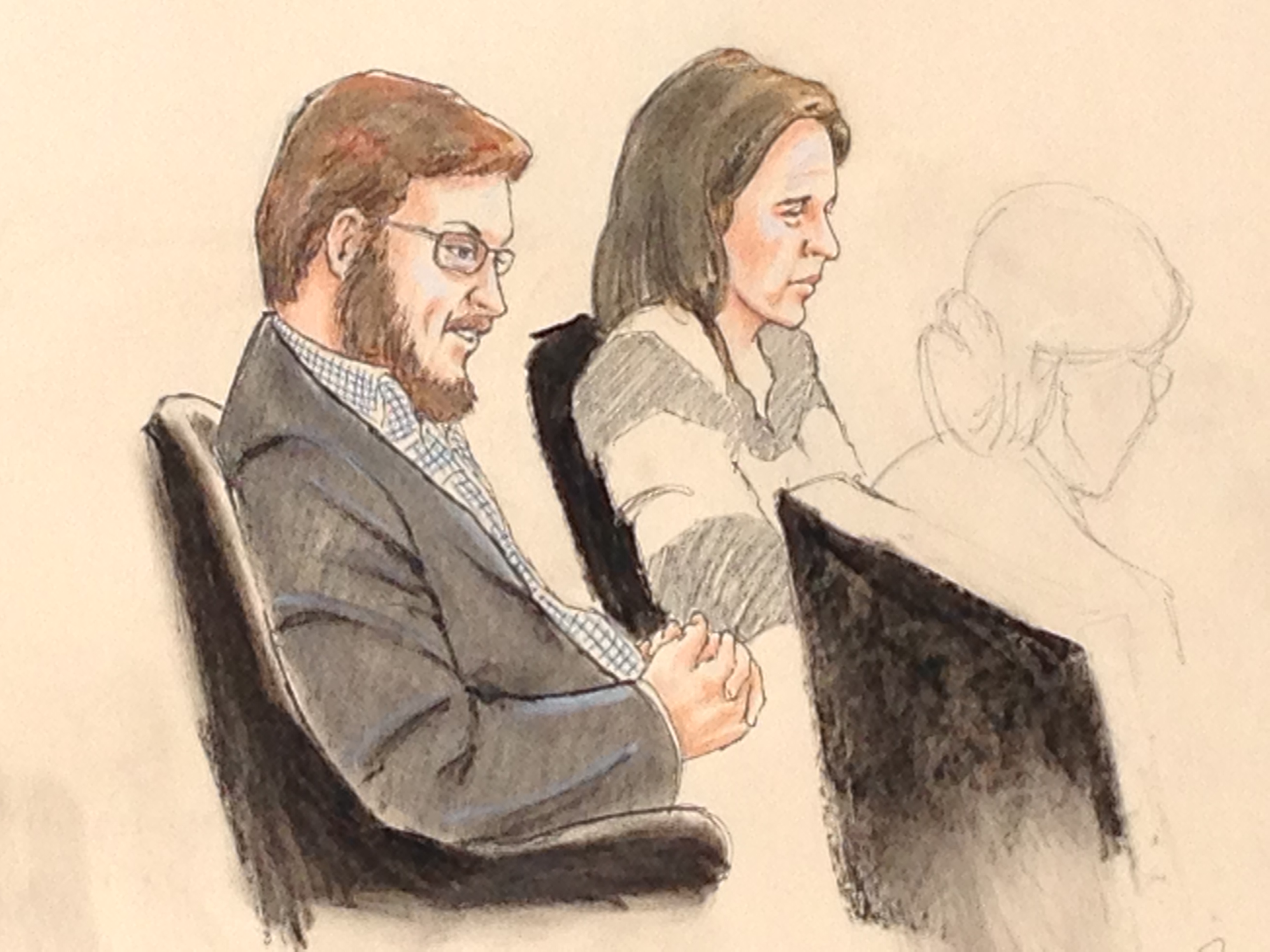 CENTENNIAL, Colo. -- Theater shooting defendant James Holmes sat quietly and leaned back in his chair in court on Tuesday just hours before the start of the arduous process of choosing a jury to decide whether he was sane when he opened fire in a packed Colorado movie theater.

It was the first time Holmes has been seen by the public in civilian clothes since the 2012 shooting. He had no visible restraints, though the judge had ordered him to be tethered to the floor in a way the public couldn't see for the trial.

CBS News' Julie Gauthier reports that Holmes wore a blue and white button-down dress shirt, tan, pleated slacks and a charcoal-grey suit jacket. His hair is short with a slightly bushy beard and he was wearing tortoise-shell, oblong glasses.

Holmes smiled from time to time with his attorneys and swiveled in his chair, Gauthier reported. Holmes was cuffed prior to departing the courtroom.

His appearance was in contrast to earlier court hearings where he wore jail uniforms and occasionally had wild orange hair and wide eyes.

An unprecedented jury pool of 9,000 people was initially summoned but later fell to 7,000 after some summons could not be delivered and some people were excused.

The pool will be winnowed to a handful in the weeks ahead to hear the death penalty trial that could last until October.

Jury selection was set to begin later in the day with the first group of several hundred people filling out questionnaires.

During a morning hearing, Judge Carlos Samour suggested that attorneys might not have to screen all the prospective jurors before beginning to select panelists. He said the process could stop after a few thousand people are screened if he and both sides agree they have a large enough pool from which to choose a jury.

The defense also objected to the use of a video during the trial, saying prosecutors gave it to them too late. The video is apparently from the jail where Holmes is being held, but its contents have not been made public.

The judge also spent about 25 minutes going over ground rules for jury selection and the trial, urging attorneys on both sides to be professional and respectful.

"We're going to be spending a lot of time together," Samour said.

The scope of jury selection and the trial are testaments to the logistical hurdles of trying the rare case of a mass shooter who survives his attack.

"The public is going to get an insight into the mind of a killer who says he doesn't know right from wrong," said Alan Tuerkheimer, a Chicago-based jury consultant. "It is really rare. It just doesn't usually come to this."

In the 2 1/2 years since the shooting, the case has sparked an emotionally charged debate, with Holmes' parents begging for a plea deal that would save his life while many survivors and family members of victims have demanded that he be put to death.

Twelve people died and 70 were injured in the attack during a midnight showing of a new Batman movie. Holmes, 27, was arrested as he stripped off his combat gear in the parking lot of the Century 16 movie theater.

He later pleaded not guilty by reason of insanity to multiple counts of first-degree murder and attempted murder.

If jurors find him guilty, they must then decide whether to recommend the death penalty. If Holmes is found not guilty, he would be committed indefinitely to the state mental hospital.

Defense attorneys acknowledge Holmes was the gunman in the July 20, 2012, attack but say he was in the grip of a psychotic episode at the time.

Under Colorado law, defendants are not legally liable for their acts if their minds are so "diseased" that they cannot distinguish right from wrong. Part of the reason the case has dragged on so long is the battle over whether that standard applies to Holmes.

Few details on those arguments have been made public. Prosecutors and defense attorneys remain under a long-running gag order, and court documents detailing the issue have stayed under seal.

Holmes' sanity was evaluated by a state psychiatrist but the results were not made public. Prosecutors objected to the findings and persuaded a judge to order a second evaluation. Those results were contested by the defense.

Prosecutors previously rejected at least one proposed plea deal made by attorneys for Holmes, criticizing the lawyers for publicizing the offer and calling it a ploy meant to draw the public and the judge into what should be private plea negotiations.

Survivors of the attack and family members of victims have had a long time to get ready for a trial.

"We've all been to therapists and have talked to our families and have our support groups, so we're prepared," said Marcus Weaver, who was shot in the arm and whose friend, Rebecca Wingo, died in the attack. "It's gonna be quite the journey."

It could take until June to find the jurors and alternates who were not biased by the widespread news coverage of the shooting. Equally challenging will be finding jurors who were not personally affected by the attack.

Judge Samour called nearly nine times as many prospective jurors as were summoned in the ongoing Boston marathon bombing trial. That meant the county's 600,000 residents had a nearly one-in-50 chance of being selected.