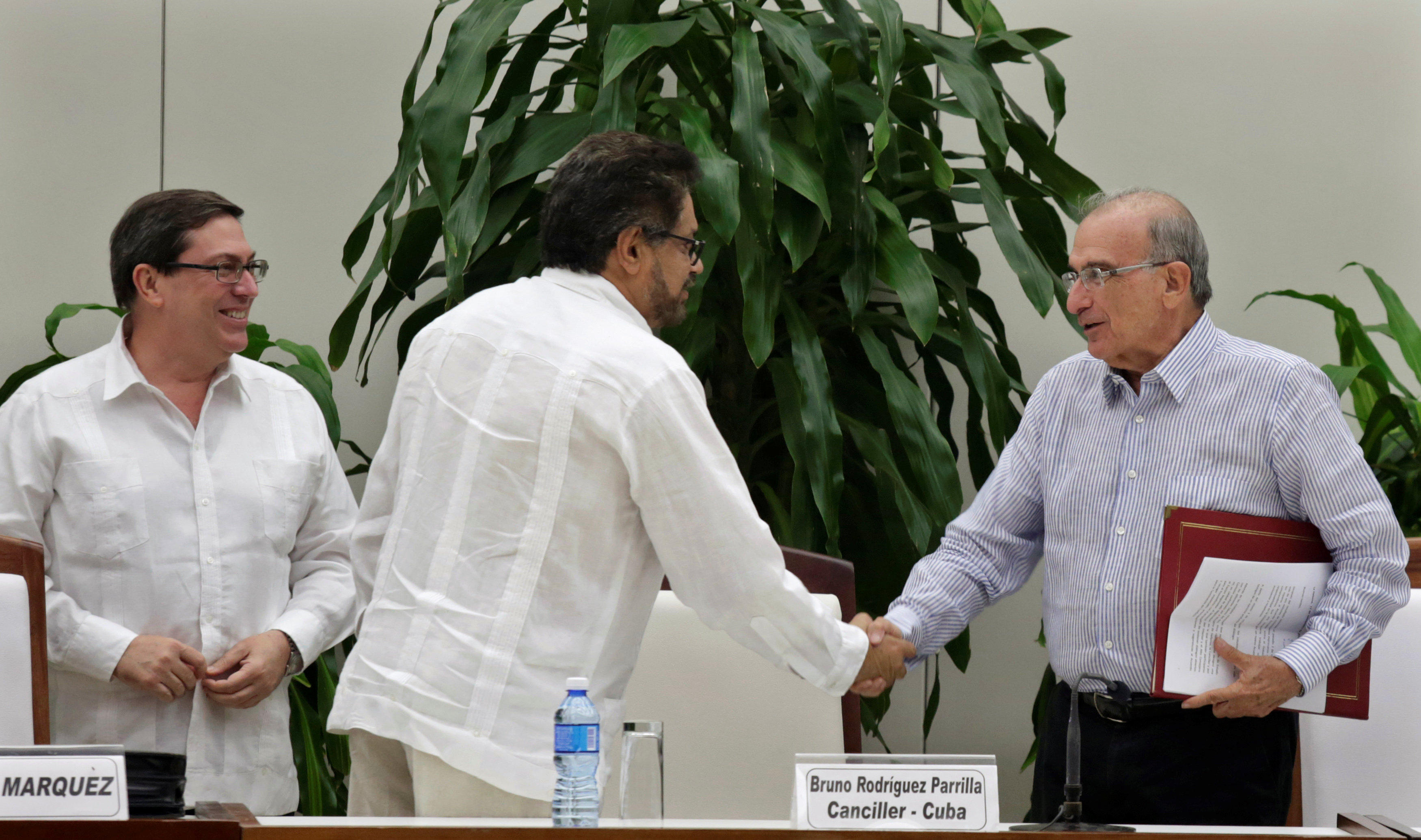 HAVANA -- Colombia’s government and its largest rebel group signed a new, modified peace accord on Saturday following the surprise rejection of an earlier deal by voters in a referendum.

The latest agreement aims to address some of the concerns of opponents of the original accord, especially former President Alvaro Uribe who said the deal was too lenient on a rebel group that had kidnapped and committed war crimes.

“The new deal is an opportunity to clear up doubts, but above all to unite us,” said chief government negotiator Humberto de La Calle, who signed the accord along with rebel negotiator Luciano Marin, alias Ivan Marquez, in Cuba, moving to end a half-century-long conflict that has claimed more than 220,000 lives.

De la Calle described the text of the modified accord as “much better” than the previous one, but didn’t say if or how it would be submitted to a referendum.

President Juan Manuel Santos and the Revolutionary Armed Forces of Colombia inked an initial peace deal on Sept. 26 amid international fanfare after more than four years of negotiations. But voters rejected it on Oct. 2 by just 55,000 votes, dealing a stunning setback to Santos who won the Nobel Peace Prize for his efforts to end Colombia’s conflict.

Santos immediately began looking for ways to rescue the deal and the sides extended a cease-fire until Dec. 31 to get the modified deal done. The rebels insisted they wouldn’t go back to the drawing board and throw out years of arduous negotiations with the government.

“The meetings with the FARC delegation were intense,” said De la Calle. “We worked 15 days and nights to reach this new agreement.”

De La Calle said some of the modifications made were related to transitional justice, punishment for conflict participants accused of war crimes, and reparations for the victims, points of contention with opponents of the original deal. The negotiator added that details of how and where rebels would serve time for any crimes committed had been cleared up. Judgments for drug trafficking will be in accordance with Colombia’s penal code and be heard by the country’s high courts. He said further details would be released later.

“We are convinced that this accord offers roads to peace that are viable and possible,” he said.

U.S. Secretary of State John Kerry congratulated Colombians, including Santos and those from the “no” campaign, for reaching the new peace deal.

“After 52 years of war, no peace agreement can satisfy everyone in every detail. But this agreement constitutes an important step forward on Colombia’s path to a just and durable peace. The United States, in coordination with the Government of Colombia, will continue to support full implementation of the final peace agreement,” he said in a statement.

Hours before the deal was announced, Uribe, a conservative who was Colombia’s president from 2002 to 2010, had asked that it “not be definitive” until opponents and victims of the conflict could review the text.

Following a meeting with Santos in Colombia, Uribe read a statement to reporters saying he had asked that the “texts to be announced from Havana” not be official until they had been reviewed.

Uribe and his supporters had demanded stiffer penalties for rebels who committed war crimes and criticized the promise of a political role for the FARC, a 7,000-strong peasant army that is Latin America’s last remaining major insurgency. They didn’t like that under the old deal guerrilla leaders involved in crimes against humanity would be spared jail time and allowed to enter political life.

FARC negotiator Ivan Marquez said “the implementation of the accord is all that remains for the construction of the bases for peace in Colombia.”

Simultaneously, the government is trying to advance peace talks with the country’s second-biggest rebel group. But Santos wants the National Liberation Army, known by its Spanish initials ELN, to first free a former congressman it has held captive for six months before holding negotiations.

The ELN is far smaller than the FARC and was founded in the same year, 1964. Inspired by the Cuban revolution, it is ideologically more doctrinaire and recalcitrant than the FARC, which grew out of peasant self-defense forces. It has fewer than 2,000 fighters, making it less than one-third the size of the FARC.