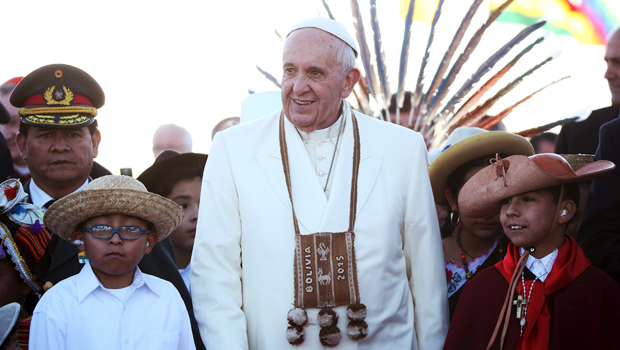 LA PAZ, Bolivia -- According to a flight attendant who served Pope Francis on a flight Wednesday between Quito, Ecuador, and La Paz, Bolivia, the Pope drank a tea made of a combination of coca leaves, chamomile and anise.

Tea made from coca leaves is a common remedy for altitude sickness in the Andes. The airport in La Paz, at more than 13,000 feet above sea level, is the highest in the world.

"He asked me for 'trimate,' which is really common also in Argentina," the flight attendant on the Boliviana de Aviacion flight said.

Before landing in La Paz, journalists traveling on the papal flight were also offered "trimate" as well as tea made solely from coca leaves, which has a mild flavor similar to green tea.

Coca leaves are the main ingredient in cocaine, but chewing on coca leaves or drinking tea made from them is legal and widespread in this part of the world.

The Vatican had said that the 78-year-old Pope would spend no more than four hours in La Paz to minimize negative effects from the altitude. Francis lost part of a lung as a teenager due to an infection.

Bolivian president Evo Morales hugged the Pope when he got off the plane. Morales, a former coca farmer, then gave the Pope traditional pouch commonly used to hold coca leaves.

During the welcome ceremony at the airport, the Pope appeared robust, delivering an energetic speech urging Bolivians, who are the poorest South Americans, to continue to build an inclusive society that does not leave out the poor and disadvantaged. He also said the Catholic church needed to continue to play an important role in the life of the country, which is overwhelmingly Catholic.

Francis said the church had deep roots in Bolivia, and "has continued to shed its light upon society, contributing to the development of the nation and shaping its culture."

The message could not have escaped Morales, an Aymara Indian whose relationship with the Catholic church has been combative. A new constitution passed in 2009 made Bolivia a secular state. At official state ceremonies, Catholic rites were replaced by Andean ones venerating the earth goddess Pachamana.

But Morales has declared himself an admirer of Pope Francis, saying last week that he and the Pope "coincide enormously in politics, the social and the economic."

After the welcome ceremony, the Pope paid a courtesy visit to Morales at the Presidential Palacebefore he addressed Bolivia's political, civic and cultural leaders. He later flew to Santa Cruz, in the southern part of the country.