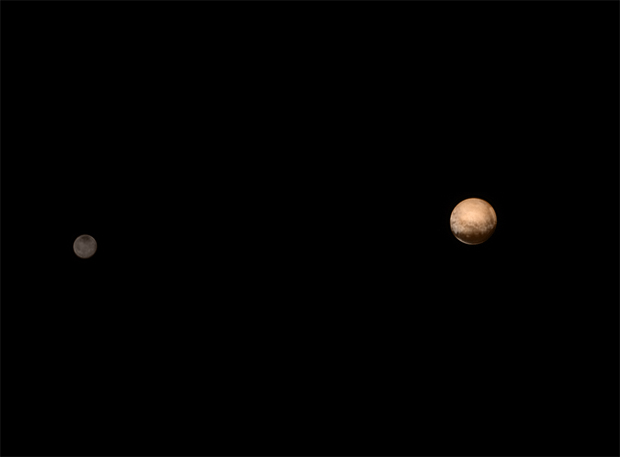 NASA's New Horizons probe, racing toward a July 14 flyby at more than 31,000 mph, is sending back sharper and sharper views of the dwarf planet and its Texas-size moon Charon as it closes in, giving excited scientists a taste of things to come.

Launched in 2006, the $720 million New Horizons mission is just now getting to Pluto after a journey of some three billion miles. After flying past the remote world Tuesday at a distance of about 7,500 miles, New Horizons will continue on into the vast Kuiper Belt, passing by at least one more ice dwarf in 2019.

Photos taken on July 8 at a distance of 3.7 million miles show Pluto in increasingly sharp relief, with a bright heart-shaped region seen earlier and a dark whale-like area near its equator. The world looks somewhat similar to Mars, with with a distinctly reddish hue. Pluto's moon Charon, roughly half the size of the dwarf planet, also is coming into sharper relief, a distinctly grayish body with a darker polar cap.

Scientists believe Pluto collided with a large body in the distant past, throwing debris into space that later coalesced to form Charon and four other smaller satellites. Data collected during the New Horizons flyby could help flesh out -- or possibly disprove -- that theory.