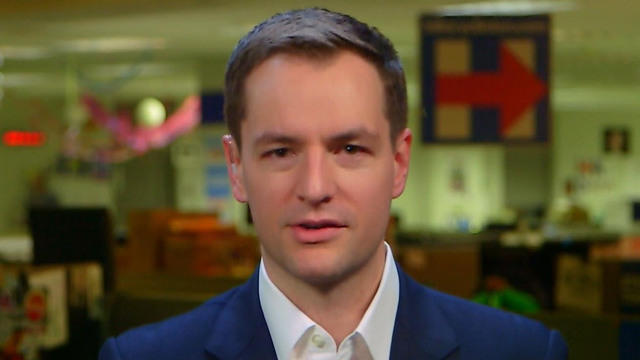 Clinton campaign manager Robby Mook said he was disappointed by what he termed Donald Trump’s mudslinging during last night’s second presidential debate, and by the Republican nominee’s threats that, if elected, he would seek to have the former Secretary of State imprisoned.

Trump: “If I win, I’m going to instruct the attorney general to get a special prosecutor to look into your situation because there’s never been so many lies, so much deception.  … “
Clinton:  “It’s just awfully good that someone with the temperament of Donald Trump is not in charge of the law of our country.”
Trump: “Because you’d be in jail.”

“I would say it’s chilling that Donald Trump thinks that the presidency is like some banana republic dictatorship where you can lock up your political opponents,” Mook said on “CBS This Morning.” “The career staff at the Justice Department have ruled on this issue. Again, this is just Donald Trump trying to intimidate Hillary, bully Hillary, and change the debate from anything but himself. I think he should apologize.”

He also criticized Trump’s “stunt” prior to the debate, at which he featured women who had previously accused former President Bill Clinton of sexual abuse.

The Washington Post reported that Trump’s campaign tried to seat those women in the Trump family box, in order to intimidate Hillary Clinton and embarrass her husband, before the Commission on Presidential Debates intervened.

“The whole situation is very disappointing,” Mook said. “Donald Trump’s campaign has had a string of disasters: His failed performance in the last debate, his vice presidential nominee refused to defend him at his debate; and then, obviously, we had the [Alicia] Machado controversy, taxes, and this videotape that came out last Friday. Donald Trump is trying to change the dynamic but I would argue he is just digging the hole deeper with these attacks and trying to drag this debate down. We will continue to talk about the issues.

“We were all disappointed by Donald Trump’s stunt event prior to the debate. He went into this debate intent on throwing Hillary Clinton off her game and trying to sling a lot of mud. Hillary showed up at the debate wanting to talk to the American people about the specific plans she has to make a difference in people’s lives. I think she had the opportunity to do that. Unfortunately, she had to do quite a bit of fact-checking on Donald Trump throughout. But we feel like we got that done.”

“They are calling it the ugliest, nastiest debate ever,” anchor Gayle King said. “Did you feel that way to you watching it?”

“I was disappointed, first of all, that Donald Trump wanted to make this about mudslinging,” Mook replied. “I was disappointed about the stunt that he tried to pull just about an hour beforehand. And, unfortunately, he continued a string of inaccuracies and lies; the fact-checkers have said that. So, yeah, I was disappointed in that. But like I said, I do think despite it all, Secretary Clinton was able to make a clear case. She articulated clear plans on health care, foreign policy and many other topics.”