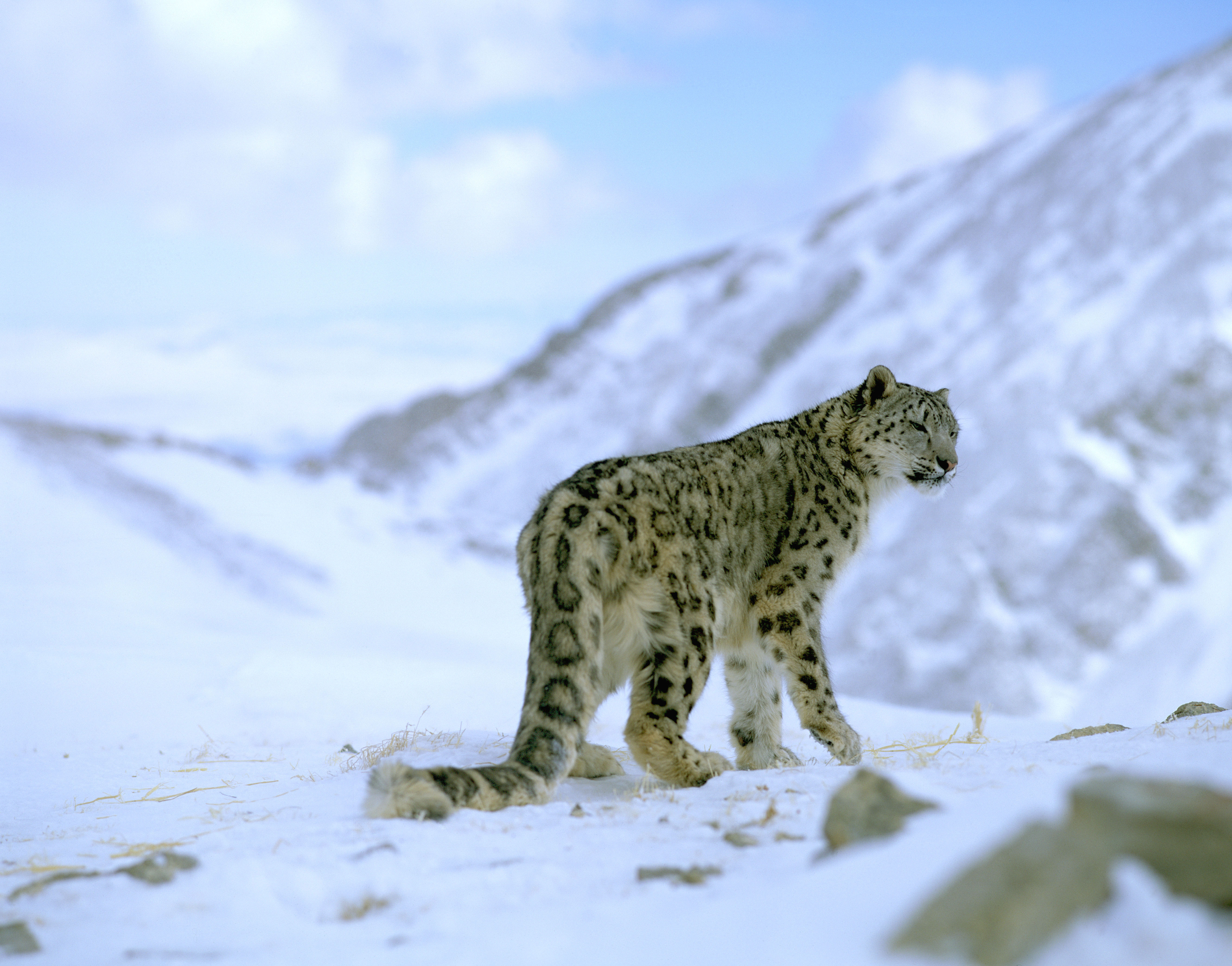 Climate change could hurtle one of the world's most elusive big cats close to extinction.

It is estimated that there are as few as 4,000 snow leopards left in Central Asia's high mountains. Poaching and habitat loss have contributed to a 20 percent population decline over the last 16 years, and a new study from the World Wildlife Fund warns that the habitat loss from the effects of climate change could wipe out the species.

The report was released Friday on the first International Snow Leopard Day, which is meant to raise awareness for conservation of the endangered species. The WWF found that warming temperatures could cause a change in the cats' mountainous climates, leaving more than a third of the habitat unsuitable for snow leopards. Currently, less than 14 percent of the big cat's habitat has been studied by research or conservation activities, according to the report.

"Climate change is a major risk, but we also need to concentrate on other factors," Sami Tornikoski, leader of the WWF's Living Himalayas Initiative, said in a press release. "Snow leopards won't survive for long unless we tackle climate change alongside other threats such as poaching, retaliatory killings by herders, declining prey species, and poorly planned development."

Snow leopards range over a large expanse of 12 countries -- Afghanistan, Bhutan, China, India, Kazakhstan, Kyrgyz Republic, Mongolia, Nepal, Pakistan, Russia, Tajikistan, and Uzbekistan. Despite this being a large land area, the animals' populations are segmented in tiny fragments, and it is estimated that there are a mere 2,500 breeding adults alive in the wild.

Radical shifts in the region's climate would have a trickle-down effect, impacting not just the leopards, but the mountain communities that depend on the region's natural resources. More than 330 million people live within 6 miles of rivers that stem from the animal's habitat. Water contributed by monsoons, summer rains, melting glaciers, winter storms, and permafrost are part of a complex water system that forms the headwaters of more than 20 water basins that contribute to the water supplies of 21 countries, including China.

WWF researchers state that an increase in temperatures could shift the tree line -- or the furthest edge of a habitat where trees are capable of growth -- higher up the mountains, which would encourage plant species less appealing to the leopard's prey. This alteration in the tree line could increase aridity, or make the air dryer, shift the timing of water availability, and effectively melt the permafrost and glaciers.

The study finds that the northern and eastern part of the animal's range would be most impacted by a changing climate, making China, which is home to the largest population of snow leopards, particularly vulnerable.

While the statistics might look bleak, it is difficult to exactly quantify how climate change will impact the species, given that studies like those from the WWF are projections.

"It is bleak, but it's not hopeless. I think climate change is a new, emerging threat and it will definitely have an impact on snow leopards," Brad Rutherford, the executive director at the Snow Leopard Trust, the oldest organization working to protect the animal, told CBS News. "It's hard to measure the precise impact that a rise in tree lines could have. It could change prey species availability for the cats, but the question is 'what happens above?' Does this open up new areas (in the mountains) for the prey species? It's difficult to know exactly what could happen in the long-term."

So, what can be done to protect the animals now? Rutherford said that conservation is difficult, given the wide expanse of land that the animals traverse. In 2013, President Almazbek Atambayev of the Kyrgyz Republic and officials representing the 11 other countries that contain snow leopard populations endorsed an ambitious conservation effort for the species. At the Global Snow Leopard Forum in Bishkek, Kyrgyz Republic, the countries pledged that 20 healthy landscapes would be officially secured for the snow leopard range by 2020.

Rutherford said that in addition to these efforts, technology like research cameras capturing real-time footage of the elusive animals have helped put a compelling face to the conservation efforts.

"Originally, you had cameras with just 48 exposures, which wasn't enough to capture the animals. You'd have a goat walk in front of the camera and never catch a glimpse of a snow leopard," he said. "Now, you have cameras that can hold about 15,000 to 20,000 photos that can capture the cats. When I started (at the trust) in 2000, there were only 20 or 30 wild snow leopard photos available. Now, we have hundreds of photos thanks to research cameras, and we can bring those to the general population. They are incredible images of a very elusive cat."

Given the threat that human development and warming temperatures are having on the animals' habitat, Rutherford added that preserving the species is a net positive for both human and cat.

More than 3.5 million people have been infected in California alone.