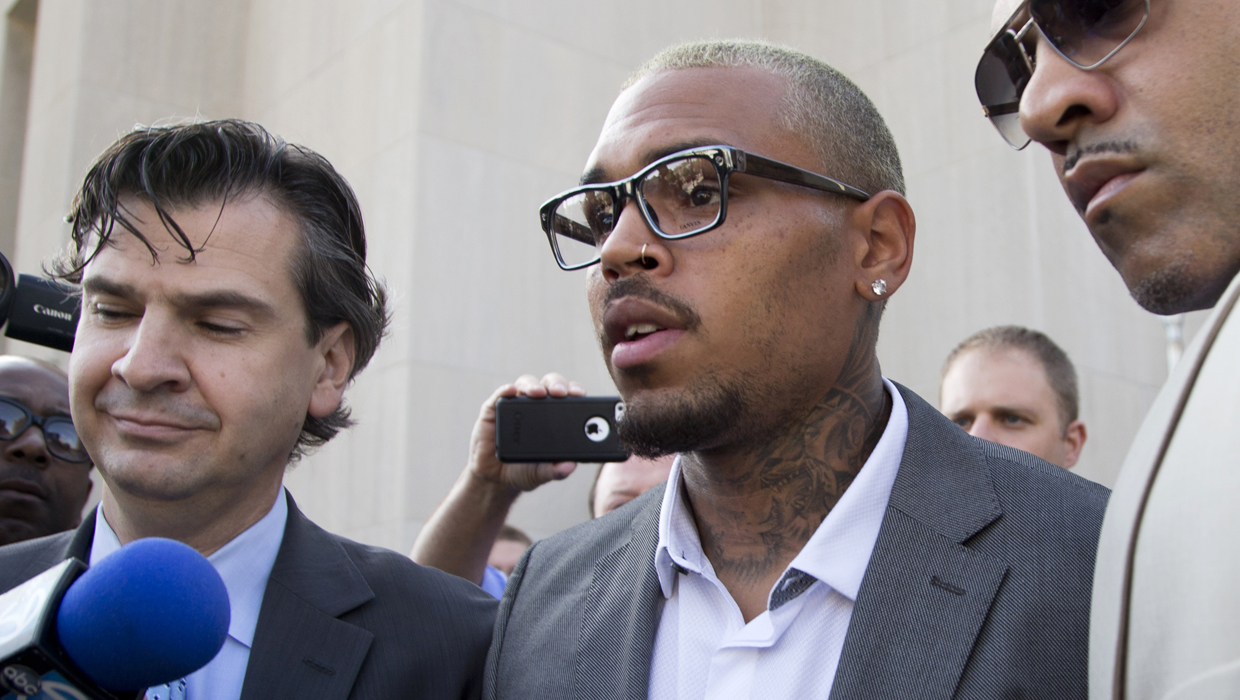 Chris Brown has pleaded guilty to hitting a man outside a Washington hotel, an assault that occurred while he was on probation for attacking his then-girlfriend Rihanna.

Brown pleaded guilty on Tuesday to misdemeanor assault and was sentenced to time served. He spent two days in a District of Columbia jail in this case.

The Grammy-winning singer, 24, was arrested in October. The victim told police Brown hit him after he tried to get in a picture the singer was taking with two women.

Brown had previously pleaded not guilty in the case. His trial had been set for April, but it was delayed.

At the time of his Washington arrest, Brown was on probation in a felony assault case in California for attacking Rihanna hours before the 2009 Grammy Awards. Because Brown was still on probation, the outcome of his Washington case had potential repercussions in California. During a court hearing in May, a Los Angeles judge sentenced Brown to serve an additional 131 days in jail. He was released in June.

Brown's attorney, Danny Onorato, argued that Brown had already been punished extensively for the assault, noting the time he spent in jail in California and four months he spent receiving inpatient counseling after his probation was revoked.

"To say that he's been punished severely in this matter is an understatement," Onorato said. He said Brown's career has been on hold for nearly a year and he wanted to take responsibility for his actions so he could go back to work, including a tour in support of a new album.

Brown spoke only briefly, saying: "I would like to say to the court that I'm sorry." He did not comment as he left court, swarmed by photographers and a handful of fans.

Brown's bodyguard, Christopher Hollosy, was also charged in the same Washington scuffle. He was accused of being the second person after Brown to strike Parker Adams outside the W hotel. Hollosy was convicted of misdemeanor assault in April. He has not yet been sentenced.

Brown had a squeaky clean image before his attack on Rihanna, but since then he has had several flare-ups that have been reported to authorities and noted by Los Angeles prosecutors. Brown broke a window after a 2011 "Good Morning America" interview in New York and was accused of snatching a woman's cellphone in Miami after she tried to snap pictures of the singer. He was also slightly injured in a New York nightclub brawl and, earlier this year, was accused of being involved in a fistfight with Frank Ocean's entourage over a parking spot at a West Hollywood recording studio.

He was not charged in any of the incidents, but they have tarnished his public image, even as legions of fans continue to support him. Many of Brown's more than 13 million Twitter followers continue to come to the singer's defense.

Brown's recent tweets have not referenced any of his legal troubles. Many of the posts have been promoting his upcoming album, "X," which comes out Sept. 16.