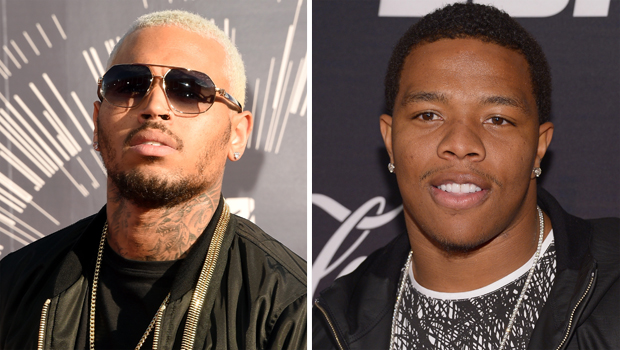 Chris Brown is weighing in on the controversy surrounding Ray Rice.

During an interview with MTV News, the singer was asked about the football player, who was cut from the Baltimore Ravens and suspended from the NFL this week after video emerged showing him hitting his then-fiancee.

"I think it's all about the choices you make," Brown, 25, said Thursday when asked by Sway Calloway about what he's learned. "With me, I deal with a lot of anger issues from my past -- not knowing how to express myself verbally and at the same time not knowing how to cope with my emotions and deal with them and understand what they are."

"So I think help is great," he added. "I still talk to my therapist twice a week, and it helps me to...if I'm frustrated and I'm dealing with something, to vent and say what I'm going through so I can hear from an actual clinical person, 'this is how you should react,' or 'it's good to feel this way because feelings, emotions, and energy are supposed to come and go. It's not supposed to stay there, you're not supposed to keep it inside, because it'll bottle up and you'll become a monster.'"

Brown was sentenced to five years probation after assaulting then-girlfriend Rihanna in 2009. Since then, he's also been involved in several other altercations -- he broke a window after a 2011 "Good Morning America" interview in New York and was accused of snatching a woman's cellphone in Miami after she tried to snap pictures of the singer. He was also slightly injured in a New York nightclub brawl and, earlier this year, was accused of being involved in a fistfight with Frank Ocean's entourage over a parking spot at a West Hollywood recording studio. Earlier this month, he pleaded guilty to hitting a man outside a Washington hotel and was sentenced to time served.

Brown went on to say, "For me, dealing with my anger issues and understanding myself and the life I've been through, where I'm headed and where I want to be has helped me focus on what's really important and not F up. For anybody who's going through that situation or anybody who's dealing with it -- it's all about the choices. Every situation is different but it's all about the choices you make and how you control your anger."

He finished by offering advice to Rice.

"To Ray, or anybody else -- because I'm not better than the next man -- I can just say I've been down that road. I deal with situations and I've made my mistakes too, but it's all about how you push forward and how you control yourself."