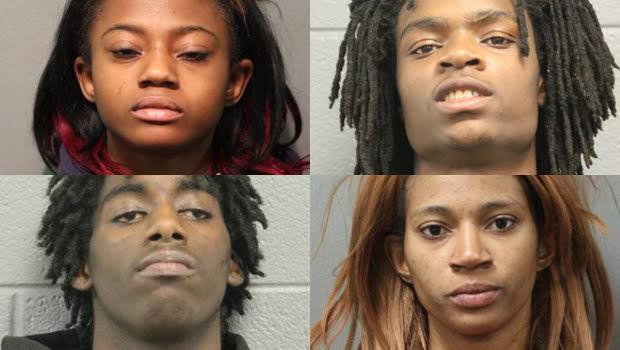 CHICAGO -- Four black suspects have been charged with hate crimes in an attack on a mentally disabled white teen that was live-streamed on Facebook, according to the Cook County State’s Attorney’s Office.

Those charged are Jordan Hill, 18, of Carpentersville; and Tesfaye Cooper, 18, Brittany Covington, 18, and Tanishia Covington, 24, all of Chicago.  All four face charges of aggravated kidnapping, hate crime, aggravated unlawful restraint and aggravated battery with a deadly weapon. Hill, Cooper, and Brittany Covington also face burglary charges. Hill also was charged with robbery and possession of a stolen motor vehicle.

The four were expected to appear in court Friday. It wasn’t immediately clear whether they had lawyers.

The video shows assailants threatening the 18-year-old victim with a knife, cutting off his clothing and forcing him to drink from a toilet. Chicago police eventually found the victim “in distress” walking along a street, authorities said.

The assailants can be heard on the video using profanities against white people and President-elect Donald Trump.

Chicago Police spokesman Anthony Guglielmi acknowledged that the suspects made “terrible racist statements” during the assault, but he said the investigation showed that the victim was targeted because he has “special needs,” not because of his race.

“Let me be very clear – the acts in that video are reprehensible,” Chicago Police superintendent Eddie Jones said at a Thursday press conference announcing the charges.

Speaking Thursday, police Cmdr. Kevin Duffin said the victim was friends with suspect Hill, and the two had attended school together at one point. Saturday, the victim’s parents dropped him off at a suburban McDonald’s because he was planning on meeting a friend and spending the night.

Duffin said Hill stole a van and picked the victim up from the McDonald’s, driving him to Chicago. Duffin said Hill drove the van around Chicago for the next few days, and the two slept in the van. The victim thought the vehicle belonged to Hill, he said.

On Tuesday, Duffin said, Hill drove to the West Side home of the Covingtons, who are sisters. The alleged assault began there and escalated from a “play fight” between the victim and Hill, Duffin said. He said the female suspects, who were believed to have been smoking pot, bound the victim, Duffin said. The victim was taunted with racial slurs and disparaging comments about his mental capacity.

Excerpts of the video posted by Chicago media outlets show the victim with his mouth taped shut slumped in a corner as at least two assailants cut off his sweatshirt and others taunt him off camera. The video shows a wound on the top of the man’s head, and one person pushes the man’s head with his or her foot. A red band also appears to be around the victim’s hands.

Off-camera, people can be heard using profanities about “white people” and Trump. At least one woman is shown in the video.

During much of the video, the victim does not appear to make any attempt to defend himself or to escape his attackers.

A second video, which surfaced on Twitter, showed the suspects grabbing the teen’s head, shoving it into a toilet, and forcing him to drink, reports CBS Chicago.

Duffin said the teen was bound in a corner for about four or five hours, and the suspects admitted to beating him, kicking him, and making him drink toilet water. Eventually, a downstairs neighbor called police to complain about noise. The Covington sisters became angry with the neighbor, went downstairs and kicked in her door, Duffin said.

That’s when the victim was able to escape.

An officer who saw the victim wandering on the street said he was wearing an inside out tank top, jean shorts and sandals in cold weather, and was beaten and bloody. He said the teen was discombobulated and confused. The man was taken to a hospital, and it was later discovered that he had been reported missing from the suburb of Streamwood.

“He’s traumatized by the incident, and it’s very tough to communicate with him at this point,” Duffin said.

At about the same time, police took several people into custody at a nearby address where they found signs of a struggle and property damage. Investigators determined that the missing man had been at the same address.

Johnson described the video as “sickening.”

“It makes you wonder what would make individuals treat somebody like that,” he said Wednesday at a news conference.

The grandmother of a young woman associated with the video said the granddaughter she raised from infancy is “not this person.”

“I’m so upset, my head is about to bust open,” said Priscilla Covington of Chicago. “I don’t know if someone influenced her ... She had her ups and down. (She) was a good person. I’m so confused.”

Asked Wednesday about the racial comments on the video, Duffin said the four people in custody were “young adults, and they make stupid decisions.”

A hate-crime conviction can add up to three years to a prison sentence, according to Betsy Shuman-Moore, director of the Hate Crime Project for the Chicago Lawyers’ Committee for Civil Rights.

The video emerged at a time when police dealings with Chicago’s black community are being closely watched. Less than a year ago, the nation’s third-largest police force was sharply criticized by a task force for using excessive force and honoring a code of silence.

The department has also been the subject of a long civil-rights investigation by the Justice Department, which is expected to report its findings soon.