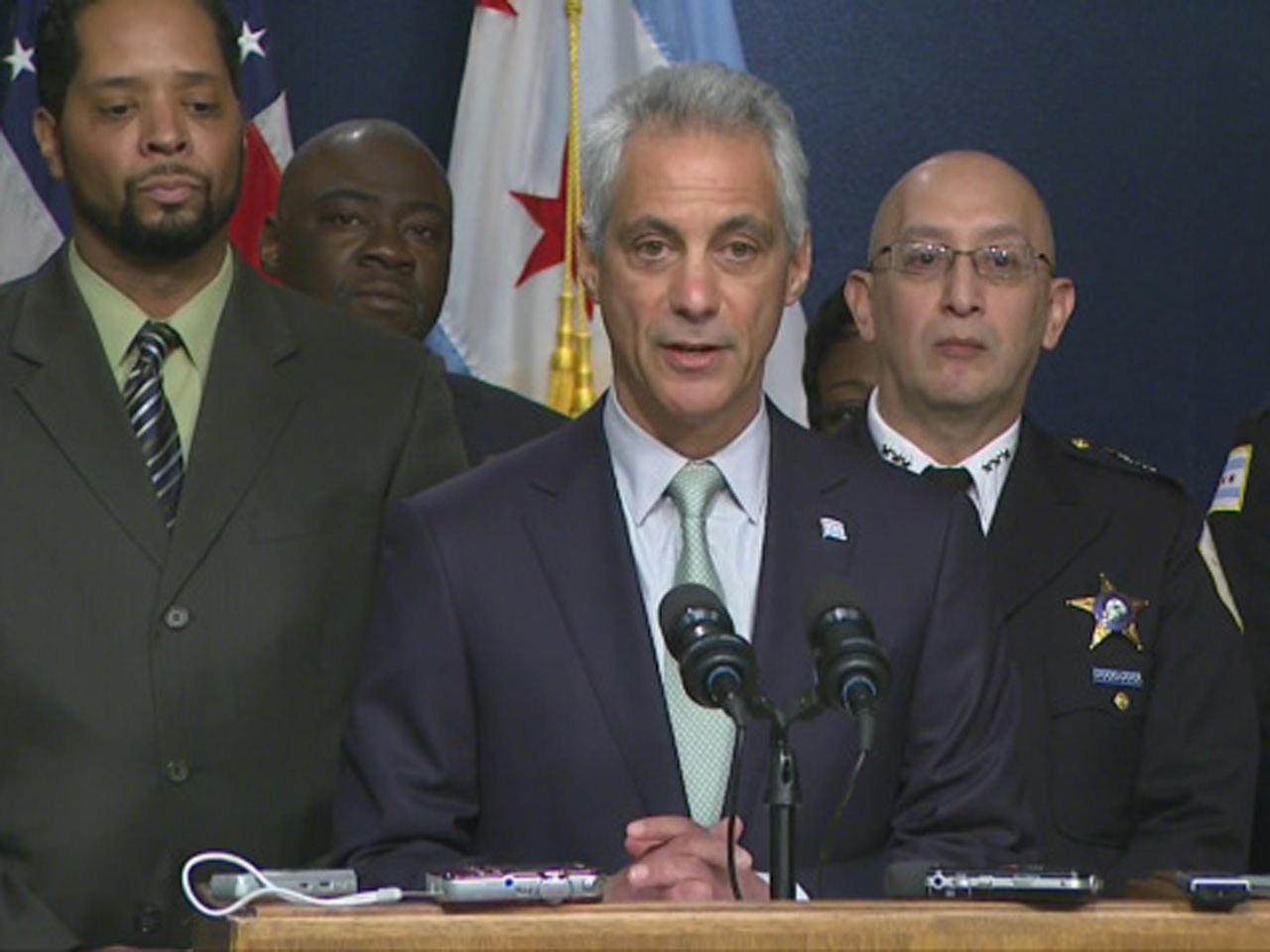 CHICAGO -- Mayor Rahm Emanuel said Wednesday that Chicago police must be better trained to distinguish between when they can use a gun and when they should use a gun, after a series of shootings by officers sparked protests and complaints that police are too quick to fire their weapons.

Emanuel announced changes in police training and department policies on use of force during a news conference. He also said the Chicago Police Department will double the number of Tasers available to officers -- from 700 to 1,400 -- as he works to restore public trust in the police force and his administration.

Every officer would be trained to use stun guns by June, and officers would be equipped with Tasers at the start of each shift, CBS Chicago reported.

"Our police officers have a very difficult and dangerous job. They put their lives on the line so the rest of us can be safe. And like all of us, they are human and they make mistakes," the mayor said. "Our job is to reduce the chances of mistakes.

"That requires us to give them the right guidance, the right training, and the right culture, to prevent abuses," he said. "Willful misconduct and abuse cannot and will not be tolerated."

Emanuel pledged training to make police encounters with citizens "less confrontational and more conversational." He said "force should be the last option and not the first choice."

Every police patrol car will be equipped with a Taser by June 1, 2016, he said.

Leaders and loved ones mourn Daunte Wright at funeral

Emanuel and Chicago police have been under heavy scrutiny since the city, under court order, released a squad car video last month showing white officer Jason Van Dyke shooting black 17-year-old Laquan McDonald 16 times in 2014. McDonald, armed with a knife, is seen veering away from Van Dyke in the video before the veteran officer starts firing.

The release of the video set off weeks of demonstrations, forced the resignation of Police Superintendent Garry McCarthy and has led to an ongoing, wide-ranging civil rights investigation of the entire Chicago Police Department by the U.S. Department of Justice. Protesters also have called for Emanuel to resign.

Activists were skeptical Wednesday that the changes would reverse decades of problems and mistrust between Chicago residents and police.

As for the plan to train more officers in the use of Tasers and have every beat car equipped with a stun gun, Jackson said "it's a little late."

"We need Tasers, cameras that work, police officials who care," he said.

Ted Pearson, one of the leaders of the Chicago Alliance Against Racist and Political Repression, noted that Emanuel made leadership changes after the release of the McDonald video and gave a speech before the City Council in which he apologized, appearing at times to be near tears.

Pearson's organization believes the only way to bring true change is for Chicago to have a civilian police accountability council that isn't appointed by the mayor.

Police said LeGrier was being "combative" before he was shot early Saturday. Both he and Jones were black.

Police have not released the race of the officer or officers involved in the Saturday shooting and will not say how many officers fired their weapons, or what the man and woman were doing before they were shot.

Emanuel had been vacationing with his family in Cuba when the shooting occurred. His office said he cut his trip short to return to Chicago on Tuesday night.

In a statement issued over the weekend, Emanuel said he ordered Escalante and the city's Independent Police Review Authority to review the department's crisis-intervention team training. The program teaches officers how to respond to a person in crisis or with mental health problems, and is aimed at resolving incidents without violence.

About 1,860 officers -- or roughly 15 percent of Chicago's police force -- have completed the training, according to department statistics. Advocates for the program say that number should be 25 to 35 percent.

In saying the number of Tasers will be doubled, Emanuel mentioned the McDonald shooting. He noted that on audio recordings of communications between dispatchers and officers on the scene that night, several officers can be heard "frantically" asking for a Taser before the shooting.

"I think obviously if you have eight officers -- like in the Laquan McDonald situation -- all calling for a Taser, and none of them have it, we have a problem, and it has to be addressed," Emmanuel said.

Police have said no officers or vehicles on the scene were equipped with one.

"There's a problem that has to be addressed," Emanuel said.