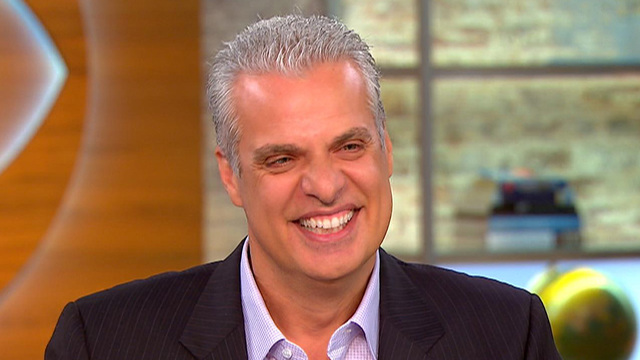 Years before he even got there, Eric Ripert pictured the restaurant he'd own. A psychic told him he'd work in a restaurant in a city surrounded by water. That became a reality, along with much more, all documented in his new memoir, "32 Yolks: From My Mother's Table to Working the Line."

Watching his mother and grandmother in the kitchen when he was growing up in France instilled an early passion for cooking in young Ripert. But it was in the kitchen of legendary French chef Jacques Pepin that nine-year-old Ripert felt "something different."

"He accepted the fact that I would come and observe in the kitchen and he would sit me next to the counter and I was fascinated by the moves, by what he was doing and by the smell and by the food that he was giving me, too," Ripert recalled.

Today, Ripert is synonymous with culinary excellence of the highest order. The James Beard Award-winning chef is co-owner of Le Bernardin in New York City, a seafood restaurant that has maintained a three-star Michelin rating - the highest possible - for the past 11 years.

"It's hard work, it's a life commitment. You need a lot of support and you have to have a clear vision, be very focused and work hard," Ripert said.

Ripert gets high praise from other leading lights of the culinary world, whose compliments of Ripert's talents abound.

"He understands that the quality of the product is everything, he's not afraid to let it be naked," said chef Mario Batali. "What he does with food on the plate and with the entire ideology of one of the greatest restaurants in the world is respect its simplicity."

"It's consistency over 30 years... excellence over 30 years," said chef Marcus Samuelsson. "He's given me a view to what excellence and commitment could look like... Did we say how handsome he is?"

"Unlike most chefs - everybody seems to agree - he is a great chef," said chef, author and TV host Anthony Bourdain, who is famous for his "bromance" with Ripert. The two recently went on a culinary "brotastic adventure" to Szechuan province in China. "He is kind of like Oliver Twist if Oliver Twist were, like, French and middle class with perfect hair," Bourdain adds.

In his earlier years, Ripert was mentored by another culinary great, chef Joel Robuchon. In his memoir, Ripert opens up about Robuchon's terrorizing teaching style in the kitchen, but said to this day, he still believes he is one of the best chefs in the world.

"It was very, very tough but at that time, in the kitchens in the eighties, every kitchen in three-star Michelin or in very luxurious restaurants were run in a very dictatorial way... Other kitchens you would see the pans flying at you or plates being thrown," Ripert said. "It was very demanding, but not violent."

Ripert's memoir is the latest addition to his growing book collection. He's written five cookbooks and expects to write another, but wanted to write something to "inspire young people" to encourage them that "it will be tough but they will get to where they want if they have the will." He gets personal about some of the painful ordeals he's faced in his childhood, including his parents' divorce, physical abuse from his stepfather and a predator priest.

"I'm very candid about it. I never talked about it at home with my friends because it's very hard to say... so I don't do that, but I had no problem to put it into the book," Ripert said.