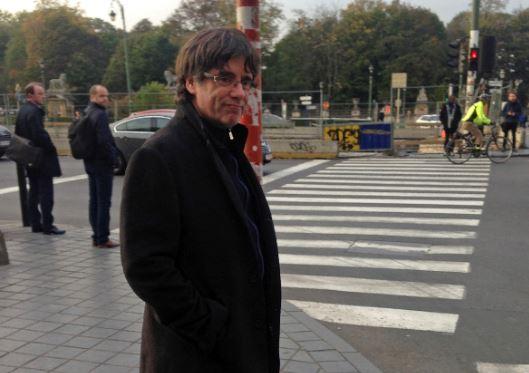 MADRID -- Ousted Catalan government members and lawmakers, with one notable absence, arrived at two Spanish courts in Madrid on Thursday to face possible charges of rebellion for having declared the region's independence.

Twenty regional politicians, including sacked regional government president Carles Puigdemont, were called to appear after the chief prosecutor demanded they be charged with rebellion, sedition and embezzlement following the Catalan parliament's declaration of secession Oct. 27.

But Puigdemont was not there, prompting the Spanish Supreme Court to issue a warning that it would be "normal" to issue a European arrest warrant for someone who fails to report for a summons. Spain could request an extradition from European Union partner Belgium if a warrant is issued.

Spain took the unprecedented step of seizing control of Catalonia following the declaration and later sacked the cabinet, dissolved the regional Parliament and called fresh regional elections for Dec. 21.

Puigdemont fled to Belgium with some of his ex-Cabinet members and would remain there, according to his lawyer.

Puigdemont's No. 2, Oriol Junqueras, was the first to arrive at the National Court. He went in accompanied by lawyers, passing by dozens of journalists, declining to answer questions.

The crimes being probed are punishable by up to 30 years in prison under Spanish law.

Just hours after the Catalan officials arrived at the courts, the Supreme Court suspended the questioning of six of them, including former Catalan parliament speaker Carme Forcadell, one of the leading figures of the pro-independence movement in Catalonia for many years.

Puigdemont had said he and several of his former ministers went to Brussels some days ago for "freedom and safety." Four of the ex-ministers remained in Brussels with him while the others returned and were to be appearing in court.

Besides the ex-Cabinet members, six regional parliament members were to appear before the Supreme Court in a parallel probe, including Forcadell, who arrived at the court shortly after 9 a.m. (0400 EDT).

About two dozen politicians and elected officials from Catalan separatist parties gathered at the gates of the Supreme Court in a show of support for them.

Assumpcio Lailla, a former lawmaker with Catalonia's Democrats party, said she had traveled to Madrid joining around 100 other politicians and elected officials to show support to those investigated in the rebellion probe.

"This is an unjust situation in which they are being investigated for facilitating democracy," she said. "I don't understand how Europe can look away from democracy."

The supporters greeted some of the lawmakers that are being questioned Tuesday at the Supreme Court cheering and shouting: "Freedom, Freedom" and "we are not afraid."

Across the street, half a dozen protesters with Spanish flags were stopped by police. They shouted at the Catalan politicians, "cowards" and "to jail, to jail."