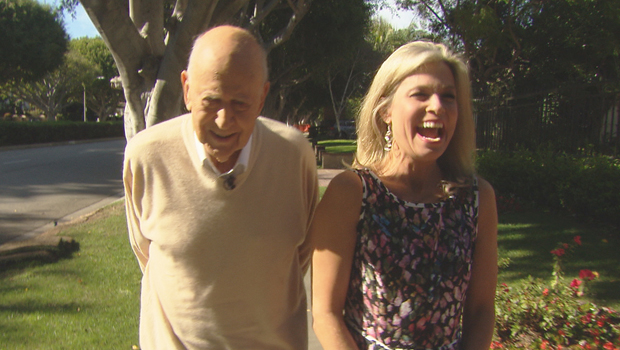 Carl Reiner started getting laughs on TV comedy more than 60 years ago. No wonder he's an entertainment legend -- a legend who's lost none of his legendary wit, as Tracy Smith discovered when she came to call:

So how does Carl Reiner feel these days? "Like a 93-year-old," he told Tracy Smith. "But I don't feel it in my head. I walk around the block all day, so my legs are good. So, what is 93? The number's scary!

"First thing in the morning, before I have coffee, I read the obits. If I'm not in it, I'll have breakfast."

At nearly 93, Reiner is in a shape people half his age might envy:

"My doctor says all my vital signs are perfect. I could live another hour!" he said.

The truth is, Smith said, he is still productive. "You're still writing. I mean, it's not like you're waiting around."

"No, no. I wake up every morning anxious to get to my -- what do you call it? We used to call it a typewriter. My computer!"

By any name, that keyboard is busy: Reiner's just finished the fourth volume of his memoirs, "What I Forgot to Remember." Clearly, the 12-time Emmy-winner has a lot to look back on.

Carl Reiner didn't create TV, but he was there in the delivery room. As a writer and performer, he was a giant among giants. His co-writers on Sid Caesar's "Your Show of Show" alone included Larry Gelbart (creator of the TV show "MASH"), comic genius Mel Brooks, and playwright Neil Simon.

In fact, he was on TV before he even owned a TV.

"Yes, we didn't have a TV when I did 'Show of Shows," he said. "And we finally got a little seven-inch set and the kids used to watch it. And Robbie was four or five or six, and he said, 'Say hello to me.' And I said, 'I can't say hello on television, but when I do this -- when I put my tie up in the finale while we're saying goodbye -- that's for you.'" Reiner did it every night.

"How sweet is that?" asked Smith.

But after years of writing sketch comedy, Reiner had an idea for a show of his own: a sit-com about a New York City comedy writer (like him), who lived in the suburbs with an adorable family (like his).

The pilot flopped. But Reiner had written 13 full episodes, and producer Sheldon Leonard thought of a way he could make it all work.

You might remember Leonard from "It's a Wonderful Life," as the bartender who tells it straight. ["Hey, look, I'm the boss. You want a drink or don't you?"]

Reiner recalled, "He says, 'We'd love to talk to you about these episodes.' I said, 'Fellas, I don't wanna fail with it a second time.' And he said, 'You won't fail. We'll get a better actor to play you.' And he suggested Dick Van Dyke."

The show which ran for five seasons on CBS, was a major hit. Reiner wound up playing the pompous boss, Alan Brady. But the rest of the show mirrored his life. In fact, Mary Tyler Moore's Laura Petrie was inspired by the real-life woman Reiner went home to every night.

"He was just extremely handsome," Estelle told CBS News back in 2007.

"I had a lot of hair in those days, black hair," said Carl."Too much black hair or too much wavy hair."

"No, no, he was really good-looking, but typical. I said tall, dark, and handsome."

They married in 1943, and had three children: Robbie, Annie and Lucas.

For a showbiz family, the Reiners were pretty normal. Robbie, the future director, had a pretty good arm. So did mom. And in the summer they'd all hit the beach -- sometimes with longtime family friend Mel Brooks.

Brooks and Reiner are still close.

Smith asked, "How often do you guys see each other now?"

"At least six, seven times a week," said Reiner. "He sits right there, we watch television."

There's nothing on TV like "The 2,000-Year-Old Man," an impromptu sketch gone wild, with Reiner interviewing Brooks as the oldest man in the world.

Reiner: "Many, many hundreds of years ago most men had more than one wife. Did you ever practice polygamy in those days?"
Brooks: "I never practiced it. I was perfect at it!"

Reiner himself was the oldest man in the star-packed "Ocean's Eleven" gang.

But his biggest box office hits were behind the camera, as director of comedies like "The Jerk" and "Oh, God," starring George Burns.

Court Clerk: "Do you swear to tell the truth, the whole truth, and nothing but the truth?"
God: "So help me, me."
Judge Baker: "So help you, you?"
God: "If it pleases the court, and even if it doesn't please the court, I'm God, Your Honor."

"You clearly are a guy who likes to make people happy," said Smith. "Is that a tough trait to have when you're a director?"

"No," said Reiner. "As a matter of fact, it's a wonderful trait to have. You can get the best out of people if they're happy and not worried or not frightened that they're going to make a mistake. Robbie does exactly the same. Don't demand anything of anybody. You hire actors who you think are going to be right for the part, and then you let 'em go."

Maybe that's why Rob Reiner cast his mom Estelle for a small, but climactic, moment in "When Harry Met Sally." ["I'll have what she's having."]

But what really got Estelle Reiner excited was singing, and as Carl wrote in his memoir, it was something Estelle loved until the day she died.

Smith asked, "Why did you decide to write about the last moments of her life?"

"Because it was sooo beautiful," he replied. "Estelle died at 94, when she was 94. And the last year of her life was lying in bed. She always thought she was going to go back and sing. And she couldn't really get out of bed. She had major problems. But her mind was always there.

"And at the last moment she wasn't even breathing -- a breath every minute, a little something. And we touched her. Nothing. And I said, 'She should go out hearing something lovely, like her last album.' So I put [it] on, the first song is, 'A, You're Adorable.' And that was playing. I said, 'Play it up loud. Maybe she'll hear it as she's going.' And we played it loud. And one of the hospice nurses says, 'Oh, she has such a lovely sweet voice.'

"And Lucas, my son, went right up to his mother he said, 'Ma, you hear what she said? She says you have a lovely, sweet voice.' And Estelle mouthed 'Thank you,' and passed away. Didn't aspirate it, but her lips, we all saw it. 'Thank you,' dead and gone.

And music still keeps him going. Reiner sings on his daily walks, and at one point, even considered a career as a crooner.

We're thankful Carl Reiner chose to make us laugh instead.