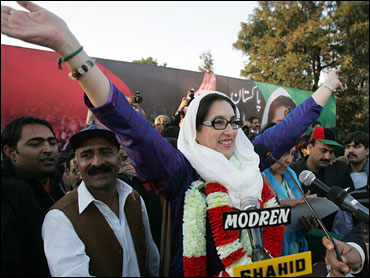 One week before the Iowa caucuses, the assassination of former Pakistani leader Benazir Bhutto pushed terrorism to the forefront in voters' minds and highlighted the candidacies of presidential hopefuls with long records on national security.

Bhutto's assassination on Thursday rippled through the presidential race as candidates scrambled to respond and adjusted campaign plans on a day overshadowed by the terrorist attack in Rawalpindi.

The deadly incident at an election rally in Pakistan could help presidential candidates such as Republican Rudy Giuliani, who was in charge of New York City when terrorists struck on Sept. 11, 2001, and Vietnam War veteran John McCain, a longtime member of the Senate Armed Services Committee.

On the Democratic side, Hillary Rodham Clinton has argued that her experience makes her prepared to lead the nation in troubled times. Rival Barack Obama has pushed a hard line in dealing with Pakistan and the search for Osama bin Laden.

Edwards said he "urged him to continue the democratization" process in Pakistan and also urged him to allow international investigators inside Pakistan to investigate the cause. (Read more about the call)

Earlier, in a statement, Edwards called Bhutto a "brave and historic leader" and focused on not delaying progress in Pakistan.

"At this critical moment, America must convey both strength and principle. We should do everything in our power to help bring the perpetrators of this heinous act to justice and to ensure that Bhutto's movement toward democracy continues," he said.

At a high school in Lawton, Iowa, on Thursday, Clinton said she had come to know Bhutto during the former prime minister's years in office and her time in exile and was "profoundly saddened and outraged" by the assassination.

In a world of such violence and threats, Clinton said, "it certainly raises the stakes high for what we expect from our next president. I know from a lifetime of working to make change."

"Her death is a tragedy for her country and a terrible reminder of the work that remains to bring peace, stability, and hope to regions of the globe too often paralyzed by fear, hatred, and violence," Clinton added in a statement.

Obama said he was shocked and saddened by Bhutto's death.

"She was a respected and resilient advocate of democracy for the people of Pakistan," he said. "We have to make sure that we are clear as Americans that we stand for democracy and that we will be steadfast in our desire to end the types of terrorist attacks that have blighted not just Pakistan but the rest of the of the world."

Giuliani said Thursday the assassination of Bhutto underscored a need for the U.S. to increase its efforts to combat terrorism.

"Her murderers must be brought to justice, and Pakistan must continue the path back to democracy and the rule of law," Giuliani said in a statement. "Her death is a reminder that terrorism anywhere - whether in New York, London, Tel-Aviv or Rawalpindi - is an enemy of freedom. We must redouble our efforts to win the terrorists' war on us."

McCain, in a statement, said the death of Bhutto "underscores yet again the grave dangers we face in the world today and particularly in countries like Pakistan, where the forces of moderation are arrayed in a fierce battle against those who embrace violent Islamic extremism.

"Given Pakistan's strategic location, the international terrorist groups that operate from its soil, and its nuclear arsenal, the future of that country has deep implications for the security of the United States and its allies. America must stand on the right side of this ongoing struggle," he said, noting that he has made numerous visits to Pakistan.

Former Massachusetts Gov. Mitt Romney was asked about Bhutto after his first campaign event at Norton's Classic Cafe, in Nashua, N.H., reports CBS News' Scott Conroy. He called for the U.S. and other countries in the West and the Muslim world to "come together to support moderate Islamic leaders, moderate Islamic people."

"This points out again the extraordinary reality of global violent radical jihadism," Romney said. "The world is very much at risk by virtue of these radical violent extremists and we must come together in an effort in great haste and with great earnestness to help overcome the threat of the spread of radical, violent Jihad."

On Wednesday night, Romney had criticized Pakistan President Pervez Musharraf for imposing martial law. Romney was asked if he had more sympathy for such action given the attack on Bhutto.

"I believe it was a mistake. I believe as well that martial law was principally imposed by him to protect himself from political challenge, a challenge from the Supreme Court and others, and believe that it was not a productive course for his nation," Romney said.

Republican candidate Mike Huckabee said the assassination was "devastating news for the people of Pakistan, and my prayers go out to them."

"The terrible violence surrounding Pakistan's upcoming election stands in stark contrast to the peaceful transition of power that we embrace in our country through our Constitution," Huckabee said in a statement. (Read more on Huckabee's reponse)

Another Republican candidate, Fred Thompson, an actor and former senator, said the assassination shows that the United States could be just "one terrorist plot away from having disaster visit us."

"It's indicative of the kind of world that we live in today. It is a dangerous world. It is a complicated world," he said. "We need to understand that it could be a lot closer than Pakistan for us if we don't do what is right."

Democratic presidential candidate New Mexico Gov. Bill Richardson, a former U.S. ambassador to the United Nations, called on President Bush to force Musharraf to step down. Until then, Richardson said the U.S. must suspend military aid to the Pakistani government.

"A leader has died, but democracy must live. The United States government cannot stand by and allow Pakistan's return to democracy to be derailed or delayed by violence," Richardson said.

Democratic candidate Sen. Joe Biden said this was a "terrible day" and in a statement urged Bhutto's followers to remain calm.

"I am convinced Ms. Bhutto would have won free and fair elections next week," Biden said. "The fact that she was by far Pakistan's most popular leader underscores the fact that there is a vast, moderate majority in Pakistan that must have a clear voice in the system. Her assassination makes it all the more urgent that Pakistan return to a democratic path."

"I urge Pakistan's leaders to open a fully accountable and transparent investigation," he added.

The fallout from Bhutto's assassination could benefit some candidates, but CBS News senior political correspondent Jeff Greenfield said any impact is likely to be small.

"Remember, since this wasn't a direct attack on Americans, the impact we're talking about is likely marginal and probably would help those with national security profiles like Sen. McCain, perhaps Rudy Giuliani, as opposed to say a Mike Huckabee," Greenfield said. "Among Democrats, Joe Biden's talked a lot about the dangers in Pakistan, Hillary Clinton's been talking about who you want in the Oval Office if something unpredictable's happened. And for its part, the Obama campaign said today that she voted for the war in Iraq which took our eye off the ball in that region when the Taliban and al Qaeda have gained strength."

The Bush administration has pushed hard for peaceful elections in Pakistan, a nuclear-armed nation led by Musharraf, a U.S. ally in the anti-terror war.

Bhutto was killed in an attack on an election rally in Rawalpindi. Many others were killed in a blast that took place as Bhutto left the rally where she had addressed thousands of supporters in her campaign for Jan. 8 parliamentary elections.

Bhutto served twice as Pakistan's prime minister between 1988 and 1996. She had returned to Pakistan from an eight-year exile Oct. 18. Her homecoming parade in Karachi was also targeted by a suicide attacker, and more than 140 people were killed. On that occasion she narrowly escaped injury.