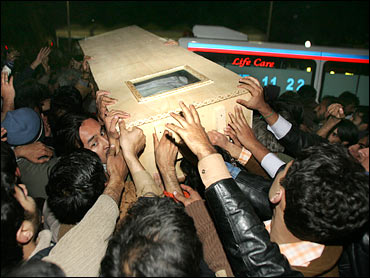 Pakistan opposition leader Benazir Bhutto was assassinated Thursday by an attacker who shot her after a campaign rally and then blew himself up. Her death stoked new chaos across the nuclear-armed nation, an important U.S. ally in the war on terrorism.

At least 20 others were killed in the attack on the rally for Jan. 8 parliamentary elections where the 54-year-old former prime minister had just spoken.

At least five people were killed across the country in rioting that broke out in the aftermath of the assassination. In the southern port city of Karachi, angry Bhutto supporters shot at police and burned a gas station.

At the hospital where Bhutto died, some supporters smashed glass and wailed, chanting slogans against President Pervez Musharraf. Musharraf blamed Islamic extremists for her death and said he would redouble his efforts to fight them.

"This is the work of those terrorists with whom we are engaged in war," he said in a nationally televised speech. "I have been saying that the nation faces the greatest threats from these terrorists. ... We will not rest until we eliminate these terrorists and root them out."

Musharraf convened an emergency meeting with his senior staff, where they were expected to discuss whether to postpone the elections, an official at the Interior Ministry said, speaking on condition of anonymity because of the sensitivity of the talks. Analysts say Bhutto could have commanded around 26 percent of the popular vote in the elections, reports CBS News correspondent Sheila MacVicar.

CBS News correspondent Richard Roth reports that a claim for the killing has come from al Qaeda, but a feeling that Musharraf's government shares the blame for Bhutto's death, whoever pulled the trigger, is widespread among her followers who make up the country's biggest political party.

The government announced three days of mourning for Bhutto, including the closing of schools, commercial centers and banks.

Nawaz Sharif, another former prime minister and leader of a rival opposition party, demanded Musharraf resign immediately and announced his party would boycott the upcoming election.

The attacker struck just minutes after Bhutto addressed thousands of supporters in the Rawalpindi, a city 8 miles south of Islamabad where the army is headquartered. She was shot in the neck and chest by the attacker, who then blew himself up, said Rehman Malik, Bhutto's security adviser.

Sardar Qamar Hayyat, a leader from Bhutto's party, said at the time of the attack he was standing about 10 yards away from her vehicle - a white, bulletproof SUV with a sunroof.

(CBS)
"She was inside the vehicle and was coming out from the gate after addressing the rally when some of the youths started chanting slogans in her favor. Then I saw a smiling Bhutto emerging from the vehicle's roof and responding to their slogans," he said.

"Then I saw a thin, young man jumping toward her vehicle from the back and opening fire. Moments later, I saw her speeding vehicle going away," he added.

"Mangled bodies lay in a pool of blood and pieces of clothing and shoes were scattered on the road. The clothing of some victims was shredded and people covered their bodies with party flags.

There was an acrid smell of explosive fumes in the air.

Police cordoned off the street and rescuers rushed to put victims in ambulances as onlookers wailed nearby.

Bhutto was rushed to the hospital and taken into emergency surgery. She died about an hour after the attack.

Hours later, her body was carried out of the hospital in a plain wooden coffin by a crowd of supporters. Her body was expected to be transferred to an air base and brought to her hometown of Larkana.

A doctor on the team that treated her said she had a bullet in the back of the neck that damaged her spinal cord before exiting from the side of her head. Another bullet pierced the back of her shoulder and came out through her chest.

She was given open heart massage, but the main cause of death was damage to her spinal cord, he said on condition of anonymity because he was not authorized to speak to the media.

"At 6:16 p.m., she expired," said Wasif Ali Khan, a member of Bhutto's party who was at Rawalpindi General Hospital.

"The surgeons confirmed that she has been martyred," Bhutto's lawyer Babar Awan said.

Bhutto's supporters at the hospital exploded in anger, smashing the glass door at the main entrance of the emergency unit. Others burst into tears. One man with a flag of Bhutto's Pakistan People's Party tied around his head was beating his chest.

"I saw her with my own eyes sitting in a vehicle after addressing the rally. Then, I heard an explosion," Tahir Mahmood, 55, said sobbing. "I am in shock. I cannot believe that she is dead."

Many chanted slogans against Musharraf, accusing him of complicity in her killing.

"We repeatedly informed the government to provide her proper security and appropriate equipment including jammers, but they paid no heed to our requests," said Malik, the security adviser.

As news of her death spread, angry supporters took to the streets.

One man was killed in a shootout between police and protesters in Tando Allahyar, a town 120 miles north of Karachi, said Mayor Kanwar Naveed. In the town of Tando Jam, protesters forced passengers to get out of a train and then set it on fire.

Two people were killed in the southern Sindh province and two others in Lahore, police said.

Violence also broke out in Lahore, Multan, Peshawar and many other parts of Pakistan, where Bhutto's supporters burned banks, state-run grocery stores and private shops. Some set fire to election offices for the ruling party, according to Pakistani media.

"I want to appeal to the nation to remain peaceful and exercise restraint," he said.

Rep. Patrick Kennedy, a Democrat from Rhode Island, was in Pakistan and on his way to have dinner with Bhutto Thursday night when he learned of her killing.

"You could really feel the tragedy of this loss because Bhutto really represented hope here for so many people," he said, adding that turmoil was engulfing much of the country.

"Her death really dashed the hope of many here in Pakistan and that's why there's so much disillusionment and anger being vented through these protests that are lighting up the sky tonight as people set fires all over the countryside," Kennedy told the AP in a telephone interview.

Sharif arrived at the hospital and sat silently next to Bhutto's body.

He rebutted suggestions that he could gain political capital from her demise, announcing his Muslim League-N party would boycott the elections and demanding that Musharraf resign.

"After the killing of Benazir Bhutto, I announce that the Pakistan Muslim League-N will boycott the elections," Sharif said. "I demand that Musharraf should quit immediately."

Hours earlier, four people were killed at a rally for Sharif when his supporters clashed with backers of Musharraf near Rawalpindi.

Bhutto's death will leave a void at the top of her party, the largest political group in the country, as it heads into the elections.

Pakistan is considered a vital U.S. ally in the fight against al Qaeda and other Islamic extremists including the Taliban. Osama bin Laden and his inner circle are believed to be hiding in lawless northwest Pakistan along the border with Afghanistan.

The U.S. has invested significant diplomatic capital in promoting reconciliation between Musharraf and the opposition, particularly Bhutto, who was seen as having a wide base of support in Pakistan. Her party had been widely expected to do well in next month's elections.

Had the PPP either won a majority of seats or enough to put together a majority coalition, Bhutto could have recaptured the job of prime minister.

Bush, speaking briefly to reporters at his ranch in Crawford, Texas, demanded that those responsible for the killing be brought to justice.

"The United States strongly condemns this cowardly act by murderous extremists who are trying to undermine Pakistan's democracy," said Bush, who looked tense and took no questions.

The assassination and concerns of further international instability were cited as one reason for a fall in U.S. stock prices and a rise in oil prices Thursday. In afternoon trade, the Dow Jones Industrial Average of blue chip stocks was down more than 140 points or more than 1 percent.

Pakistan was just emerging from another crisis after Musharraf declared a state of emergency on Nov. 3, and used sweeping powers to round up thousands of his opponents and fire Supreme Court justices. He ended emergency rule Dec. 15 and subsequently relinquished his role as army chief, a key opposition demand. Bhutto had been an outspoken critic of Musharraf's imposition of emergency rule.

"She's very much a hated person among the Islamists in Pakistan," said Michael Scheuer, terrorism expert for CBS News. "She was also hated amongst some of the other political parties and certainly an enemy of the military and intelligence services. So it's very surprising that she's lasted as long as she did."

Educated at Harvard and Oxford universities, Bhutto served twice as Pakistan's prime minister between 1988 and 1996.

Her father was Zulfikar Ali Bhutto, scion of a wealthy landowning family in southern Pakistan and founder of the populist Pakistan People's Party. The elder Bhutto was president and then prime minister of Pakistan before his ouster in a 1977 military coup. Two years later, he was executed by the government of Gen. Zia-ul Haq after being convicted of engineering the murder of a political opponent.

Just after she'd come back to Pakistan from exile last October, Bhutto escaped injury when a rally was bombed, reports Roth. Complaining the government was deliberately doing too little to help her stay safe, she was asked about quitting her election campaign.

"Well, of course campaigning now is so difficult. I don't think so much of myself but I think of the people who lost their lives," Bhutto said in October of 2007.

The question has been raised whether her exiled husband will step in and take her place, reports CBS News' Farhan Bokhari.

Islamic militants linked to al Qaeda and the Taliban hated Bhutto for her close ties to the Americans and support for the war on terrorism. A local Taliban leader reportedly threatened to greet Bhutto's return to the country with suicide bombings.

Hundreds of riot police had manned security checkpoints around the rally venue Thursday, Bhutto's first public meeting in Rawalpindi since she came back to the country.

In November, Bhutto had also planned a rally in the city, but Musharraf forced her to cancel it, citing security fears.