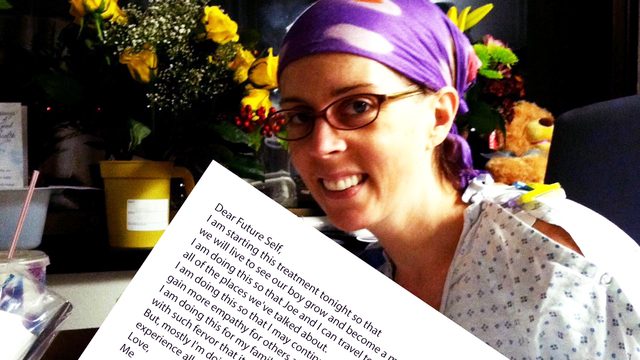 A cancer diagnosis can be a devastating blow for patients, and one program is trying to give them an outlet to express those raw emotions.

"Visible Ink" is a writing program designed for cancer patients at Memorial Sloan Kettering Cancer Center in New York. Participants work with experienced writers and editors who help them craft their stories -- some serious, some irreverent and funny. Each year, several pieces written by patients are selected for a staged reading with professional actors.

A new performance is set to take place Monday, March 31.

Kathleen Emmets, 37, who was diagnosed with Stage IV colon cancer in 2011, has seen her pieces performed, including one called "Dressing For Chemo" performed last year.

"It was more of an act of defiance," she told CBS News. "You may take my hair and my skin, but you are not going to take the essence of who I am."

Author Judith Kelman founded the program five years ago. A writer for 30 years, she's seen her parents and close friends go through cancer, and felt the program would give patients an outlet for their feelings.

"We give them permission, we say of course you can," she told CBS News. "You can do this -- and that elevates people."

More than 700 patients have enrolled in the program since its inception. It's gained backing from physicians who believe it can help patients who seem depressed.

"At this point, we have people prescribing Visible Ink to their patients," said Kelman. "They write it on a prescription pad. And the next thing you know this person is writing these beautiful pieces, some of them have pieces published," she said.

Emotional health is often affected by a cancer diagnosis, according to the American Cancer Society. About one in four cancer patients have clinical depression, and treatments such as counseling or medication might reduce suffering and improve quality of life.

Going through an illness like cancer can take a toll not only emotionally but financially, compounding the stress and depression. Last May, a study found people with cancer are twice as likely to go bankrupt than others without the disease.

Kelman has witnessed what she calls extraordinary transformations in some patients.

"They focus on something other than what they're going through, what they're worried about and what they can't do," she said. "And writing becomes something that defines them in a new and much better way."

Emmets ended treatment in December 2012, and tests have seen no evidence of disease.

She says the writing project gave her not only a sense of self and pride, but a sense of community.

"I felt less alone. And people started to understand what I was going through," she said. "I'm not someone who sits and (says) poor me, but when I'm writing, I'm honest."

Said Emmets of writing, "It changes people's lives to be able to speak and tell their story and have a sense of even if cancer takes me, I'll live on. I'm here."