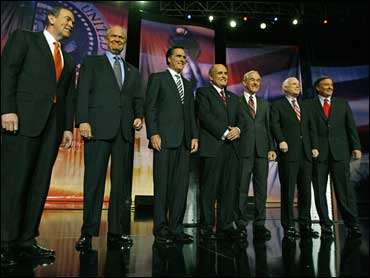 This story was written by CBSNews.com's Brian Montopoli and Alfonso Serrano.


You won't find Spanish on the Web site of most of the GOP presidential candidates. But click on a link on the upper right corner of Mitt Romney's site and you're greeted by a fresh faced young man speaking the language in an almost-perfect accent.

Craig, one of Romney's five sons, spent two years as a Mormon missionary in Chile, and his appearance in the half-minute video, in which he introduces his father in Spanish, is telling: Among the GOP candidates, Romney has been perhaps the most aggressive in courting the Spanish-language community.

The former Massachusetts governor, unlike his rivals, has a Spanish-language page on his Web site. He's run Spanish-language ads in Florida, including one featuring Craig. His campaign has a Latin America Policy Advisory Group, and Romney was the only Republican to attend the Republican National Hispanic Assembly's annual meeting. His press shop has pushed the ways in which Romney is "putting conservative principles to work for the Hispanic community."

"I don't think we're trying anything specifically different with Hispanic voters than with the voters in Iowa or anything else," Craig Romney, who has been doing Spanish-language interviews in Orlando and Miami, tells CBSNews.com. "We're just presenting my dad for who he is."

But Mitt Romney faces an uphill battle with Hispanic voters, and not just because a Miami Herald poll last month put rival Rudy Giuliani at 70 percent support among Hispanic Republicans in Florida. According to a new Pew Hispanic Center poll, Republicans have seen the gains they made among Hispanic voters under President Bush evaporate; Hispanics now favor Democrats over Republicans 57 percent to 23 percent.

That gap can be explained, in part, by the increasing prominence of illegal immigration as a campaign issue. Romney and Giuliani spent the opening portion of last month's CNN/YouTube debate sparring over who has taken the hardest line on the issue, and rival Mike Huckabee has taken criticism for backing a plan to offer college scholarships to the children of illegal immigrants. Huckabee and Fred Thompson have taken strong anti-illegal immigration positions, and Tom Tancredo and Duncan Hunter have made their opposition to illegal immigration central to their campaigns. Tancredo has aired two sensationalistic ads in Iowa, one linking illegal immigration to terrorism and the other focused on crime and South American gang activity in America. (

When asked in a November CBS News/New York Times poll which issues the candidates should be discussing, likely Republican caucus-goers in Iowa put illegal immigration at the top of the list, ahead of the war in Iraq and the economy. 44 percent said illegal immigrants should lose their jobs and leave the country.

Reverend Luis Cortes, a prominent Latino evangelical who supported Mr. Bush in 2004, recently invoked Nazi Germany in discussing Republican rhetoric over illegal immigration, saying a solution to the immigration problem needs to be found that does not "vilify an entire race."

At 46 million, Latinos make up 15 percent of the U.S. population and about 9 percent of the eligible electorate, and the Pew Hispanic Center estimates that they will make up 6.5 percent of voters in the upcoming presidential election. It's a relatively small group, but one that could make a big difference in a general election. Latinos represent a sizeable slice of the electorate in four of the six states Mr. Bush carried in 2004 by less than five percentage points: New Mexico (37%), Florida (14%), Nevada (12%), and Colorado (12%).

In the key early primary states of Iowa, South Carolina and New Hampshire, however, Hispanic voters make up just three percent of the electorate, according to Hispanic Business Magazine.

"It's important to point out the difference between enforcing the laws on immigration and respecting Hispanic culture," says Craig Romney. "There's a line that gets crossed sometimes when it comes to disrespecting the Hispanic culture and it's not something my dad is willing to do."

"There are very many issues that pertain to the Hispanic community that are not just the illegal immigration issue," he tells CBSNews.com.

That's particularly true in Florida, a crucial early primary state in which Hispanic voters are disproportionately Cuban and Republican. Giuliani's dominance in the state can be explained in part by his image, according to Luis Clemens, editor of CandidatoUSA, who closely follows the candidates' outreach efforts to the Hispanic community.

Romney, who does not speak Spanish, made a gaffe in the state in March when he uttered what he characterized as an inspiring phrase - "Patria o muerte, venceremos" - which is associated with Cuban leader Fidel Castro.

But McCain has not been particularly active in reaching out to the Hispanic community, though he recently launched a Hispanic Advisory Council. Thompson, who has a Hispanic media consultant, has done more outreach, and polls a distant second to Giuliani nationally among Hispanic voters, followed by McCain and Romney.

On Sunday, most of the GOP candidates gathered at the University of Miami for a Univision-sponsored debate broadcast in Spanish. (Tancredo boycotted, suggesting in a Miami Herald op-ed that the Spanish-language format "offends the spirit of democracy.") Many stressed that their values were also the values of the Hispanic community.

"I think some of the rhetoric that many Hispanics hear about illegal immigration makes some of them believe that we are not in favor of or seek the support of Hispanic citizens in this country," McCain told the audience.
By Brian Montopoli and Alfonso Serrano