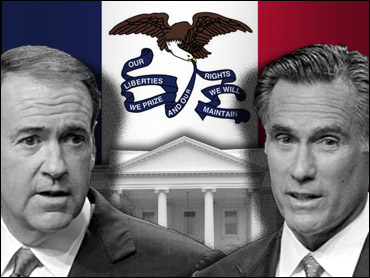 Mike Huckabee, is making a big move on Mitt Romney's long-held position as the front-runner among Iowa Republicans, according to a new CBS News/New York Times poll.

While Romney still holds the lead at 27 percent in the poll, Huckabee comes in a strong second at 21 percent, with a 5 percent margin of error.

The poll also shows that Democrats are headed toward a heated showdown in Iowa, where Hillary Clinton holds a statistically insignificant lead over John Edwards and Barack Obama.

Among likely caucus-goers, Clinton came out on top with 25 percent support, but she was trailed closely by Edwards at 23 percent, and Obama at 22 percent. With a margin of error of 4 percentage points, there is no clear leader. Trailing behind was Bill Richardson, at 12 percent, with all other candidates in single digits.

The situation in Iowa, where nominating caucuses are scheduled for Jan. 3, is in stark contrast to New Hampshire, where Clinton and Romney continue to hold large leads among those likely to vote in the state's first-in-the-nation primary, which could come only days after Iowa's contests.

But in both states, large chunks of voters have yet to make up their minds, meaning the results of the contests that will kick off the 2008 nominating season are still difficult to predict.

While the Democratic contest in Iowa has been a three-way battle for some time, most polls have shown Romney, a former Massachusetts governor, with a strong lead in the Hawkeye State, dominating the GOP field. Recent surveys have shown Huckabee picking up steam, but the CBS News/New York Times represents his best showing to date.

In the poll, Rudy Giuliani was in third in Iowa at 15 percent. All other candidates were in single digits, including Fred Thompson, who had 9 percent support among likely caucus-goers.

While Huckabee's strong showing would seem to be a surprise, CBSNews.com senior political editor Vaughn Ververs said it's the attention he's paid to the state coupled with his conservative message that is paying dividends.

"A poll, of course, is simply a snapshot in time and we'll need to see more evidence of a Huckabee surge before buying into it totally," "But it's not surprising to see him gaining. Iowa is a state tailor made for Huckabee's candidacy and message." (Read more in CBSNews.com's campaign blog, Horserace)

"Huckabee is a very good candidate in the sense he makes a very good appearance," CBS News chief Washington correspondent Bob Schieffer said. "I think that Huckabee actually has a chance to win out there… If he does, that puts a whole new spin on the race."

"I'm still not sure he would be the favorite to get the nomination, but he's certainly going to be a factor as we move on down the road," Schieffer added.

While Romney still has the lead in Iowa, his support base is softer than that of Huckabee, a former Arkansas governor whose campaign has gained momentum in recent weeks. Half of Huckabee supporters said they had made up their mind, compared to two-thirds of Romney supporters who said they could change their mind before caucus night. Overall, 57 percent of GOP caucus-goers said they haven't settled on one candidate.

Huckabee could run into trouble if immigration is as important an issue as the poll indicates. When asked what issue candidates should discuss, illegal immigration topped the list at 20 percent, and 44 percent of caucus-goers said illegal immigrants should lose their jobs and leave the country. Huckabee has been criticized for supporting pre-natal care for immigrants and educational opportunities for the children of immigrants, and only 13 percent said Huckabee agreed with them on this issue, compared to 26 percent for Romney.

However, immigration may not be a deal-breaker: 75 percent said they could support a candidate who is less conservative than they are. This could offer hope to Huckabee, but not to Giuliani. While 38 percent said he was the most electable of the GOP candidates, likely caucus-goers were split nearly evenly on whether they could support a candidate who disagreed with them on social issues like abortion and gay marriage - Giuliani favors abortion rights and supports extending gay rights, though he does not support same-sex marriage.

Meanwhile, on the Democratic side in Iowa, the contest appears also appears to going right down to the wire. None of the top three has firmed up their support yet - about half of those backing each candidate said they could change their minds before caucus night.

Despite that fluidity, there are some clear patterns that show how important it will be for each candidate to turn out certain groups of voters: Women have a strong preference for Clinton, while those under the age of 45 give Obama a double-digit lead. Obama and Clinton are nearly tied for support among first-time caucus-goers, but previous attendees give Edwards a narrow edge over Clinton.

The findings indicate that if older and established voters dominate turnout, the caucuses could be a two-way contest between Clinton and Edwards. If the Obama campaign succeeds in its bid to bring young voters and first-time caucus-goers out on Jan. 3, however, it could leave Iowa with a win and a crucial momentum boost headed into later contests. Doing so will be a challenge: Only a third of possible first-time attendees say they will "definitely" attend the caucuses, compared with six in 10 of previous attendees.

One factor in Obama's favor is that nearly two-thirds of the state's independent voters who plan on voting on Jan. 3 say they'll attend the Democratic caucus. Obama attracts the support of 37 percent of those voters, compared to only 17 percent for Edwards and 15 percent for Clinton.

The priorities of Iowans will also be crucial. Clinton is seen as the most electable in November 2008 by a wide margin. However, Obama is clearly seen as the most likely to bring about change in Washington and Edwards holds a strong edge on the question of who understands the problems of Iowans.

Edwards and Obama may also want to spend time making sure supporters of second-tier candidates see them favorably: Among those favoring other candidates besides them and Clinton, Edwards was the second choice of 30 percent, while Obama was close behind at 27 percent. A supporter of any candidate getting less than 15 percent support on the first count at a caucus is allowed to switch to another candidate or enter an "uncommitted" group.

As contentious as Iowa is, the next state on the campaign calendar, New Hampshire, is far less competitive. Among likely Democratic primary voters, Clinton has 37 percent support, putting her 15 points ahead of Obama. Among Republicans, Romney continues to dominate. He was backed by 34 percent in the poll, while John McCain and Giuliani both trailed at 16 percent. All other candidates were in single digits.

Clinton's support in the Granite State is solid. Though 52 percent of voters say they could change their mind, 62 percent of Clinton supporters "strongly favor" the New York senator and former first lady. As in Iowa, her experience is the top reason people are supporting her.

Many New Hampshire Republicans also have yet to make up their minds, even more so than Democrats. Among likely GOP primary voters, 66 percent said they hadn't made up their minds. Romney, unlike Clinton, has yet to solidify his support - only 31 percent of Romney backers said they had made up their mind. More than half of his supporters have reservations about him or are behind him because they dislike other candidates in the race. And the poll indicates Romney's religion could be a problem: more than one-in-four voters said they know someone who would not vote for a Mormon candidate.

In New Hampshire, sampling was done using standard RDD probability selection processes. In Iowa, the sample was drawn from three sources: the state of Iowa's registered voter list (matched to phone numbers where possible), an RDD phone sample with numbers that matched numbers on the registered voter list eliminated (in order to sample phone numbers unavailable on the state list), and a small cell phone sample.