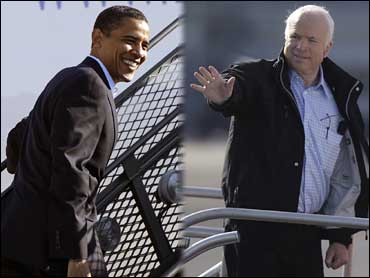 Barack Obama and John McCain uncorked massive get-out-the-vote operations in more than a dozen battleground states Sunday, millions of telephone calls, mailings and door-knockings in a frenzied, fitting climax to a record-shattering $1 billion campaign. Together, they'll spend about $8 per presidential vote.

With just two days to go, most national polls show Obama ahead of McCain. State surveys suggest the Democrat's path to the requisite 270 electoral votes - and perhaps far beyond - is much easier to navigate than McCain's.

Obama exuded confidence. "The last couple of days, I've been just feeling good," he told 80,000 gathered to hear him - and singer Bruce Springsteen - in Cleveland. "The crowds seem to grow and everybody's got a smile on their face. You start thinking that maybe we might be able to win an election on November 4th."

With just two days to go, most national polls show Obama ahead of McCain, and state surveys suggest the Democrat's path to the requisite 270 electoral votes - and perhaps far beyond - is much easier to navigate than McCain's.

In the latest CBS News poll, Obama leads McCain by 13 points among likely voters nationwide, and by 19 points among the 1 in 5 voters who have already cast ballots.

About 27 million absentee and early votes were cast in 30 states as of Saturday night, more than ever. Democrats outnumbered Republicans in pre-Election Day voting in key states.

That has Democrats - and even some Republicans - privately questioning whether McCain can overtake Obama, even if GOP loyalists turn out in droves on Tuesday. Obama may already have too big of a head start in critical states like Nevada and Iowa, which Bush won four years ago.

"This is off the charts in some of these states," said Michael P. McDonald, a political scientist at George Mason University.

"We feel good," Obama chief strategist David Axelrod said on CBS News' Face The Nation. "And it's not just the polls. It's the early voting that we've seen. About a third of the country is going to vote before Tuesday, and those numbers are coming in very strong for us and reversing some historical patterns."

Sen. Lindsey Graham, a Republican from South Carolina who is one of McCain's staunchest supporters, suggested on the same program that Republicans still have reason to hold out hope.

"What we've seen in the last two weeks is very much a tightening of the race in the states that matter," Graham said, adding: "I think the undecided voter in these key states will come our way."

As the campaign closes, voters were being inundated with a crush of television ads and automated phone calls.

Not to be outdone, the Republican National Committee rolled out battleground phone calls that include Hillary Rodham Clinton's criticism of Obama during the Democratic primary. She is heard saying: "In the White House, there is no time for speeches and on-the-job training. Sen. McCain will bring a lifetime of experience to the campaign, and Sen. Obama will bring a speech that he gave in 2002."

Obama and McCain campaigned on each other's turf Sunday. Obama was in Ohio, a bellwether state Bush won four years ago and where polls show Obama tied or winning. McCain visited Pennsylvania and New Hampshire, states won by Democrat John Kerry in 2004. He trails in both.

"I've been in a lot of campaigns. I know the momentum is there," McCain told supporters at a rally in Pennsylvania. Overall, polls show Obama winning or tied in more than a dozen or so states won by Bush while McCain trails in every Kerry state.

McCain and the RNC dramatically ramped up their spending in the campaign's final days and now are matching Obama ad for ad, if not exceeding him, in key battleground markets in states such as Florida, Ohio, North Carolina, Virginia and Pennsylvania.

After months of planning, the Republican Party launched the last stage of its vaunted "72-hour program," when volunteers descend on competitive states for the final stretch. Democrats unleashed their "persuasion army" of backers scouring their own backyards to encourage people to back Obama in the campaign's waning hours.

More than 10,000 Obama volunteers in Ohio were knocking on doors and planning to hit their one millionth home Sunday after a five-day push.

His campaign reported that Saturday was its largest volunteer day, with more volunteers showing up to work the phones and walk neighborhood precincts than ever before in the campaign. Said Obama spokesman Bill Burton, "Our volunteers are completely engaged."

McCain's crew says theirs are, too.

"There's no doubt that we've got an uphill battle," said Rich Beeson, the RNC's political director. But, he said, "I'm not going into Election Day with any trepidation that they've put any state away" by banking early votes. "We still have a lot of voters that we can and will turn out."

The RNC reported making 5.4 million voter contacts last week, compared with 1.9 million in the same week in 2004, and it says it's volume has steadily increased since October began. Overall, it says 26 million voters have been contacted by volunteers over four months.

On Saturday alone, the RNC says an estimated 3 million voters were contacted by phone or in person, and it saw so many volunteers show up to help that in at least one state, Colorado, the party ran out of canvassing packets. Some 180,000 were gone by midday Saturday; more were printed.

Obama planned visits to Florida, North Carolina and Virginia on Monday and a quick stop in Indiana Tuesday morning.