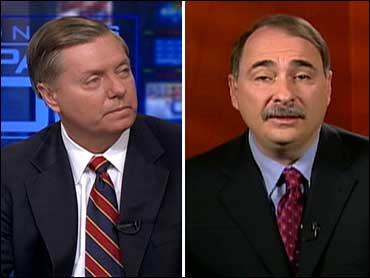 With just two days before Election Day, top advisers to both Barack Obama and John McCain appear to be confident of their candidate's chances.

"We feel good," Obama chief strategist David Axelrod said on CBS News' Face The Nation. "And it's not just the polls. It's the early voting that we've seen. About a third of the country is going to vote before Tuesday, and those numbers are coming in very strong for us and reversing some historical patterns. In states like North Carolina, it looks like as many as three million people may vote before Tuesday, and where that vote is coming from and the addition of so many new voters is something we're encouraged by.

"And the crowds we're seeing: I'm here in Springfield, Missouri, which is a traditionally Republican part of the state. We had a crowd of 40,000 people here last night, very enthusiastic crowd late at night. Three times as large as any crowd anybody has ever gotten here," he added. "And those things are encouraging, but we still have to win this thing. We have to vote and we can't be complacent. We have to fight to the end, and we will."

But Sen. Lindsey Graham, a Republican from South Carolina who is one of McCain's staunchest supporters, gave host Bob Schieffer a different view:

"What we've seen in the last two weeks is very much a tightening of the race in the states that matter," Graham said. "I really believe that Senator Obama is the virtual incumbent. And if he's not at 50 percent today in North Carolina, he's not going to win. We see closing in Nevada, New Mexico and Colorado, Missouri, Pennsylvania and Ohio. We have him under 50, in the margin of error. The intensity level in the last couple of weeks has been unbelievable on our side.

"I think the undecided voter in these key states will come our way. We're taking nothing for granted. We're campaigning hard," he added.

Who is Joseph McCarthy?

Of particular interest to both Graham and Axelrod is Pennsylvania. The state has gone for Democrats in the last four presidential elections, but the McCain campaign is fighting hard there for a Republican pickup, despite some poll numbers showing them well behind.

"The voter demographics in Pennsylvania [are] set up very much for the centrist candidate that Senator McCain is," Graham said. "Senator Obama is becoming more and more an out-of-the-mainstream, left-leaning economic candidate when it comes to redistribution of the wealth, and we see in our narratives that that is sticking, that people have a second look at Senator Obama in Pennsylvania, and they question his economic policies, his role of the court, and his experience to make us safe."

Axelrod points to a registration edge and organization as the keys to victory for his campaign.

"I feel good about what I see in Pennsylvania, starting with the fact that we have a registration edge that's twice as large as we had four years ago. It went from 300,000 in favor of Democrats to 600,000, so that right away gives me encouragement," Axelrod said. "I know that there have been a couple of late polls that suggest otherwise, but I've seen many more that work in our direction. And beyond which, I just feel, based on the organization we have on the ground, the reaction that we're getting, that we're going to do very well in Pennsylvania. We're going to work really hard at it."

On Election Day, in addition to the presidential race, there are several Senate seats up for grabs. Democrats appear likely to increase their advantage in the chamber, but Republicans look to minimize their losses. The heads of each party's campaign committees - Democratic Sen. Chuck Schumer, N.Y., and Republican Sen. John Ensign, Nev. - talked with Schieffer on Face The Nation.

(CBS)
Schumer (left) said that he thinks Democrats will get a "whole bunch" of seats, but also that it's "unlikely" they will reach the magic number of 60 for a filibuster proof Democratic-controlled Senate.

"As for 60, that's very, very difficult. It's possible, but unlikely," he said. "And the reason is because the terrain is so tough. In other words, of the 11 contested states, none are deeply blue. A whole bunch are deeply red. So even though the wind is at our back, it's hard."

Ensign agreed the Democrats are poised for some pickups, but said that many races were close.

"There's no question that we are facing a fairly strong political headwind at this point," he said. "And the Democrats are poised to pick up some seats. The exact number we don't know, because there's so many races that are within the margin of error.

(CBS)
"There's six or seven races out there right now," said Ensign (left), "including the race in Louisiana, where the Democrats are defending down there. We have that race dead even now. So it's going to be an interesting night on election night."

Schieffer also asked Ensign and Schumer asked about specific senators in the news recently - one up for reelection and one who is not.

Republican Sen. Ted Stevens of Alaska was convicted of seven charges this past week. Ensign said he thought Stevens should step down.

"I think it would have been better, first of all, for this to have happened last year. The Justice Department had the information. They should have done this last year, so the people of Alaska, if he was convicted, like he was, they could have had a clear choice between a Republican and a Democrat," he said. "Mark Begich couldn't have won that state if it would have been a clear choice between a Republican - a normal Republican running up there. The only way he can win - possibly win, is because Ted Stevens was convicted. I have said that it would be the best thing for Ted Stevens to step down and I said that last week."

Schumer, meanwhile, responded to speculation that Sen. Joe Lieberman, an Independent who endorsed and campaigns with McCain, would leave the Democratic caucus, or be kicked out.

"Leader Reid, who's a good friend of Joe's, has said we're not going to debate that, discuss it until after Tuesday, And I'm sticking with Leader Reid on that one," Schumer said. "So I'm waiting. We're going to wait until Wednesday to even discuss that, publicly or privately. There have been no discussions about it among our Senate leadership or in the caucus."

Ensign's response: "If Joe wants to leave the Democrat Party and join us, we'd welcome him with open arms."