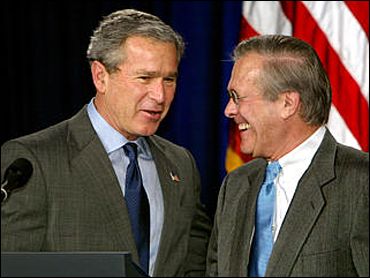 President Bush is standing by Defense Secretary Donald H. Rumsfeld as both men brace for the anticipated release of more pictures and video images showing Iraqi prisoners being abused by American soldiers.

Mr. Bush, who is facing eroding confidence in senior military ranks and declining credibility abroad, visits the Defense Department on Monday for a previously scheduled briefing that takes on new significance because of the torture and sexual humiliation of prisoners uncovered at the Abu Ghraib prison.

Mr. Bush has said he wants Rumsfeld to "stay in my Cabinet." But a chorus of criticism from Capitol Hill has at least one Republican wondering whether Rumsfeld, and perhaps Joint Chiefs of Staff Chairman Richard Myers, might have to step down.

Sen. Joseph Biden of Delaware told the CBS News Early Show Rumsfeld should resign, but the ranking Democrat on the Foreign Relations Committee said too much is being made of the question of Rumsfeld's continuance in office.

"I think this is somewhat bigger than Secretary Rumsfeld," he said. "I want to see the president do some swift and positive action here. Rumsfeld is part of the problem, not part of the solution. I don't care if he goes stand in a corner."

If convicted of all charges, Sivits could face one year in prison, reduction in rank to private, forfeiture of two-thirds of his pay for a year, a fine or a bad conduct discharge, military officials said. Penalties could include only one, all or any combination of those punishments, they added.

Kimmitt said Sunday the trial will be held in Baghdad and will be open to media coverage, but announced Monday that no television cameras will be allowed.

Sivits faces a bad conduct court-martial. At least some of those charged will likely face general courts-martial, which can bring more severe punishments — suggesting that he is considered to have played a lesser role in the abuses. The New York Times reports Sivits may have reached a plea agreement.

And The New Yorker reports that within the Pentagon, knowledge of the abuse charges was kept secret even from high-ranking officers who would normally have known about it. The magazine also published a newly released photograph from Abu Ghraib, showing a naked Iraqi man surrounded by U.S. soldiers holding dogs.

Last fall, the head of Guantanamo Bay, Maj. Gen. Geoffrey Miller, reviewed prisons in Iraq and suggested that military police serving as prison guards set "the conditions for the successful interrogation and exploitation of internees/detainees." The Army report on the Abu Ghraib abuse criticized that policy, but Miller now has been put in charge of the Baghdad prison.

In Britain, Prime Minister Tony Blair told a news conference Monday he did not know the specifics of Red Cross allegations of U.S. and British abuse of Iraqi prisoners until "the last few days."

Some Iraqi officials have called for an Iraqi role in the operation of Abu Ghraib and other detention centers in wake of the scandal over the abuse of Iraqi prisoners by American military guards.

Asked whether the new Iraqi government would assume control of Abu Ghraib after the transfer of sovereignty, coalition spokesman Dan Senor said Monday that the prison's status will be negotiated after the June 30 handover.