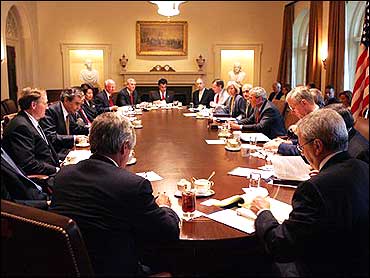 A congressional official says the administration will seek $10 billion aid as the first installment.

Mr. Bush earlier acknowledged the frustration of people who need food, water and shelter and are desperate for the federal government's massive relief effort to kick into high gear.

Already under criticism for his long vacation during wartime, the president moved quickly once returning to Washington to assert visible control over the relief effort, CBS News correspondent Bill Plante reports for the Early Show. Remembering that his father took a hit when people thought he didn't respond to Hurricane Andrew quickly enough, Mr. Bush set up a roster of eight U.S. ships, about 11,000 National Guard troops and units of the Army Corps of Engineers to assist hurricane recovery.

"I fully understand people wanting things to have happened yesterday," Mr. Bush said in a live interview in the Roosevelt Room of the White House with ABC. "I understand the anxiety of people on the ground. ... So there is frustration. But I want people to know there's a lot of help coming."

President Bush urged a crackdown on looting and crime that has spread throughout New Orleans.

"I think there ought to be zero tolerance of people breaking the law during an emergency such as this — whether it be looting, or price gouging at the gasoline pump, or taking advantage of charitable giving or insurance fraud," Mr. Bush said. "And I've made that clear to our attorney general. The citizens ought to be working together."

Bush, who spoke as tens of thousands of people were planned to be evacuated on buses from the Superdome in New Orleans to the Astrodome in Houston, more than 300 miles away, expressed sympathy for those still stranded.

"Thousands have been rescued, there are thousands more to be rescued," he said.

Mr. Bush also said: "I just can't imagine waving a sign that says 'Come and get me now.'"

Mr. Bush said he has not yet finalized plans to visit the areas of Louisiana, Mississippi and Alabama affected by the storm, but he is expected to go within days.

Parts of Louisiana seeing a wave of disaster response roll in have the feel of a war zone. CBS News correspondent John Roberts reports that adding to the state-sent armored vehicles, the Pentagon announced 10,000 National Guard troops are being sent in.

The cavalry is coming in, but only with boats. No water trucks or convoys of relief and medical supplies have been spotted, Roberts reports.

The new units brought the number of troops dedicated to the effort to more than 28,000, in what may be the largest military response to a natural disaster.

The Pentagon plans tow send a broad contingent of ships, aircraft, trucks, medical support and other personnel to support federal agencies already providing aid to gulf region, including 60 helicopters to be used for search and rescue operations, damage assessment flights and the distribution of supplies.

Meanwhile, Mr. Bush brushed off criticism that he did not return to Washington from his month-long stay at his Texas ranch on Tuesday, in the immediate aftermath of the hurricane. Upon returning Wednesday, he held a meeting with top government officials guiding hurricane relief and made remarks in the Rose Garden.

Plante reports that to encourage people to help, White House officials tell CBS News they're working on getting the two former presidents, George H.W. Bush and Bill Clinton, who helped after the Asian tsunami, together again for a cross-country fundraising tour.

what makes recovery from Hurricane Katrina different (video interview)
than past rescue efforts is that "we are conducting the rescue in the middle of the event. We still have to deal with ongoing flooding hampering the efforts."

"We have to understand that for every single person, even an hour seems like an eternity. We have to address the greatest needs first and then make sure everybody is safe," Chertoff said.

"We understand that for every single person there, even an hour seems like an eternity. We have to make sure we address those whose needs are the greatest first and then make sure we get everybody else," Chertoff said.

Mr. Bush has said the recovery will take years. He said the federal government has dispatched assistance to the Gulf Coast region, including 5.4 million precooked meals, 13.4 million liters of water, more than 1,000 search and rescue personnel and the floating hospital ship USNS Comfort.

It was just the first trickle of help that Washington planned to provide to Louisiana, Mississippi, Alabama and Florida, the president said.

With key Gulf Coast refineries and pipelines out of service, the Energy Department tried to keep fuel production steady by tapping an emergency government stockpile of oil and to temporarily ease pollution standards on gasoline and diesel fuel. But the president raised the possibility that the hurricane will lead to even higher gasoline prices and shortages in some areas.

Besides agreeing to release oil from the Strategic Petroleum Reserve, Mr. Bush said the administration has waved some Environmental Protection Agency regulations on blended fuel, which will mean there will be more fuel available, not only domestically, but also from imports. "Some fuels can't be used at this time of the season because of EPA regulations so we suspended it," Bush said. "Hopefully, that'll have some relief on price."

On Wednesday, Mr. Bush asked the pilot of Air Force One to fly over the Gulf Coast region as he returned to the White House from his Texas ranch so he could see the magnitude of devastation firsthand. He saw homes reduced to rubble in Mississippi and floodwaters creeping toward downtown New Orleans, submerging homes nearly to their rooftops.

"All the devastation that I saw was very emotional," the president said. "I mean I cannot describe to you what it looks like to see entire neighborhoods under water."

He said that while the terrorist attacks on Sept. 11, 2001 were a man-made disaster, the aftermath of Sept. 11 and Hurricane Katrina were "just as serious in both cases."