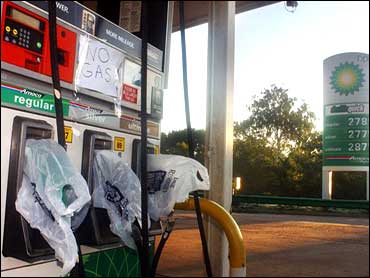 "Out of Gas" signs and yellow caution tape were draped across pumps in parts of the United States early Thursday after many retailers were overrun by panicked motorists looking to top off their tanks as prices soared past $3 per gallon and reports of shortages spread.

Gas stations in and around downtown Atlanta had temporarily run out of gas. The same was reported elsewhere, including parts of North Carolina, West Virginia, Wisconsin and Arizona. Many retailers who did have gas had no clue when their next shipments would come in.

"People have kind of panicked and they're waiting in long lines because they're afraid the prices are going to go up," said Jan Vineyard, executive director of the West Virginia Oil Marketers And Grocers Association. "We're going to have some outages."

Price hikes were first evident at stations nationwide Wednesday as gasoline costs breached $3 a gallon for the first time in numerous states, the result of fuel pipeline shutdowns and delayed deliveries since Hurricane Katrina devastated Louisiana and Mississippi earlier this week.

"Everybody is panicking. They think there's not going to be any gas," said Keturah Jackson, a clerk at a gas station in Atlanta's upscale Buckhead district.

Price hikes were evident at stations nationwide Wednesday as gasoline costs breached $3 a gallon in numerous states, the result of fuel pipeline shutdowns and delayed deliveries since Hurricane Katrina devastated Louisiana and Mississippi earlier this week.

In Washington, the Bush administration decided to release crude oil from the federal petroleum reserves after Katrina knocked out 95 percent of the Gulf of Mexico's output. But because of the disruptions and damage to the refineries, gasoline prices seemed to pay no heed.

Gas prices jumped by more than 50 cents a gallon Wednesday in Ohio, 40 cents in Georgia and 30 cents in Maine. The increases followed price spikes on wholesale and futures markets Tuesday after the hurricane knocked off-line refineries and pipeline links along the Gulf Coast that provide about a third of the country's gasoline supplies.

CBS affiliate KMTV in Omaha reports that prices jumped twenty to thirty cents overnight Wednesday, taking the price for a gallon of unleaded more than $3 per
gallon. One station had premium selling for $3.51 per gallon.

Measures across the U.S. are being advised to compensate for the high prices. North Carolina Governor Mike Easley Wednesday asked motorists across the state to reduce their driving time, CBS News reports.

Several gas stations in the Milwaukee area ran out of gas for several hours at the time, having to post "Out of Gas" signs at their pumps. The outages were blamed more on logistical problems on the supply end than any increase in demand.

"Everybody is really trying hard. But it has been very, very difficult to get enough gasoline," said Jim Fiene, senior vice president of the Open Pantry convenience store-gasoline station chain in southeast Wisconsin.

Concerns are now mounting over limited supplies of gasoline, including the possible return of long lines and scarcity reminiscent of the 1970s gas crisis.

"It's crazy," said Mike Currie of Bismarck, shaking his head as he topped off his truck's tank with gas. "I'm going to have to consider buying a Moped."

Analysts expected some relief once electricity is restored to Gulf Coast pipelines and refineries, but they are unsure how long that will take.

Crude oil prices, however, dipped Thursday after the Bush administration's decision to tap U.S. strategic reserves to help companies hurt by Hurricane Katrina, but gasoline futures jumped 3 percent because of worries about storm damage to refineries in the Gulf of Mexico.

This week's increases come atop a 40 percent price rise in the last year that boosted the average retail price of unleaded regular to $2.61 a gallon nationwide last week, Energy Department figures show.

"We don't have a shortage of gasoline. We have a delivery problem," said Bill Weatherspoon, executive director of the North Carolina Petroleum Council, which represents major retailers that get gasoline from the pipelines.

CBS News Correspondent Anthony Mason reports from Katrina came to Milwaukee Wednesday, where they woke up to $3 a gallon gas. Residents found that the price at the pump has jumped 30 cents in many cities.

"Who can afford that?!" complained one resident.

In Georgia, a few gas stations were charging as much as $6 per gallon Wednesday after other retailers had run out of gas and long lines were reported across the state. In response, Gov. Sonny Perdue signed an executive order authorizing state sanctions against gas retailers who gouge consumers.

"I'm frankly embarrassed for our state and some of our businesses that we have to do this," said Perdue, after pleading with Georgians to remain calm.

The market did receive some help Wednesday when the federal government said it would loan oil from the Strategic Petroleum Reserve to refiners facing shortfalls. And the Environmental Protection Agency said it would temporarily allow gasoline retailers nationwide to sell fuel that does not meet stringent summer air-quality standards.

"The EPA waiver was a big move," said John Kilduff, an analyst at Fimat USA in New York.

The problems soon could extend far beyond motorists' wallets. Energy experts say they are concerned about how hurricane damage to Gulf Coast natural gas and heating oil facilities will affect heating bills this winter. Rising jet fuel costs because of the hurricane also have put additional pressure on cash-strapped airlines.

In Georgia and North Carolina, state officials asked residents to conserve gas and government workers were ordered to limit nonessential travel. A suburban Atlanta vanpooling program also reported a 50 percent jump in participants since Hurricane Katrina slammed into the Gulf Coast on Monday.

The latest nonpartisan Field Poll found that California residents are changing their behavior as a result of high gas prices. Forty percent — and 54 percent of those making less than $40,000 — said they have cut back spending in other areas. About two-thirds of residents say they shop around for filling stations offering cheaper gas, and 59 percent said they are driving less.

Herbie Howard, who owns four stations in Toledo, Ohio, and supplies gas to 17 others, spent hours on the phone hunting a decent price from his suppliers. He had to pay $3.18 a gallon — 9 cents more than he was selling it for.

"We aren't making any money," he said. "We're just minimizing our loses, but no one believes you. They think we're price gouging."

Matt McKenzie, spokesman for from AAA-Northern New England, predicted gas prices would hit $3.70 to $3.80 by month's end in that region of the country, causing frugal motorists to begin carpooling, curbing errands and maybe even scaling back fall leaf-viewing trips.

At one of the few stations open, Steve Clifford, 48, pumped fuel into his Isuzu sport utility vehicle.

"I heard it was going to go up to $4 a gallon tomorrow and there were going to be shortages, so when I got home from work I kissed my wife goodbye and said I was going out to find gas," he said.