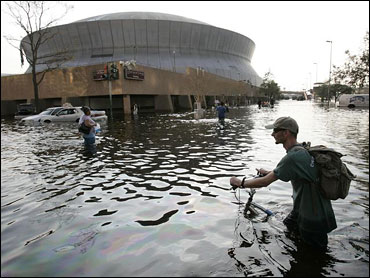 At the front of the line, the weary refugees waded through ankle-deep water, grabbed a bottle of water from state troopers and happily hopped on buses that would deliver them from the horrendous conditions of the Superdome.

At the back end of the line, people jammed against police barricades in the rain. Refugees passed out and had to be lifted hand-over-hand overhead to medics. Pets were not allowed on the bus, and when a police officer confiscated a little boy's dog, the child cried until he vomited. "Snowball, snowball," he cried.

The scene played out Thursday as the plodding procession out of the Superdome entered its second day — an evacuation that became more complicated as thousands more storm victims showed up at the arena.

CBS News Correspondent John Roberts reports that the Superdome evacuation had to be suspended after several people demanded rides out of town at gunpoint.

Capt. John Pollard of the Texas Air Force National Guard said 20,000 people were in the dome when the evacuation efforts began. By Thursday afternoon, the number had swelled to about 30,000. Pollard said people poured into the Superdome because they believe it's the best place to get a ride out of town.

The refugees began arriving Thursday at the Astrodome in Houston, where they got a shower, a hot meal and a cool place to sleep.

"I would rather have been in jail," Janice Jones said in obvious relief at being out of the dome. "I've been in there seven days and I haven't had a bath. They treated us like animals. Everybody is scared."

Miranda Jones, her daughter, was standing next to her, carrying her father's ashes — the only thing they were able to save from her house before Hurricane Katrina blasted New Orleans.

An angry Terry Ebbert, head of New Orleans' emergency operations, watched the slow exodus from the Superdome on Thursday morning and said the Federal Emergency Management Agency response was inadequate. The chaos at the nearby New Orleans Convention Center was considerably worse than the Superdome, with an angry mob growing increasingly violent and few options for refugees to leave the scene.

"This is a national disgrace. FEMA has been here three days, yet there is no command and control," Ebbert said. "We can send massive amounts of aid to tsunami victims, but we can't bail out the city of New Orleans."

After a day in line in the heat without water or food, dozens of people fell out. Medics poured water on them, fanned them, and tried to cool them down.

One woman, lying on a canvas cot, was in convulsions. Medics doused her with water and slapped her, trying to bring her around. A National Guardsman poured water on a baby he held while water was also poured on her mother.

The tile floor got wetter and wetter, and some people slipped and fell.

Meanwhile the crowd kept growing as stranded people heard about the buses and headed to the dome.

By early afternoon, a line of people a half-mile long snaked from the Superdome through the nearby Hyatt Regency Hotel, then to where buses waited. State troopers, making every effort to be cheerful, handed out bottles of water and tried to keep families and groups together.
"I need three," a burly state trooper called out. "I need four."

At one point, the guards held up the line so a young teen at the front could go get her sister, farther back.

The situation in the back of the line was vastly different.

National Guardsmen stood side by side with rifles. Luggage, bags of clothes, pillows, blankets were strewn in the puddles.

After a teenager was taken away by police for fighting, Capt. John Pallerre of the Texas Air Force National Guard told the crowd on public address: "We can't have people fighting. I have kids here who are crying and frightened and can't find their parents. Be adults. We're going to get you out of here. It takes a while. I'm not god. If I was, you'd all be home with your family."

After a traffic jam kept buses from arriving at the Superdome for nearly four hours, a near-riot broke out in the scramble to get on the buses that finally showed up.

At one point a man held a tiny baby high over his head. A woman pointed to an elderly man in a wheelchair — hoping to get the attention of National Guard troops who were taking the old and infirm to buses first.

A woman in tank top and shorts, her teeth chattering, was taken from the sea of people and into the line heading through a shopping mall and conference center and back out to buses waiting blocks from the dome. She cuddled her baby, who wore only a diaper.

While refugees waited for a ride to Houston, the air ambulance service in charge of taking the sick and injured from the Superdome suspended flights after a shot was reported fired at a military helicopter. Richard Zuschlag, chief of Acadian Ambulance, said it was too dangerous for his pilots.

A fire erupted in a trash chute inside the dome, but a National Guard commander said it did not affect the evacuation.

The first buses left the Superdome late Wednesday, and officials in Texas said 2,000 people had already arrived at the Astrodome, some 350 miles away, by late morning Thursday. Besides the 25,000 or so hurricane refugees being brought to Houston, officials said another 25,000 would be taken to San Antonio and other locations.

The Astrodome's new residents will be issued passes that will let them leave and return as they please, something that wasn't permitted in New Orleans. Organizers also plan to find ways to help the refugees contact relatives.

Also, the state of Texas is rolling out a even bigger welcome mat for evacuees from Hurricane Katrina. Officials are agreeing to take another 25 thousand displaced residents, bringing the grand total up to 75 thousand.

The cities of Dallas, Houston and San Antonio will become a new home for storm refugees, many from hard-hit New Orleans.

Already, the Astrodome in Houston and Dallas' Reunion Arena have been converted into giant shelters. Now, a warehouse in San Antonio and its Joe Freeman Arena will also be used to house people.

San Antonio Mayor Phil Hardberger hopes for a system where evacuees can get their needs resolved in one central place. He says he hopes to restore "some dignity which these circumstances have taken away from" storm refugees.

The American Red Cross is also running shelters in other Texas cities.