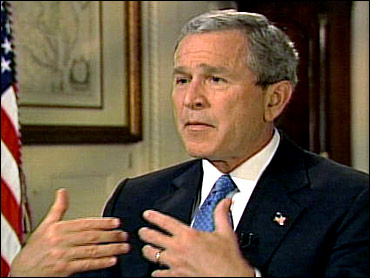 Angry lawmakers called on Defense Secretary Donald Rumsfeld to come to Capitol Hill to testify on Thursday while Senate leaders — Republicans and Democrats alike — discussed a Senate resolution to condemn the abuse of Iraqi prisoners by U.S. soldiers.

Rumsfeld is scheduled to testify for two hours, and will also meet privately with senators. The chairman of the Joint Chiefs will also take part.

The number of prisoner deaths in Iraq and Afghanistan known to be under U.S. investigation or already blamed on Americans rose to 14.

While Bush said he retained confidence in Rumsfeld, White House aides said the president let the secretary know he was not satisfied with the way he was informed about the unfolding controversy. In particular, Bush was unhappy about not knowing about the pictures before they were shown on television.

Rumsfeld did not know about the images until aired them last Wednesday, a senior White House official said. The photos showed prisoners hooded and nude, forced into sexual positions and piled together. One was attached to wires and was allegedly told that he might be electrocuted.

Acknowledging mistakes but stopping short of an apology, President Bush told the Arab world on Wednesday that Americans are appalled by the abuse and deaths of Iraqi prisoners at the hands of U.S. soldiers in interviews televised on Arab television. He promised "justice will be delivered."

"The people in the Middle East must understand that this was horrible," Bush said, trying to calm international outrage. He went on two Arabic-language television stations to take control of the administration's damage-control efforts.

The difficulty of Bush's task became clear in the first question of an interviewer who said the evidence of torture made many Arabs believe that the United States was no better than Saddam Hussein's government, notorious for torture and murder. The president murmured under his breath at the comparison.

Bush said the abuses were "terrible" for America's image abroad. "I think people in the Middle East who want to dislike America will use this as an excuse to remind people about their dislike," he told Al-Arabiya television, a satellite channel based in Dubai, United Arab Emirates, that is popular around the Arab world.

Around the world, newspapers and magazines have seized on the torture to pour scorn on American promises of democracy for Iraq. Many Arab commentators believe the president's statement does nothing to change that, reports CBS News Correspondent Bill Plante.

"It's too late and too little to be honest," said Abdel Bari Atwan, editor of Al Quds newspaper.

Excerpts from a report on the abuse completed March 3 by Maj. Gen. Antonio Taguba, were likely to further stoke fury at home and abroad.

Surveys in the Arab world already show deep skepticism of American policy from Israel to Afghanistan, and pollster James Zogby says in Iraq this could be a fatal blow, reports Plante.

Six months before the U.S. election, the prisoner-abuse controversy poses a major problem for Bush, already on the defensive about rising American casualties and persistent violence. Portraying itself as the provider of freedom in Iraq, the administration finds itself rocked by condemnation over pictures of American soldiers gloating over naked prisoners and scenes of abuse at the U.S.-run Abu Ghraib prison near Baghdad.

Separately, the administration asked Congress Wednesday for an additional $25 billion for U.S. operations in Iraq and Afghanistan, congressional Republicans said, a change from the White House's earlier plans not to seek such money until after the November elections.

Sen. John Kerry, Bush's Democratic rival, said the president's remarks were not enough. "The president of the United States needs to offer the world an explanation and needs to take appropriate responsibility, and if that includes apologizing for the behavior of those soldiers and what happened, then we ought to do that," Kerry said.

Bush said that what happened at Abu Ghraib was "more than an allegation, in this case, actual abuse — we saw the pictures. There will be a full investigation." He said he retained confidence in Rumsfeld.

Interviewed on the U.S.-sponsored Al-Hurrah television network, Bush said that Iraqis "must understand that I view those practices as abhorrent. They must also understand that what took place in that prison does not represent the America that I know." Most U.S. soldiers are "good, honorable citizens that are helping the Iraqis every day," Bush said.

"It's also important for the people of Iraq to know that in a democracy, everything is not perfect, that mistakes are made," the president said.

Drawing a distinction with Saddam's government, he told Al-Arabiya, "A dictator wouldn't be answering questions about this."

While Bush did not offer an apology, Condoleezza Rice, his national security adviser, had said Tuesday that "we are deeply sorry for what has happened," and the commander of U.S.-run prisons in Iraq, Maj. Gen. Geoffrey Miller, apologized Wednesday for the "illegal or unauthorized acts" of U.S. soldiers.

There was mixed reaction in the region to Bush's remarks.

In his interviews, Bush notably skipped the popular Qatar-based Al-Jazeera, which the United States has accused of lying about the situation in Iraq to inflame Arab viewers. At the end of his remarks, he told the Al-Hurra interviewer, "Good job."

Bush was vague about whether the International Red Cross and human rights organizations would be granted access to the U.S.-run prisons.

McClellan said the IRC already can enter American-run facilities, but sidestepped repeated questions about admission for human rights organizations. "What's important as we move forward on these series of investigations that are under way is that the process is open and transparent," McClellan said.

The U.S. military, which had reviewed Iraq prison policies in the fall for an undisclosed reason, launched three probes and two related inquiries after the photographs came to light in January. Six military police face are facing criminal charges as a result of the probes and seven officers have been disciplined administratively.