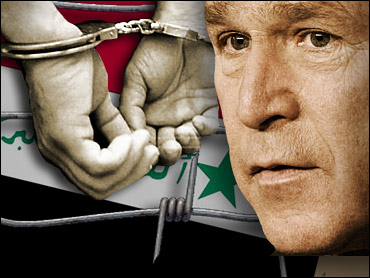 
In an effort to stem the growing tide of outrage in the Arab world over the abuse of Iraqi prisoners, President Bush took the unusual step of condemning the mistreatment on two Arab television stations, though he has yet to speak directly to the American people.

The interviews were an admission by the Bush administration that the issue has reached grave levels internationally. Yet by not speaking stateside to the abuse, President Bush hopes to avoid any domestic political damage.

Although the White House spokesman later said the president was "sorry for what occurred," Mr. Bush himself did not offer an apology. He did call the abuse "abhorrent" and said "the actions of these few people do not reflect the hearts of the American people," in an interview on Al-Hurra, a U.S.-government funded station in Iraq.

In emphasis, Mr. Bush leaned forward and brought his hands to his chest as he spoke, saying with a stiff, concerned expression, "This is not America."

But to many in the Arab world this abuse is America.

"The photographs [of U.S. troops mistreating Iraqi detainees] are hugely damaging because they reinforce the prevalent sentiment which is one of utter humiliation and these just imprint that on the psyche of people in the region," said Shibley Telhami, who holds the Anwar Sadat chair at the University of Maryland and is a Middle East specialist at the Brookings Institution.

The photos showed prisoners hooded and nude, forced into sexual positions and piled together. One was attached to wires and was allegedly told that he might be electrocuted.

"Those pictures reinforce that the U.S. is an occupying power in Iraq; and two, that the instruments being used, the sexual images, are especially humiliating in a culture where the concept of shame is so deeply ingrained that some people even unfortunately justify killing in order to restore honor," Telhami continued. "Today, there is far more humiliation in the Arab world than there was a week ago."

Arab public opinion of the United States was already at historic lows because of the war in Iraq and what is seen as Mr. Bush's open-ended endorsement of Israeli Prime Minister Ariel Sharon. However, Telhami said, it is the consistent instability in Iraq that has inflamed Arab public opinion most.

"You know the looting that took place immediately after the war, you only have one shot to make a good first impression and we lost that shot and it's been an uphill battle since," he said. "But the two most important decisions that were made that had a bad consequence were the dismantling of the Iraqi army and the dismantling of the Baath which demolished the two biggest bureaucracies that had influence in Iraq and there was nothing to replace them."

The adversarial relationship between Iraqis and the U.S.-led coalition reached new heights last Wednesday when CBS News' "60 Minutes II" first aired the graphic photographs of U.S. soldiers' abusing Iraqis at the Abu Ghraib prison near Baghdad. The prison was already notorious to Iraqis because of abuse there under Saddam Hussein's regime.

Having topped Arab news reports for days, the photographs have led to wide-ranging protests in Iraq. Prior to the images going public, the majority of Iraqis already saw the U.S. military as occupiers and desired American soldiers' immediate departure, according to a USA Today poll published last week.

"We want to make sure that if there is a systemic, in other words a problem system-wide, that we stop the practice," said President Bush on Al-Arabiya, a Dubai based pan-Arab network that has a strained relationship with the U.S.-installed Iraqi Governing Council.

"It is very important for people, for your listeners, to understand that in our country when an issue is brought to our attention of this magnitude we act and we act we act in a way where leaders are willing to discuss it with the media," Mr. Bush said. "We act in a way where our Congress asked pointed questions to the leadership, where people want to know the truth; that stands in contrast to dictatorships."

Yet one Arab authority says President Bush missed a prime opportunity to apologize for the abuse of Iraqi prisoners. In a phone interview, former Arab League Ambassador Clovis Maksoud said, "An apology would have defused the tremendous amount of anger."

Telhami disagreed, saying that "the issue of apology is not the central issue."

"The reality of it is that it is a good thing that [President Bush] spoke and obviously it is much better than not doing it," he said. "But it could have gotten worse in terms of intensity."

Following the pictures going public, damage control by the White House became an immediate priority. Since then, the Pentagon has announced seven U.S. soldiers have received reprimands, six of which were the most severe. None have been cited for abuse.

"The president going on Arab networks before he explained this to the American people is extraordinary, I have never heard of anything like this before," said Alan Lichtman, a presidential historian at American University in Washington. "He's got to deal with this in the Arab world but doesn't want to make this a big political issue in the election so he does not address the issue in any substantive way here at home."

Speaking to reporters Wednesday, Democratic presidential candidate John Kerry called the abuse "horrifying," adding that it "has the potential of putting our troops in further jeopardy." Kerry said that the world needs to hear President Bush say that the United States "regrets any kind of abuse" and "let me just assure you if I were president we would have a very different set of activities than what is going on in Iraq today."

Kerry called for a Pentagon-wide investigation while the ranking Democrat on the Senate Foreign Relations Committee, Sen. Joe Biden, said that if Defense Secretary Donald Rumsfeld was aware of the abuse he should resign. Mr. Bush said he will not call for Rumsfeld's resignation.

The political implications of the abuse stateside remain unclear. If there was a cover-up and senior officials are shown to have known of the extent of the abuse then it will certainly have some affect on the presidential election.