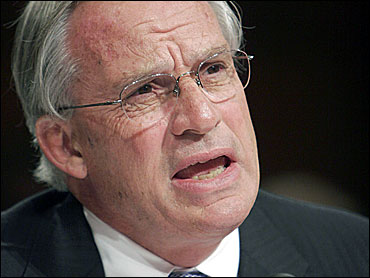 The FBI is investigating whether the No. 3 official at the CIA improperly intervened in the award of contracts to a businessman who has been implicated in a congressional bribery scandal, a law enforcement official said Monday.

CIA Executive Director Kyle "Dusty" Foggo already was under investigation by the agency's inspector general in connection with his relationship to San Diego businessman Brent Wilkes.

The FBI recently opened its own probe of Foggo, a longtime and close friend of Wilkes, the official said, speaking only on condition of anonymity because the investigation is under way.

Foggo has decided to retire from the CIA following the resignation last Friday of CIA Director Porter Goss, an intelligence official said Monday, also speaking on condition of anonymity. The official noted that new CIA directors have traditionally chosen their own executive directors, who run the agency's day-to-day operations.

Last week, the CIA released a statement on Foggo's behalf in which he denied any improprieties. "Mr. Foggo maintains that government contracts for which he was responsible were properly awarded and administered," the agency said.

Wilkes has been described in court papers as an unindicted coconspirator in a plot to bribe then-Rep. Randy "Duke" Cunningham, now serving a federal prison term for taking $2.4 million from government contractors.

FBI agents also have been looking into whether Wilkes supplied Cunningham with prostitutes, limousines and hotel suites. Foggo sometimes attended poker parties at the hotel rooms, but he said there was nothing untoward about his presence.

"If he attended occasional card games with friends over the years, Mr. Foggo insists they were that and nothing more," the CIA statement said.

Wilkes' attorney, Michael Lipman, did not immediately respond to messages left Monday by The Associated Press. But he has said that Wilkes denied the allegations of prostitution, which were raised by a second defense contractor who has pleaded guilty in the case.

Meanwhile, lawmakers raised questions Monday about Department of Homeland Security contracts to Shirlington Limousine and Transportation Inc., the Arlington, Va., company at the center of the prostitution investigation.

Company attorney Michael York said in an interview last week that the company and its president, Christopher Baker, are cooperating with the federal investigation, but he denied any company involvement in improper or illegal activities. York did not immediately return a call for comment on Monday.

Democrats on the House Homeland Security Committee sent a letter Monday to the department's inspector general questioning whether Shirlington Limousine was qualified to get the two contracts it was awarded by the department, one for $3.8 million in April 2004 and another for as much as $21 million over five years in October 2005.

The committee plans to discuss the contract at a previously scheduled May 18 hearing on contracts, hiring processes and security clearances.

"The information we've obtained raises a number of serious questions, from the contracting process to possible security concerns," said Rep. Mike Rogers, R-Ala., chairman of the subcommittee on management, integration and oversight. "The appearance of a lack of background checks on contractors is another troubling personnel issue at DHS that we are examining."

Homeland Security Department spokesman Larry Orluskie said the more recent contract with Shirlington Limousine, which is a $21.2 million pay-on-performance agreement of up to five years, is "performing exactly as expected."