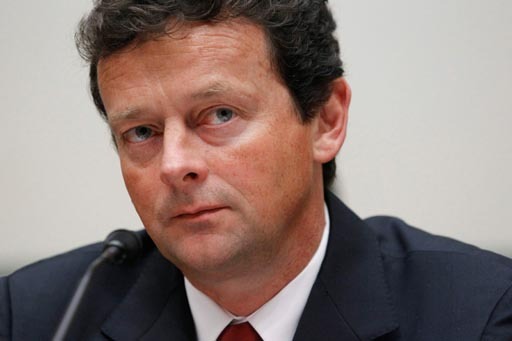 This commentary is by CBSNews.com Editor-in-Chief Daniel Farber.

BP CEO Tony Hayward didn't help his personal cause much in histestimony before the House Committee on Energy and Commerce subcommittee.

He was consistently evasive, maintaining that he was not involved in the decision-making that may have led to the disaster in the Gulf or that he couldn't recall things.

Of course, subcommittee members, many of whom are lawyers, could hardly have expected Hayward to come clean. By asserting his ignorance of the situation and deferring any other salient information, admissions or conclusions until a thorough investigation has been completed at some undetermined time, he avoided doing more damage to BP's precarious legal and financial position.

As chief executive, Hayward wasn't likely involved in day-to-day operations at the Deepwater Horizon rig and the Macondo well. But as CEO of the oil giant, which generated $239 billion in revenue for 2009,  claiming ignorance is not a defense, it's a legal strategy.

After 59 days, he has more than a clue as to what decisions were potentially fatally wrong and who was responsible for making them before the Deepwater Horizon disappeared into the Gulf of Mexico and oil started pouring out.

For example, the letter from House members Henry Waxman (D-Calif.) and Bart Stupak (D-Mich.) to Hayward on June 14 outlined several issues related to decisions around the Macondo well that could have been factors in the blowout.

The letter also said that  BP executives may have been under pressure to complete drilling of the Macondo well because Transocean's Deepwater Horizon rig was 43 days late for its next drilling location, costing BP as much as $21 million in leasing fees.

Among the factors cited in the letter was the number of centralizers, which keep the well casing in the center of the borehole as it is lowered into the well.  Following is a portion of the letter that describes the interactions among BP executives and contractors on the rig about the centralizers:

On April 15, BP informed Halliburton's Account Representative, Jesse Gagliano, that BP was planning to use six centralizers on the final casing string at the Macondo well. Mr. Gagliano spent that day doing a computer analysis of a number of cement design scenarios to determine how many centralizers would be necessary to prevent channeling. With ten centralizers, the modeling resulted in a "MODERATE" gas flow problem. Mr. Gagliano's modeling showed that it would require 21 centralizers to achieve only a "MINOR" gas flow problem.

Mr. Gagliano informed BP of these results and recommended the use of 21 centralizers. After running a model with ten centralizers, Mr. Gagliano e-mailed Brian Morel, BP's drilling engineer, and other BP officials, stating that the model "now shows the cement channelling" and that ''I'm going to run a few scenarios to see if adding more centralizers will help us or not." Twenty-five minutes later, Mr. Morel e mailed back:

"We have 6 centralizers, we can run them in a row, spread out, or any combination of the two. It's  a vertical hole, so hopefully the pipe stays centralized due to gravity. As far as changes, it's too late to get any more product on the rig, our only option[ ] is to rearrange placement of these centralizers."

The following day, April 16, the issue was elevated to John Guide, BP's Well Team Leader, by Gregory Walz, BP's Drilling Engineering Team Leader. Mr. Walz informed Mr. Guide: "We have located 15 Weatherford centralizers with stop collars ... in Houston and worked things out with the rig to be able to fly them out in the morning." The decision was made because "we need to honor the modeling to be consistent with our previous decisions to go with the long string."  Mr. Walz explained: "I wanted to make sure that we did not have a repeat of the last Atlantis job with questionable centralizers going into the hole." Mr. Walz added: "I do not like or want to disrupt your operations . . .. I know the planning has been lagging behind the operations and I have to turn that around."

In his response, Mr. Guide raised objections to the use of the additional centralizers, writing: " it will take 10 hrs to install them . .. . I do not like this and ... I [am] very concerned about using them."

"Even if the hole is perfectly straight, a straight piece of pipe even in tension will not seek the perfect center of the hole unless it has something to centralize it."

"But, who cares, it's done, end of story, will probably be fine and we'll get a good cement job. I would rather have to squeeze than get stuck ....So Guide is right on the reward equation."

On April 17, Mr. Gagliano, the Halliblllton account representative, was informed that BP had decided to use only six centralizers. He then ran a model using seven centralizers and found this would likely produce channeling and a failure of the cement job. His April 18 cementing design report states: "well is considered to have a SEVERE gas flow problem." Mr. Gagliano said that BP was aware of the risks and proceeded with knowledge that his report indicated the well would have a severe gas flow problem.

Mr. Gagliano's findings should not have been a surprise to BP. As noted above, BP's mid-April plan review found that if BP used a single string of casing, as BP had decided to do, "Cement simulations indicate it is unlikely to be a successful cement job." Nonetheless, BP ran the last casing with only six centralizers.

During the House hearing, Rep. Jay Inslee (D-Wash.) asked Hayward about emails concerning the centralizers. He declined to address any of the specifics in the letter or discuss any of the people associated with the incident.

"I don't want to be evasive or difficult, but until we understand all that contributed to the accident, it's not easy to say," Hayward said.

He also repeatedly said, "If there is any evidence that people put cost ahead of safety, we will take action," and declared that there is no evidence of "recklessness" on the part of BP, contradicting President Obama's characterization of the company's drilling operations in the Gulf.

It's no wonder that Congress and people suffering on the Gulf coast, among others, don't believe that the BP CEO was forthcoming enough or credible in his testimony in his appearance Washington DC.

Hayward is a man following legal advice to "not recall" certain events, and desperately trying to keep BP and his own "rig" from sinking.