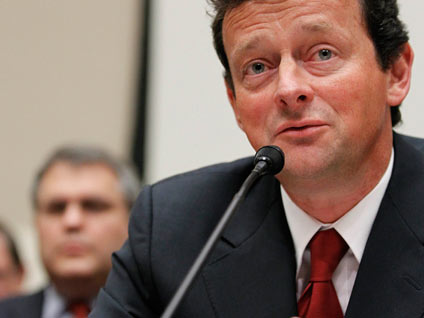 BP CEO Tony Hayward Doesn't Recall
The first phase of BP CEO Tony Hayward's testimony before a House panel was marked by claims of being "deeply sorry" and "personally devastated" by the environmental calamity that has unleashed millions of barrels of oil into the Gulf of Mexico.

The catch phrase of phase two was decidedly different: "I was not part of the decision-making process," he stated as lawmakers peppered him over alleged safety shortcuts that contributed to the deadly explosion aboard the Deepwater Horizon oil rig 59 days ago (watch the video at left).

The often terse exchanges with members of the House Committee on Energy and Commerce subcommittee were notable more for what Hayward didn't say, frustrating lawmakers looking for specific answers about the company's decisions leading up to the disaster from the man in charge of the oil giant.

Asked by subcommittee Chairman Rep. Bart Stupak whether the company had reached any conclusions about the causes of the accident, Hayward said the "investigation is ongoing."

"You have not reached a conclusion that BP cut corners?" asked Stupak.

"I think it's too early to reach conclusions, Mr. Chairman," Hayward replied.

Faced with more non-answers from Hayward on the company's safety performance, Rep. Henry Waxman, D-Calif., said he was "amazed at this testimony."

"You're not taking responsibility, Mr. Hayward. ... You're kicking the can down the road."

Hayward, clearly prepared for a barrage of congressional venom, may have calculated that saying nothing was in the best interest of his company. His testimony, after all, could impact BP share prices and future litigation.

With that in mind, Hayward may as well preface each answer with "On the advice of counsel."

As the hearings resumed, Hayward's rope-a-dope testimony continued to frustrate the subcommittee members. "You are copping out, and you are the captain of the ship," said Rep. Phil Gingrey (R-Georgia).

When asked about decisions made on the Deepwater Horizon rig that may have led to the disastrous oil spill, Hayward said, "I was not aware of any decisions around the well as it was being drilled." He added that the decisions were made by the drilling organization in the Gulf of Mexico who have the technical expertise.

"If there is any evidence that people put cost ahead of safety, we will take action," Hayward said, as a counterpoint to his refrain that he was not involved in the decision-making process. He also stated that he has not seen any evidence of reckless behavior related to the incident.

Rep. Jay Inslee (D-Washington) pointed to emails indicating that BP officials on the rig made decisions for expediency the contractor Halliburton said could result in a severe gas flow problem.

Concerning the risk, BP Engineer Brett Cocales wrote, "Who cares, it's done, end of story, will probably be fine."

"I don't want to be evasive or difficult, but until we understand all that contributed to the accident, it's not easy to say," Hayward said in response to Inslee's questioning.

Rep. Peter Welch (D-Vermont) asked Hayward about a number of past safety violations, including 760 safety violations in the past five years and $373 million in fines, which is far greater than BP's competition incurred.

Hayward responded that the company made major changes to processes and people since he took over the CEO spot in January 2007.

Yet, after 59 days and ongoing investigations by the U.S. government and BP, the CEO could not say specifically who made the decisions that may have contributed to the disaster in the Gulf.